With tourism picking up again after Israeli dropped COVID-related restrictions, the Ministry of Tourism is working to improve some key sites in the Holy Land.

Following a major storm in May that destroyed portions of the Tiberias promenade at the Sea of Galilee tourist center, the government has allocated $26 million for its restoration and for the general development of the promenade and other tourism projects in the city of Tiberias.

“We are putting Tiberias back to the front line of tourist cities in Israel. The tourism season is at its peak, and we are working as fast as we can to restore the livelihood of the residents and business owners in the city,” said Tourism Minister Yoel Razvozov. “Today, at last, the many years of neglect in Tiberias have come to an end.  All of Israel wants the city to be successful and to restore Tiberias’ ability to host crowds of tourists, which will inject money into the city and the country.”

The Ministry of Tourism has established a budget of $20 million for the first phase of the rehabilitation project, which includes the Yigal Allon Promenade and Hayarkon Street.

The redevelopment project was triggered by massive storms that pounded the area between May 14-15. Much damage was sustained by public buildings and infrastructure along the city's promenade and beaches on the southwest shores of the Sea of Galilee. 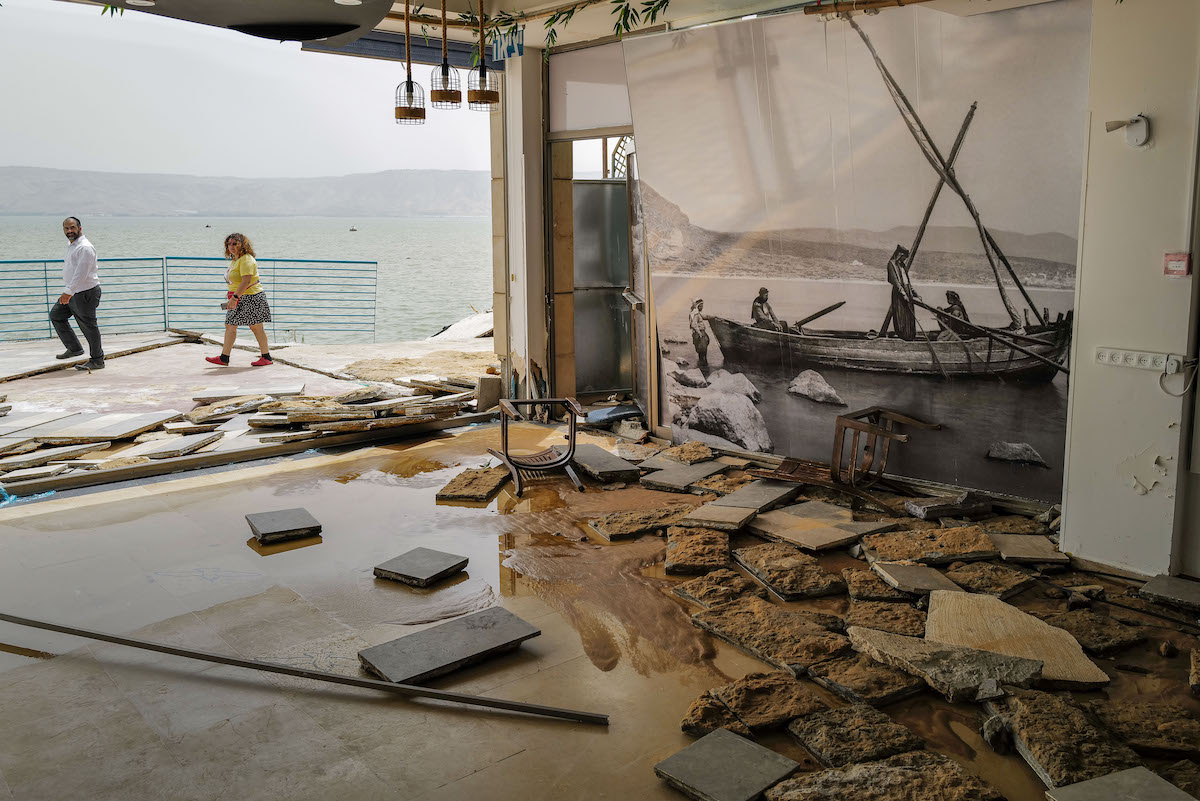 The damage caused to the promenade in Tiberias as a result of strong winds, May 15, 2022. (Photo: Michael Giladi/Flash90)

The government has also approved a plan to clean up a substantial stretch of the Jordan River, located south of the Kinneret Lake – more commonly known abroad as the Sea of Galilee. The stretch in question, all of which is on the Israeli side of the river – runs from the Kinneret to where the river meets the Bezek Stream (Wadi Shubash), some 23 miles south. The plan was approved at the beginning of the week.

South of this stream, the river makes up the Israeli-Jordanian border.

The Jordan River and the Jordan River Valley which is part of the great Syrian-African Rift Valley, was a major highway for migration of early humans between Africa, Europe and Asia and still forms a migratory path for many animal species, mostly birds. It is featured in many stories held dear to Judaism, Christianity and Islam.

Nevertheless, this portion of the river south of the Sea of Galilee has been reduced to less than a polluted trickle due to its overuse by those living nearby.

It has also been affected by the dam that was built at the southern end of the Kinneret in the 1960s, reducing what had been a run off of some 1.2 billion cubic meters annually to 30 million cubic meters today. Added to this, only mildly treated wastewater has been flowing into the river bed from a nearby treatment facility and salty water being pumped from saltwater springs beneath the Sea of Galilee to keep the lake from becoming too saline.

The Water Authority’s plan to improve the river has two main components: to first block the entry of waste and salt water into the river and secondly to increase the flow of fresh water from the lake up to a maximum of 70 million cubic meters annually.

This would allow for swimming in the river again and for rehabilitation of the ecosystem of the river and along its banks.

A second part of the plan involves the distribution of fresh water, and salty and treated water for use by farmers in the Jordan Valley.

The further south one travels from the Sea of Galilee the greater the change in climate and soil conditions. Close to the lake, a variety of crops can be grown with some needing fresh water irrigation, rather than the salty water that is readily available nearby.