Democratic Party leadership in the U.S. House of Representatives caved to pressure from other Democrats on Tuesday and dropped funding for Israel’s Iron Dome defense system from the upcoming U.S. budget.

The large sum would have been used to restock Israel’s Iron Dome interceptors – crucial to Israel’s protection from rocket attacks – which was depleted during the 11-day conflict between Israel and Hamas in May.

While Democratic leaders made the commitment to approve the funding by the year's end in a must-pass bill, the current delay is the latest chapter in an ongoing debate over support for Israel.

For decades, Congress has always had shown bipartisan support for Israel's right to defend itself, lately however, a group of Democratic lawmakers has increasingly called on party leaders to revisit its relationship with Israel. Some have accused Israel of human rights abuses and mistreatment of Palestinians.

Israeli Foreign Minister Yair Lapid spoke with U.S. House Majority Leader Steny Hoyer on Tuesday night after it became known the Iron Dome funding would not be in the spending bill.

During the phone call, Hoyer reassured Lapid that the incident was a “technical delay” over discussions about the U.S. debt and that Israel’s defense funding would be approved “at a later date,” according to a statement from the foreign minister.

Hoyer emphasized his ongoing commitment to Israel’s security – a commitment he said is shared by the White House and Democrats in the House and Senate and pledged that the Iron Dome funding would soon be allocated, according to the Ministry of Foreign Affairs.

The announcement was made amid pressure from pro-Israel Democrats, such as Ted Deutch, Josh Gottheimer, Ritchie Torres, Brad Schneider and others who did not agree with the decision to have the Iron Dome budget allowance removed from the bill.

“It is my intention to bring to this floor a suspension bill before the end of this week that will fund fully Iron Dome. I was for that. I’m still for it, we ought to do it,” said Hoyer. “I talked to the foreign minister, Mr. Lapid, just two hours ago and assured him that bill was going to pass this House.”

“Minister Lapid thanked Majority Leader Hoyer for his commitment and stressed the need to approve the request as quickly as possible to ensure Israel’s security needs,” Hoyer's office stated.

A congressional aide who spoke with The Times of Israel on condition of anonymity, allegedly insisted that the Iron Dome funding would eventually be approved, but would instead be attached to the 2022 Defense Appropriations Bill.

According to Barak Ravid of Axios, Israeli officials blamed this latest development on 12 years of policies initiated by former Prime Minister Benjamin Netanyahu, which harmed America’s bipartisan support for Israel.

However, Rep. Jamaal Bowman of New York provided an additional insight, saying the main issue was that the Iron Dome provision had been added into the bill late in the process, without any proper discussion.

“It’s not about Israel. It’s about, once again, leadership. Throwing something on our table last minute and expecting us to decide in five minutes what to do with it. That’s the bigger problem,” Bowman said.

Yet it seems the delayed funding approval indicates deeper divisions over Israel among Democrats.

Meanwhile, Republicans lashed out at out Democrats for allowing this happen, accusing party officials for giving in to pressure rooted in anti-Semitic rhetoric.

“Tragic,” Sen. Ted Cruz, D-Texas, wrote. “Dem leadership surrenders to the anti-Semitic Left. They hate Israel so much that Dems are stripping $1 BILLION in funding for Iron Dome — a purely defensive system that protects countless innocent civilians from Hamas rockets. Will any Dems have the courage to denounce?”

House Minority Leader Kevin McCarthy tweeted: “Democrats just pulled funding from the Iron Dome — the missile defense system that has saved countless lives in Israel from Hamas’ rocket attacks. While Dems capitulate to the antisemitic influence of their radical members, Republicans will always stand with Israel.”

There was a rally of support and solidarity from several pro-Israel Democrats who expressed frustration over the removal of Iron Dome funds.

U.S. Congressman Ted Deutch, D-Fla., added that the “Iron Dome is a defensive system used by one of our closest allies to save civilian lives. It needs to be replenished because thousands of rockets were fired by the Hamas terrorists who control Gaza. Consider this my pushing back against this decision.”

Rep. Josh Gottheimer, D-N.J., said the Iron Dome missile system “protects innocent civilians in Israel from terrorist attacks and some of my colleagues have now blocked funding it. We must stand by our historic ally — the only democracy in the Middle East.”

Rep. Ritchie Torres, D-N.Y., tweeted: “A missile defense system (i.e., Iron Dome) defends civilians from missiles. Hence the name. Only in a morally inverted universe would this be considered a ‘controversy.'”

Congressman Brad Schneider, D-Ill., said, “Israel has a new government with the broadest imaginable governing coalition, including Arab parties. Israelis and Palestinians are talking to each other again. The Abraham Accords are changing the dynamic of the entire region. All progress starts with and depends on security. And security relies on Iron Dome funding.”

U.S. Defense Secretary Lloyd Austin commented on plans to replenish Israel’s Iron Dome anti-missile batteries in June after meeting with Israeli Defense Minister Benny Gantz on the issue. At the time, U.S. President Joe Biden also pledged to replenish Israel’s stock, with Republican Sen. Lindsey Graham said that “Iron Dome performed incredibly well, saving thousands of Israeli lives and tens of thousands of Palestinian lives. I would imagine that the administration would say yes to this request, and it will sail through Congress.” 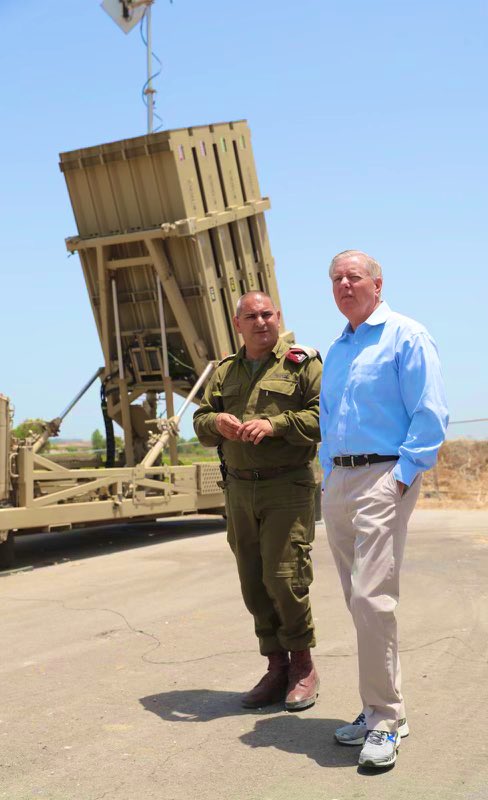 According to Israel Defense Forces, 90% of the missiles fired at populated areas within Israel were downed by Iron Dome during the 11-day Israel-Gaza conflict in May when Hamas and other Gazan-based terrorist groups fired over 4,300 rockets at Israel.