JERUSALEM—The only living Israeli leader ever to order the IDF to bomb and destroy a foreign nuclear program has very strong views about the current nuclear threat posed by the Iranian regime.

In part 2 of his exclusive interview with ALL ISRAEL NEWS, former Israeli Prime Minister Ehud Olmert told me in no uncertain terms that he does not support a unilateral, pre-emptive, comprehensive Israeli military attack on Iran’s nuclear facilities.

Such an attack, he argues, would only set back Iran’s atomic weapons program by a few years, at best.

Worse, it would create a justification for Tehran to publicly, officially and openly choose to build nuclear weapons in defiance of Israel – and create more sympathy for the regime from its allies and terrorist proxies.

The situation in Iran today, Olmert told me, is vastly different than what he faced in September 2007.

Then, Israel faced the threat of a single nuclear reactor being built in Syria.

Almost no one knew the reactor existed.

It was not operational.

It was above ground, not built inside caves and mountains.

And it was not guarded by surface-to-air missiles and other defensive systems.

Thus, Olmert’s advice to Israel’s current government is to work closely with the United States to thwart Iran’s nuclear ambitions – not to go solo.

“I trust President Biden just as much as I trusted the other presidents of America that they will do everything in their power to prevent Iran from building atomic bombs,” Olmert said.

“We have America as an ally, as long as we will be smart enough to know how to build up this cooperation with America and not to antagonize America, not to embarrass America, not to be provocative,” he added. 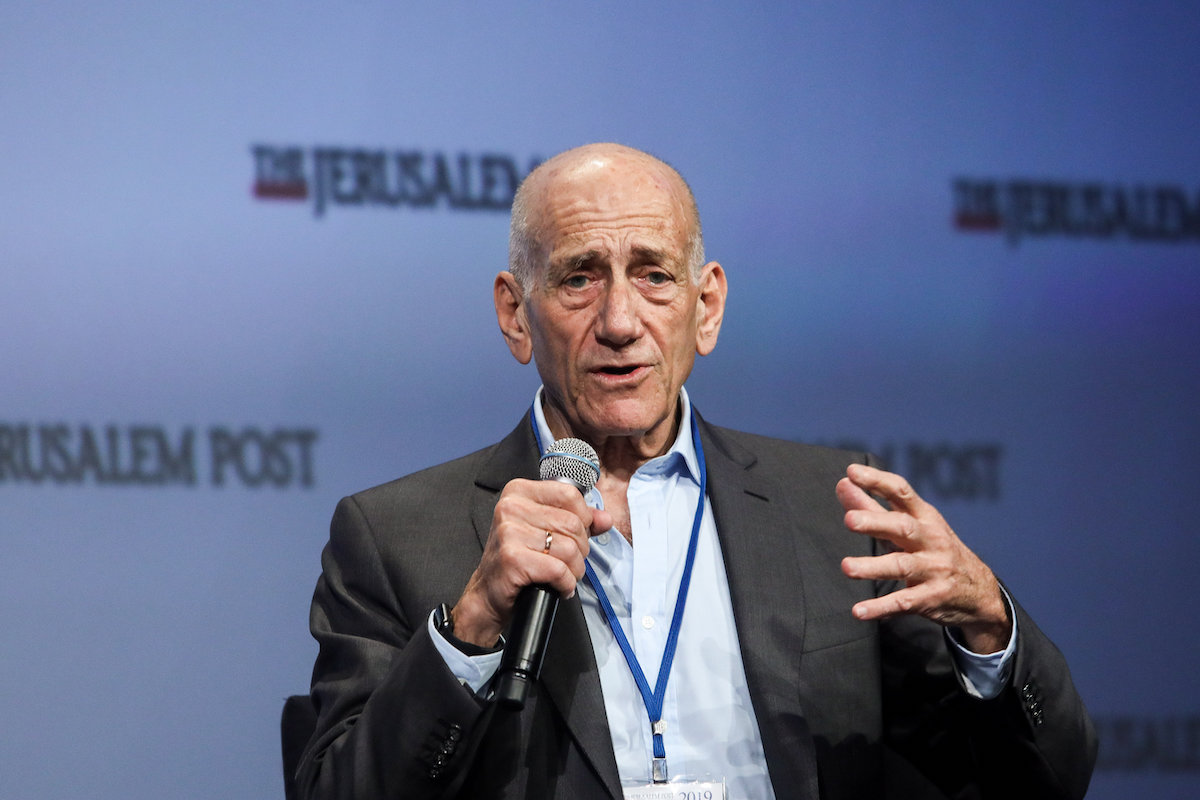 Olmert clarified that he does, in fact, hold to the strategic policy forged by then-Prime Minister Menachem Begin – what became known as the “Begin Doctrine” – that Israel must never allow a hostile foreign power to build a nuclear program that could create weapons capable of threatening Israel’s existence.

But Israel must be shrewd in how it uses its overt – and covert – options.

Though Olmert sat down with me for this interview almost a year ago, he reiterated his views in a phone call yesterday.

Nothing that has happened in the region has changed his mind that Israel must stay closely tied to the U.S., and not to go rogue.

He believes his experience in destroying the Syrian reactor in 2007 – and neutralizing the Iranian-Hezbollah threat in Lebanon since 2006 – gives him a unique vantage point to counsel current Israeli leaders.

As I noted in yesterday’s article, Olmert was harshly criticized at home and abroad for seeming to poorly handle the Second Lebanon War in 2006.

At one point, his approval ratings in Israel dipped to just 17% in the wake of the fighting.

But Olmert notes that the Israel-Lebanon border has been quiet for the past 15 years.

He argues that he was far more “brutal” against Hezbollah than his critics will admit, and that Iran and Hezbollah have not launched a new missile war against Israel because they know the devastating response that awaits them.

Given the rising tensions with Iran – and the fact that Hezbollah now has some 150,000 missiles pointed at Israel in southern Lebanon – Olmert’s perspective is worth listening to.

Here is the transcript of part 2 of our interview, lightly edited for clarity.

ROSENBERG: You have been sharply criticized for how you handled Hezbollah in 2006. What’s your response?

FORMER PRIME MINISTER EHUD OLMERT: I want to say something to allow you to understand more accurately where I stand when sometimes you tend to disagree with me.

Look, when it comes to [our] security, and to fight the enemies of the State of Israel, you will not find in the modern history of my country, someone who did more than I did.

When Hezbollah started their attack in July of 2006, I hit back. And it probably was not understood at that time – but now I think that is widely understood – that the pain that they suffered was so, so much that for 15 years they didn’t shoot one bullet out of Lebanon against Israel because they are still deterred, and afraid of the possible Israeli reaction.

So, I didn’t hesitate for one second.

When Hamas was attacking Israel in the south, we did a costly operation, and we killed more Hamas people than were killed in the most recent Israeli operations.

No one will threaten the life of Israel when I am the prime minister. And I will not hesitate to use all the power that we have in order to respond. And we did.

That is something that must be understood. 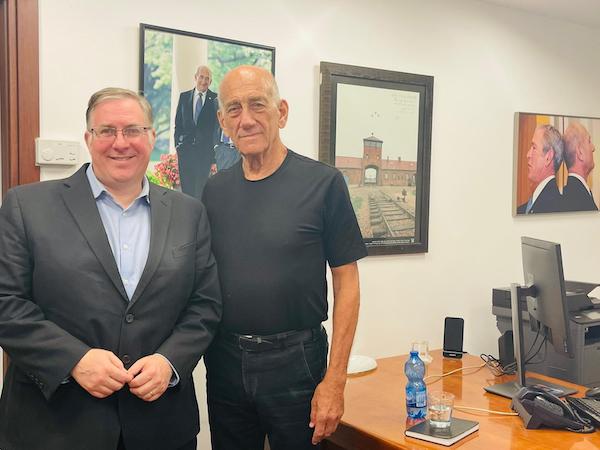 ROSENBERG: Okay, now, let me ask you: What lessons have you drawn from hitting [the nuclear reactor in] Syria and how do you apply them to the situation with Iran?

I have read that you have said in the past that you don’t support a military strike on Iran.

Obviously, it’s a very different situation today than what you faced. You had one target, with all its complexities.

Today, Israel would have many targets to deal with in Iran.

What is your basic strategic advice to the current government or a future government?

OLMERT: I wish I could share with you what I did to damage the Iranian nuclear plan over the years.

ROSENBERG: That’s another book for another time?

OLMERT: Another book for another time. And it will be much more exciting than everything that I've told you up until now, including the Syria reactor.

But I don't think that Israel can seriously engage in a comprehensive military attack against Iran.

I think that if we'll try to do it, the best we can do is to delay the program for a couple of years.

But we will create the circumstances that will allow the Iranians – from their point of view – to make these nuclear [weapons] plans official, public, and at least seem legitimate by their allies and the proxies who support them.

[Iran’s leaders will say], “We were attacked without any provocation by us….The Israelis attacked us and they only proved that we need to have an atomic nuclear weapon.”

ROSENBERG: Okay, but it's interesting to hear that because you are not a Likudnik – well, you were once – but followed the Begin Doctrine, right?

ROSENBERG: The Begin Doctrine is that we [Israel] will never allow some foreign country – an enemy – to build nuclear weapons.

OLMERT: But I trust President Biden just as much as I trusted the other presidents of America that they will do everything in their power to prevent Iran from building atomic bombs….

We have America as an ally, as long as we will be smart enough to know how to build up this cooperation with America and not to antagonize America, not to embarrass America, not to be provocative.

So, that's the point.

The Begin Doctrine is that you don't allow anyone, any of your enemies, to have nuclear power.

Although, Pakistan is not exactly a friend of ours. But they do have nuclear power and they do have missiles that have the range of coming to Israel. And we didn't do anything.

But, okay, Iran is different.

OLMERT: Together with the United States.

ROSENBERG: Okay. Last question, and it will all tie together.

After the 2006 Lebanon War, you argue that Israel got 15 years of peace, or at least quiet.

So, if Israel does attack Iran’s nuclear facilities, Iran’s first line of defense is to unleash Hezbollah on Israelis, right?

OLMERT: I would say two things.

In the last 15 years, many things happened in the Middle East, including that the chief of staff of Hezbollah lost his life and they thought that we did it.

Now, I don’t know who did it, but they felt that we did it, and they didn't react because their fear of the Israeli response to their attack prevented them from doing it.

So, the question is not how many weapons do you have, but whether or not you want to use them. That’s number one.

So, the question is not how many rockets you have, but what is the price that you pay for using that?

I can tell you one thing. I can promise you that when the day will come and they will want to use them, so they will find that maybe they can’t do that [because of the onslaught of Israeli retaliation].

But this is not something that I suggest that we will discuss in public.