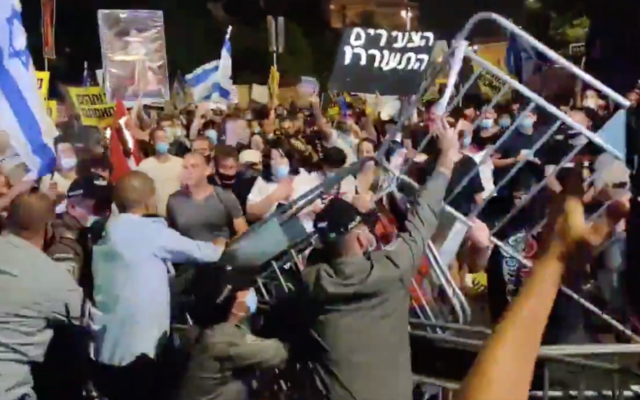 Fed up Israelis take to the streets in mass demonstrations

With many Israelis reeling from the economic consequences of a national shutdown including severe restrictions on the cultural sector and the complete shuttering of international tourism, thousands took to the streets for the fourth consecutive night of protests on Tuesday.

The anger and general unrest sweeping through Israel is coinciding with an unemployment rate of 21 percent and a serious spike in the number of coronavirus cases at the same time. In just the past 24 hours, 1,681 new cases of COVID-19 were confirmed — the worst single day for new cases in Israel since the beginning of the outbreak.

Nearly a quarter of all of Israel’s COVID-19 cases since the pandemic started have been recorded in the past week.

Meanwhile, some 50 people were arrested in Jerusalem after a demonstration — which started at the Prime Minister’s residence — turned violent. Protestors carried signs calling Netanyahu the “crime minister.” Netanyahu is awaiting trial on corruption and fraud charges.

Residents of ultra-Orthodox neighborhoods that are under lockdown also protested closures that went into effect on Friday. Protesters threw stones and other objects at police while some dismantled the gates put at the entry to their neighborhoods.

A main trigger for these mass demonstrations was Israel’s version of Marie Antoinette’s “Let them eat cake” — a flippant comment made by Cabinet minister Tzachi Hanegbi when he said it was “utter bull****” that people are going hungry. Negbi’s comment have become a rallying cry against what many criticize as a bloated, out-of-touch government.

Accordingly, Prime Minister Benjamin Netanyahu’s approval ratings are plummeting. While the prime minister was extolled for his handling of the pandemic in the spring following border closures and quick shutdowns, it appears that he was distracted by other looming political issues and the formation of his coalition.

“Rather than staying laser-focused on managing the public health situation and the reopening of the economy, Netanyahu was ... planning for the annexation of large portions of the West Bank,” Joel Rosenberg, an Israeli-American political analyst and author, told CNBC. “As a result, the pandemic is surging again and this is causing tremendous damage to the economy, and to the millions of Israelis who are out of work and struggling to make ends meet.”

Israel has more than 40,000 confirmed cases of COVID-19 with almost 200 people in serious condition and 375 deaths.

Professor Hagai Levine, an epidemiologist at the Hebrew University-Hadassah, said the situation is not as bad as it seems since Israel increased its lab testing capacity and changed its definition to include testing of asymptomatic contacts.

Rosenberg said Netanyahu has to return his focus to dealing with the fallout of a pandemic that hasn’t yet gone away.

“He can absolutely turn things around, but let’s face it, this is the most serious drop in Netanyahu’s approval ratings that we’ve seen in quite some time,” he said.