WASHINGTON – Senator Lindsey Graham, one of the most respected foreign and defense policy experts in Washington, fears a new war may be coming to the Middle East sooner than most people realize.

In a phone interview with me yesterday, the South Carolina Republican explained that the “Iranians are progressing at a very dangerous pace” with their uranium enrichment and nuclear weapons development program.

The problem, he said, is that the Biden administration and international community are not doing nearly enough to stop them.

As a result, Graham said, Israel is in a very difficult position and may need to take preemptive military action on its own.

“There are certain red lines that Israel will not allow Iran to cross,” Graham told me. “And I’ve never been more worried about those red lines being crossed than I am right now.”

Before leaving office, then-Israeli Prime Minister Benjamin Netanyahu made it clear to Washington that “we will make our own decisions about an existential threat coming from a nuclear armed Iran,” Graham noted.

The senator said he likes new Israeli Prime Minister Naftali Bennett and believes his position on the Iran threat is the same as Netanyahu’s.

But, he said, the test for Bennett is coming. If the Biden administration keeps pursuing an updated version of the flawed Iran nuclear deal known as the Joint Comprehensive Plan of Action (JCPOA), and the mullahs keep getting closer and closer to weapons grade uranium, Bennett and his colleagues may have no choice but to use military force.

“I’ve never been more worried about Israel having to use military force to stop the program than I am right now.”

Graham added that if former U.S. President Donald Trump was still in office, and Tehran so brazenly pursued nuclear weapons in defiance of the international community, Trump would not have left the mess in Israel’s lap.

“I think President Trump unequivocally would have used military action to stop a nuclear armed Iran,” Graham said. “And I think the Iranians knew that.” 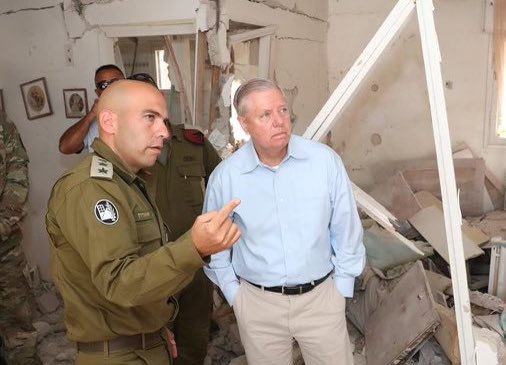 US Sen. Lindsey Graham visiting an apartment in southern Israel that was hit by a rocket launched by Hamas during the Gaza conflict in May, 2021 (Photo: Lindsey Graham Twitter feed)

Here is the full transcript of our conversation.

ROSENBERG: What's the state of play right now with Iran, the JCPOA and their bid for The Bomb?

SENATOR GRAHAM: Well, the state of play is that the Abraham Accords have changed the Mideast, that the Biden administration doesn’t realize that the last four years have [involved] fundamental change, that the “maximum pressure” campaign against Iran weakened Iran and emboldened our allies to stand up to the [Iranian] regime.

So, the problem with the JCPOA is that it creates a [uranium] enrichment program and the idea of giving Iran industrialized enrichment and hoping the international community can contain it, I think, is a nonstarter. I think the Arabs will go down the road of enrichment. The JCPOA legitimizes enrichment capability for the Iranians. So, the Arabs are going to start their own enrichment program and they have a nuclear arms race, enrichment arms race. That's a nightmare for Israel. There are red lines that Israel will not allow Iran to cross and are getting very close.

So, I've come up with an alternative to the JCPOA with Senator Bob Menendez, a Democrat, chairman of the Foreign Relations Committee. We're saying Iran can have a nuclear power program, but the fuel will come from the international community. We will have an international fuel bank. You don't need to enrich. And the Arabs, I believe, will say, “Sign us up for that.” So, I think a better end state would be nuclear power for the Gulf Arab states and the Iranians, with the spent fuel rods being provided by the international community, and nobody needs to enrich.

ROSENBERG: And that's essentially what the Emiratis have agreed to, right, for their program?

GRAHAM: Exactly. This is the Emirati concept applied to Iran and the Arabs writ large. This was the original French position. But the Iranians said, no. What this will do is it will smoke the Iranians out. They're not trying to build nuclear power plants for peaceful purposes. They’re trying to build an enrichment program to create a bomb. That’s what they want. That’s what they’re trying to do. But this concept would allow them what they say they want, which is nuclear power, and deny them what we're afraid they're going to get – a bomb. If they say no, which I’m sure they will, we'll have them on the record, having a chance to have nuclear power without enrichment. And they said no because they want a bomb. I think it makes a stronger case to use military force down the road if you have to.

ROSENBERG: Ok, now, on that last point, you've suggested publicly on Fox News recently that you've never been more worried than you are right now about a war between Iran and Israel. Talk to me about that, if you would.

GRAHAM: The [Iranian] enrichment program has gotten stronger during this period of time. They’re increasing their enrichment capability to 60%, in order to get to 90% which is bomb grade. This is well beyond what the JCPOA limits were. And it seems to me that their program has matured in a very dangerous way. And as I've said before, there are certain red lines that Israel will not allow Iran to cross. And I've never been more worried about those red lines being crossed than I am right now.

I think Israel is making a statement that’s a bit different than in the past. Bibi, in particular, has said that as much as we admire and need America, we will make our own decisions about an existential threat coming from a nuclear armed Iran. So, the Israelis are being put in a box here as the Iranians continue to enrich and the international community continues to do almost nothing to stop it. You’re putting a burden on Israel. And I’ve never been more worried about Israel having to use military force to stop the program than I am right now.

ROSENBERG: What’s your assessment of our new Israeli prime minister, Naftali Bennett, and his team.

GRAHAM: I like him. I think he’s been strong against a nuclear armed Iran. I doubt it would be a big change of position in terms of opposing the JCPOA. I'm sure that Bennett and Lapid will oppose it. But the test for him is going to be: Will you tell the Americans that, “If we have to, we will use force”? You know, Israel is in a box here. They're going to have to make a clear statement to the region and to the United States that there are certain things we can’t allow to happen and we'll go out on our own if we have to. So, we'll see. We'll see what happens. We'll see if Bennett will be that clear.

ROSENBERG: Now, of course, Jordan’s King Abdullah is in Washington this week. And looking at the Sunni Arabs, what's your sense of things. If Israel felt it had no choice but had to strike Iran’s nuclear facilities, would they have the support of our moderate Arab allies?

GRAHAM: I think Israel has to go into this thing clear-eyed, I mean, to expect the Arab world to rally around a strike on Iran is probably unrealistic, though I think a lot of people in the Arab world would be happy if Israel neutered Iran. I don't think there would be a massive uprising in the Arab world if Israel had to act. Let’s just put it that way, OK?

But I think Israel’s got to make a decision. The survival of the Jewish state is at play here.

GRAHAM: I don’t know. I’m going to get briefed about the state of play here, but all I can say is that the Iranians are progressing at a very dangerous pace.

ROSENBERG: All right. Last question for you on this, and I appreciate it very much. If President Trump and Vice President Pence were still in office, do you think we would be in a position in which the United States might feel it had to take preemptive action?

GRAHAM: I think President Trump unequivocally would have used military action to stop a nuclear armed Iran. And I think the Iranians knew that.

ROSENBERG: All right. This is very helpful. Sobering, but helpful.

IDF raids foiled 500 terrorist attacks in the past year

The coming central banking digital system – the end of money as we know it, part I