JERUSALEM, ISRAEL – David Friedman may be out of office, but don’t call him retired.

The 63-year-old former New York attorney and former U.S. Ambassador to Israel during all four years of the Trump-Pence administration has a smile on his face, a spring in his step and a lot on his plate these days.

On Wednesday, I sat down with him and his wife, Tammy, in their lovely apartment in Jerusalem, adorned with dozens of family photos, Jerusalem artwork, and various mementos of his time as a member of the inner circle of the White House Middle East strategy team.

Over cappuccinos, I presented them with a copy of my new book, "Enemies and Allies: An Unforgettable Journey inside the Fast-Moving & Immensely Turbulent Modern Middle East."

In return, I was blessed to get a sneak preview of the much-anticipated memoir the ambassador will publish in February, "Sledgehammer: How Breaking with the Past Brought Peace to the Middle East."

We also, of course, discussed his powerful (and beautifully-shot) documentary film series, “The Abraham Accords,” that he hosted and produced for TBN, the world’s largest Christian television network.

I’ll report more on both the book and the film series in Part Two of my exclusive interview. 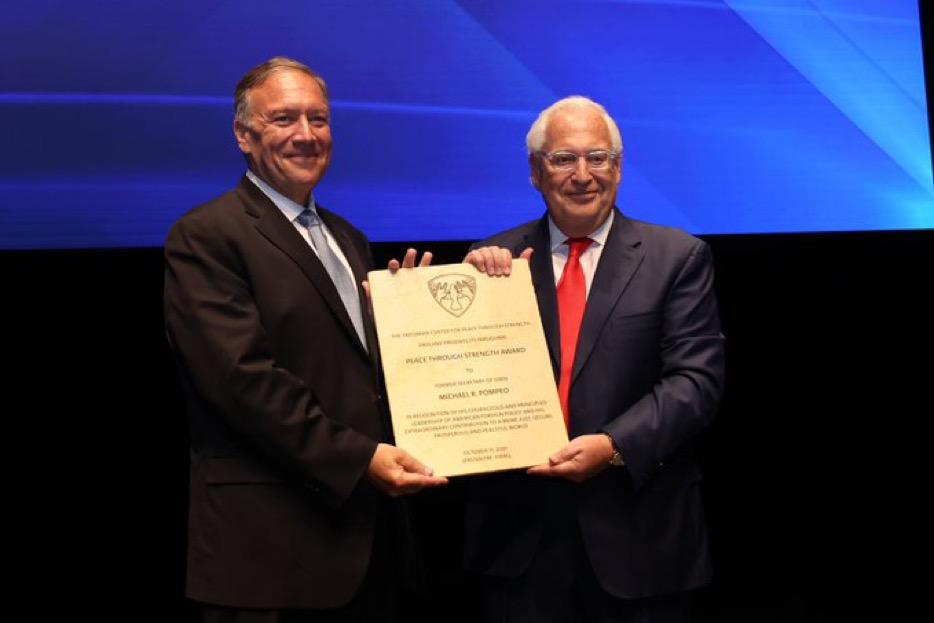 But we also discussed – at length – Friedman’s deep love and passion for the Holy City as a devout modern Orthodox Jewish man, and why he has chosen to blast the Biden administration for planning to open a U.S. Consulate for the Palestinians in West Jerusalem.

In short, Friedman considers the move both “illegal” under U.S. and Israeli law and just “a terrible idea.”

Here are excerpts from our conversation (lightly edited for clarity):

ROSENBERG: Ambassador Friedman, I have to ask you about all the talk within the Biden administration establishing an American consulate for the Palestinians in Jerusalem. Didn't this already get discussed and decided by the American government? Didn’t Congress and the White House already decide that Jerusalem is the capital of Israel. Where are we with this? What's your view?

FORMER AMBASSADOR DAVID FRIEDMAN: Well, look, I think you can unpack it into different categories.

First of all, I think it's completely illegal because the Jerusalem Embassy Act – passed overwhelmingly by Congress in 1995 – makes clear that American foreign policy is that Jerusalem should be an undivided city. And putting a consulate in Jerusalem, which is the undivided capital of the State of Israel, putting a consulate to another people I think would clearly be a division.

[NOTE: “We want the American consulate to constitute the seed of a U.S. embassy in the State of Palestine,” Shtayyeh, said in a Facebook post in September.]

So, I think it's illegal under American law.

Second, it’s also illegal under Israeli law because Israel has declared sovereignty over all of Jerusalem. So, obviously it's Israel's sovereign territory.

In addition to being illegal, I think it's a terrible idea.

By the way, there was never a consulate established for the Palestinian people. There was a consulate established in 1844 by Christian Zionists before the State of Israel, 104 years before the State of Israel came to be. And it existed then because of the significance that the Christian Zionist community placed on Jerusalem. And it kind of morphed after [the] Oslo [Accords] into a mission to the Palestinians. But it just morphed. It wasn't as if there was ever….

FRIEDMAN: It may have been a policy, but it wasn't as if, you know, there was a real determination by the American people to establish a diplomatic mission to the Palestinians in Jerusalem, even less so in Western Jerusalem, which had been controlled by Israel from 1948. So, it was never intended, you know, it was never established for that purpose.

But more importantly, it was never a good idea.

Even before I came into office, I had heard stories of all the prior ambassadors to Israel having real friction with the consulate. Just think about this for a second. The U.S. Ambassador to Israel is appointed by the President and confirmed by the Senate. And he has to then go and meet with the Israeli political leaders, and they're all in Jerusalem. But when he gets to Jerusalem, he finds that that territory is under the American diplomatic control of another entity. That other entity is run by a Consul General who is not appointed by the President. He's appointed by the State Department, and he is not subject to Senate approval. And yet he has this area of responsibility that includes Jerusalem. And he gets to decide where the Ambassador gets to go, or not go. 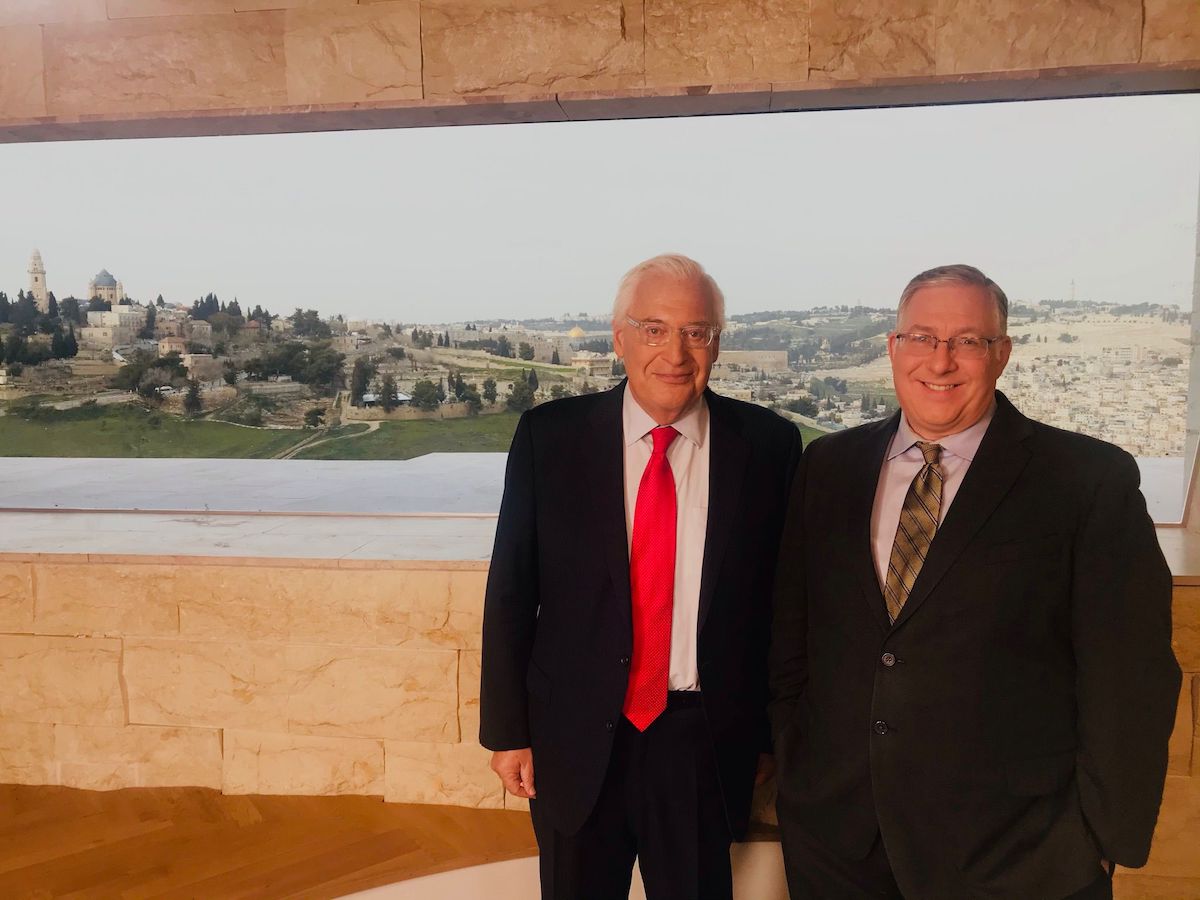 ROSENBERG: It's almost a carved-out fiefdom that has nothing to do with a president's agenda, a Secretary of State’s agenda, or American policy and law.

Just to show you how bad it got when I was there, a couple of days before President Trump arrived in May of 2017, they were setting something as seemingly innocuous as the video feed from the Western Wall, so it could be used to broadcast the president's unprecedented visit to the Western Wall.

ROSENBERG: Trump was the first American president ever to visit the Western Wall, right?

FRIEDMAN: Yes, the first American president ever to do it. And they're setting up the feed and the Shin Bet [the Israeli equivalent of the U.S. FBI and Secret Service], which has the ultimate control of security within the region, the Shin Bet is working on it and gets into some argument with somebody from the consulate. And the guy from the consulate says to the Shin Bet, “You really need to listen to us because, after all, you don’t have the right to be here. This is illegally occupied territory.”

Oh my goodness. And this guy’s comments are reported throughout the day before the President arrived. And this is being reported and I had no control over it because the person who said it didn't work for me. Amazing.

So, these frictions had existed for years. And it wasn't even necessarily a matter of policy. It was just very clumsy.