At the first E.U.-Israel Association Council meeting in a decade, the European Union urged Israel to stop building “settlements” – towns where Jews have permission to live – in Judea and Samaria, and to “preserve the status quo on the Temple Mount” – which means preventing Jews from praying there.

The Council meeting, which took place in Brussels, was held to improve ties between Israel and the E.U and saw the participation of the E.U.’s High Representative for Foreign Affairs and Security Policy Josep Borrell and the foreign ministers of several European countries.

“The E.U. calls on Israel to halt continued settlement expansion, which has reached record highs in the past years, evictions, demolitions and forced transfers,” the E.U. said, with a specific request that Israel not move forward with new construction in the city of Ma’ale Adumim just kilometers east of Jerusalem, and to abstain from evicting illegal Arab villagers in the Masafer Yatta region in the South Hebron Hills. Ma’ale Adumim is a bustling, modern Israeli city, home to about 40,000 people.

The Europeans view the growth of Jewish communities beyond the so-called “green line” in the disputed territories of Judea and Samaria to be an obstacle to the implementation of the two-state solution. However, by rejecting the presence of Jewish civilians in disputed territory once occupied by Jordan, the E.U. seemingly supports an outcome for the area similar to that which occurred in Gaza upon Israel’s extraction from the Strip in 2005 – an absence of Jews.

The E.U. does not recognize the State of Israel’s territorial claims to any part of Judea and Samaria – called “the West Bank” by the Kingdom of Jordan – and “East Jerusalem,” the eastern portions of the Israeli capital that were under Jordanian command between Israel’s War of Independence until the Six-Day War of 1967, including the Old City of Jerusalem and the Temple Mount, itself.

In accordance with the E.U.’s Middle East policies, the European officials used the E.U.-Israel Association Council meeting as a platform to reiterate their backing of “two states” based on the pre-1967 lines, with “East Jerusalem” as the future capital of a Palestinian Arab state. It should be noted that Jerusalem has never been the capital of any nation other than the Jewish people.

Furthermore, the E.U. made clear its position that only Muslims should be allowed to pray on the Temple Mount, the arrangement which the Jordan-appointed Jerusalem Islamic Waqf calls the “status quo.”

“The E.U. … makes a strong call for upholding the status quo put in place in 1967 for the Temple Mount/Haram al-Sharif” and underscores “the necessity to respect the status quo also for the Christian holy sites, which are under increasing pressure,” the E.U. representatives said.

Despite this pressure from the E.U., in his speech, the Israeli prime minister praised the relations with the E.U. and said that the meeting was important for advancing ties between the two parties.

“Over a year ago, when we formed the new government in Israel, I set several foreign policy goals. One of the most important was improving our political and economic ties with the European Union,” Lapid said. He stressed the two parties shared democratic values but warned that these are under the threat of despotic regimes. 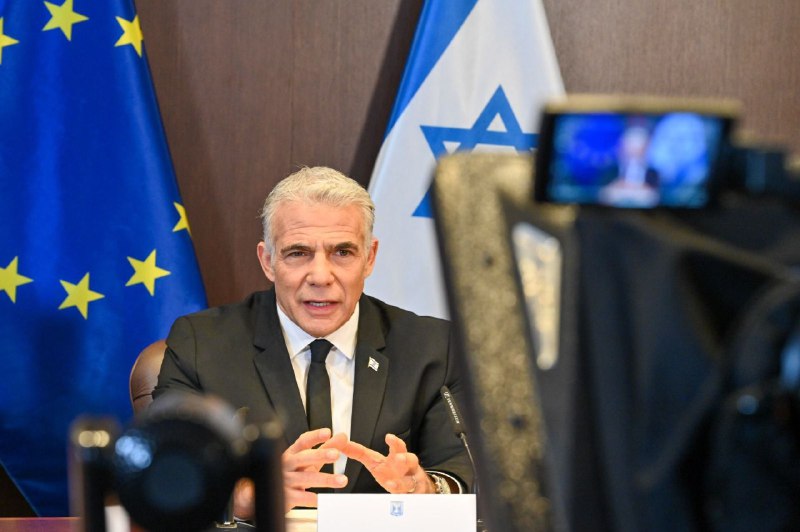 “The E.U. is Israel’s main trading partner, but we share more than just economic interests: We share liberal and democratic values. These values are under attack, and we must stand firm against this attack, together,” Lapid stated.

Turning to the Iranian threat, Lapid tried to present a unified European-Israel front.

“We are all united in our desire to stop Iran from obtaining a nuclear weapon. This is a regime that is murdering its citizens even as we speak. The world must not be silent,” the Israeli premier said.

The European and Israeli officials agreed to continue fighting anti-Semitism, including in the form of the Boycott, Divestment, Sanctions (BDS) movement, and preserving the memory of the Holocaust.