Former Boston Celtics player Enes Kanter Freedom called on the Christian world to come together in “unity, peace and love” during a visit to the Church of the Holy Sepulchre in Jerusalem on Friday.

A Turkish Muslim who has been outspoken about human rights violations in his own country, China and around the world, Kanter Freedom arrived in Israel on Thursday and will stay through Tuesday to help co-host a multi-faith basketball camp in Jerusalem with Tamir Goodman.

On Friday, he took a tour of the four quarters of the Old City and their holiest sites. A tour guide shared information about the area’s religious, historic and archaeological background. On Sunday morning, he ascended the Temple Mount. 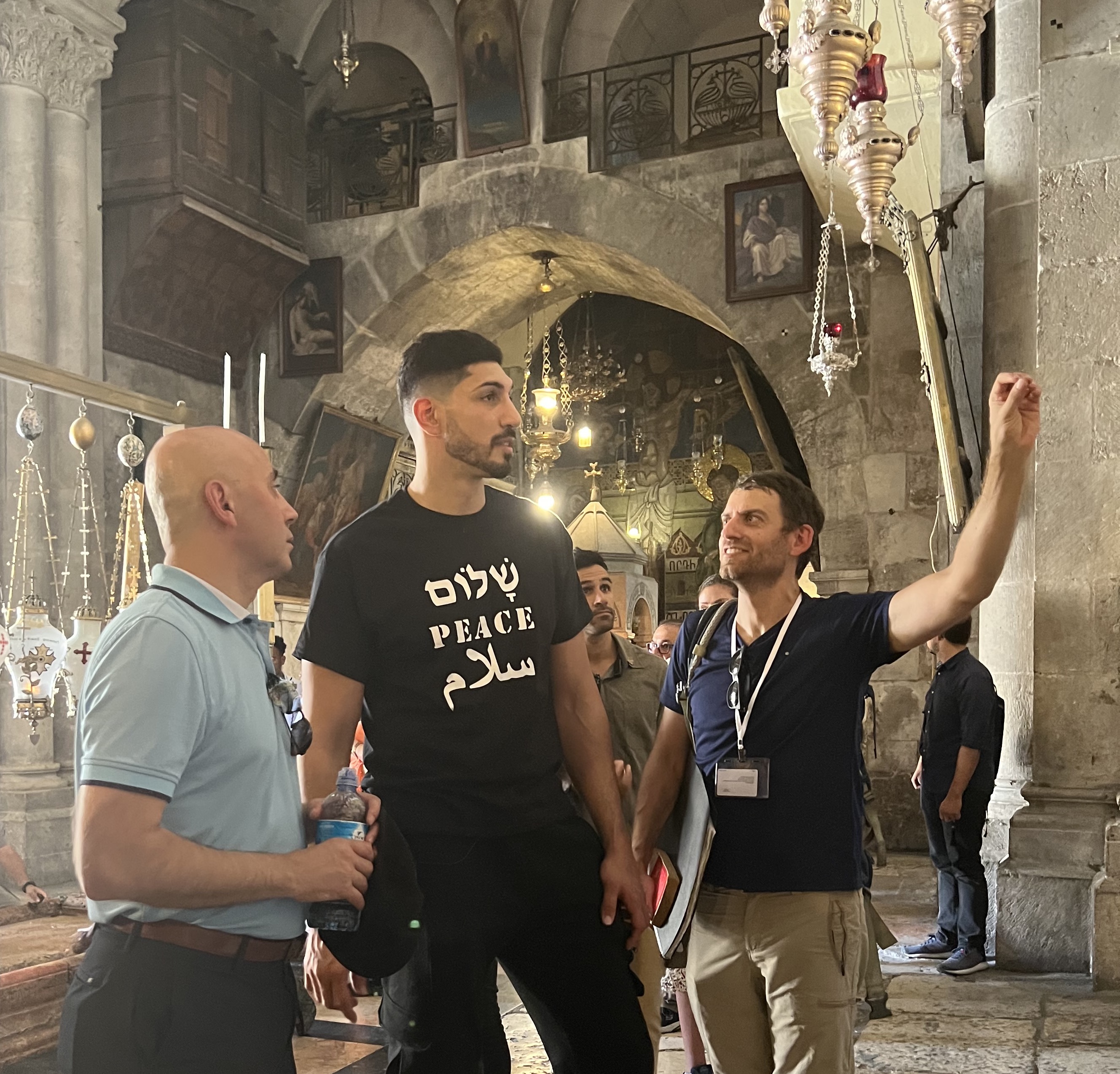 “I am here in Jerusalem, probably the holiest place in the world for Christians,” Kanter Freedom said from inside the Church of the Holy Sepulchre. “This is the place where many people believe that Jesus was crucified, buried and resurrected.

“I have one message for all of my Christian brothers and sisters around the world: Unity, peace and love are the keys. Let’s respect each other,” Kanter Freedom said.

The Holy Sepulchre is divided among six traditional Christian denominations which each run their own section of the church. While many revere the site as containing the tomb of Jesus, most Protestants and other Evangelical denominations believe the site is elsewhere – many holding that the nearby Garden Tomb outside the Old City walls is more likely to be the actual site.

Nevertheless, the church is the anchor of the Christian Quarter and a top attraction to thousands of pilgrims each year.

Several Christian prayer goers stopped the 6-10 (2.08-meter) basketball player to ask for a selfie and tell him how much they respect him or appreciate his efforts. 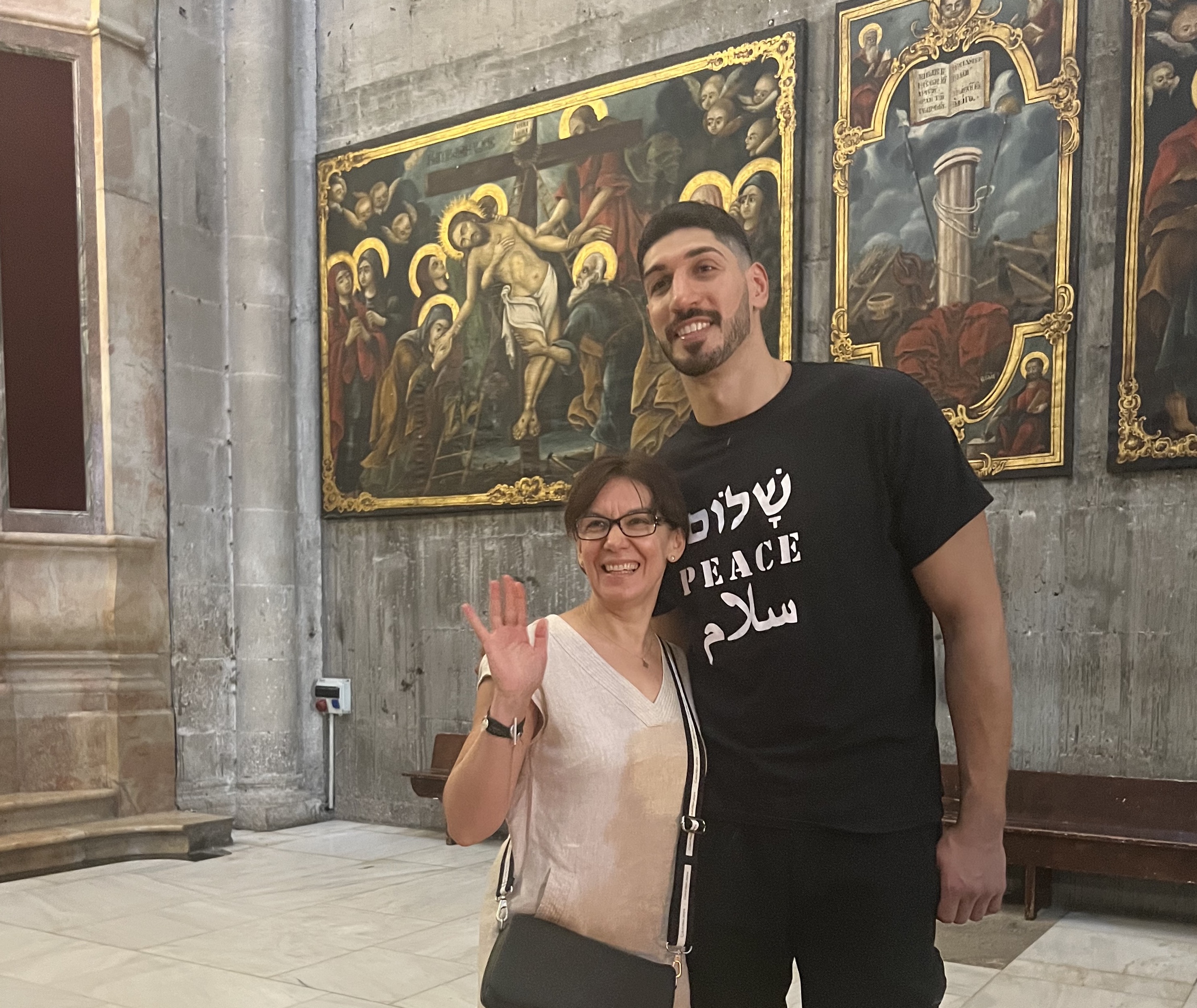 A tourist asks for a photo of Enes Kanter Freedom inside the Church of the Holy Sepulchre (Photo: Maayan Hoffman)

“Shalom, salaam and thank you,” said an older gentleman, who reached out his hand for Kanter Freedom to shake.

As he made his way through the church, Kanter Freedom stopped in the Armenian Chapel.

Armenia was the first nation in the world to declare Christianity its national religion, even before the Roman empire. As such, they have a presence in Jerusalem and their own chapel in the famous church.

The Turks and Armenians have a tragic past that includes the Armenian Genocide – the systematic killing and deportation of Armenians by the Turks of the Ottoman Empire during World War I. Some 1.5 million Armenians were murdered by the Turks between 1915 and 1920.

Turkey has never officially admitted to or recognized the genocide, and there are virtually no diplomatic relations between the two countries. Last year, Kanter Freedom tweeted about the "pain of millions of Armenians" and said, "Turkey must face its past and present crimes."

Kanter Freedom told ALL ISRAEL NEWS that one of his best friends growing up was Armenian and “he taught me so many different and beautiful things. I do respect my Armenian brothers and sisters around the world and my one message to them is let’s keep fighting for the good.”

He said it was “more emotional” being in the Armenian chapel knowing the history between his country and Armenia.

At the request of one of my editors at @all_israel_news, I tweet a video of @EnesFreedom in the Armenian Chapel at the Church of the Holy Sepulchre. Freedom is from Turkey, which has no diplomatic relations with neighboring Armenia. But he tells Armenians, “I love you guys.” pic.twitter.com/gJe2nMZNVb

“I am Turkish, and you are Armenian, and we have to try to find common ground,” Kanter Freedom said in a quick video he made while standing in the center of the Armenian chapel. “I love you guys. I think the most important thing is to put our differences on the table and we have to find what we have in common.”

He told ALL ISRAEL NEWS that he has made new Armenian friends in America, and despite their history, “all I have is respect for them.”

“We need to love each other,” he said.

Jewish, Christian, Muslim and Druze children are taking part in the unity camp. They are learning basic basketball skills, taking part in strengthening and conditioning drills, and discussing faith-driven values.

The camp is underwritten by Bnai Zion, Athletes for Israel and Together Vouch for Each Other U.S.