Day 10 had been one of the quietest days for Israel since the conflagration began.

That was until around 2 p.m. when a non-stop barrage of rockets was launched at Israel over the next two hours – culminating in four rockets launched from Lebanon in the North.

The Israel Defense Forces confirmed: four rockets were shot from Lebanon at 4 p.m. – one was shot down, one landed in an open space and two landed in the sea.

Sirens were heard even as far north as the Galilee and Akko, though it was uncertain whether they were triggered by rockets from Lebanon and Syria or Gaza.

In response, Netanyahu said it is the natural right of Israel to defend itself.

But he added: "I am determined to continue this operation until its objective is achieved: to restore quiet and security to you, citizens of Israel."

Prior to the renewal of incessant rocket attacks, the IDF said groups in Gaza launched an average of four rockets per hour – down significantly from a high of 22 rockets an hour on average on Sunday.

Rocket fire continued into the evening.

Hamas' rockets cannot be aimed precisely at targets, but they can be deadly: 12 Israelis have been killed and 1,800 wounded. Hundreds of buildings have been damaged. The IDF reports a total of 3,775 rockets have been fired from Gaza at Israel, approximately 550 of these landed in Gaza. The Iron Dome has an intercept rate of approximately 90%.

According to the United Nations, 236 Palestinians have been killed including 61 children and 33 military leaders.

Israel's Government Press Office (GPO) said it is impossible to know whether this was true.

"Hamas has a long history of misrepresenting and even faking facts. In previous conflicts, it provided civilian casualty figures that were later proven to include large numbers of terrorists and other combatants. It presents civilians who were used as human shields as victims of Israeli aggression," the GPO said in a fact sheet sent to journalists today. "Similarly, the deaths of Palestinians killed by rockets that failed inflight (it is estimated that approximately 20-30% of the rockets launched at Israel land in Gaza instead) are blamed on Israel."

One of the Israeli military's main goals has been to eliminate senior Hamas commanders including the elusive Mohammed Deif. Apparently the IDF made two attempts to assassinate Deif since the current round of fighting began. Deif stirred the pot two weeks ago when he warned Israel against evicting Palestinians from a property in East Jerusalem's Sheikh Jarrah neighborhood. Military sources said that he got away at the last minute both times they tried.

Violence around the country, on the borders

Hundreds of Palestinians stormed the streets of Nablus, Bethlehem, Hebron, Ramallah and other towns, clashing with police, burning tires and hurling stones and Molotov cocktails at Israelis. Four Palestinian were killed and more than 200 injured on Tuesday.

A UNIFIL spokesman based in southern Lebanon said they were trying to control the situation on the south border.

"I presented today the truth of Israel against Hamas terrorists and made it clear: If democracies around the world attack us instead of Hamas, they will act foolishly and irresponsibly to endanger them and reward terrorism."

"We didn't seek this conflict," he said, referring to the cancellation of Palestinian elections as cause for Hamas seeking escalation.

Netanyahu encouraged foreign diplomats to "support Israel strongly because this is not merely a question of Israel's security, it's a question of our common security."

How we got to this point? 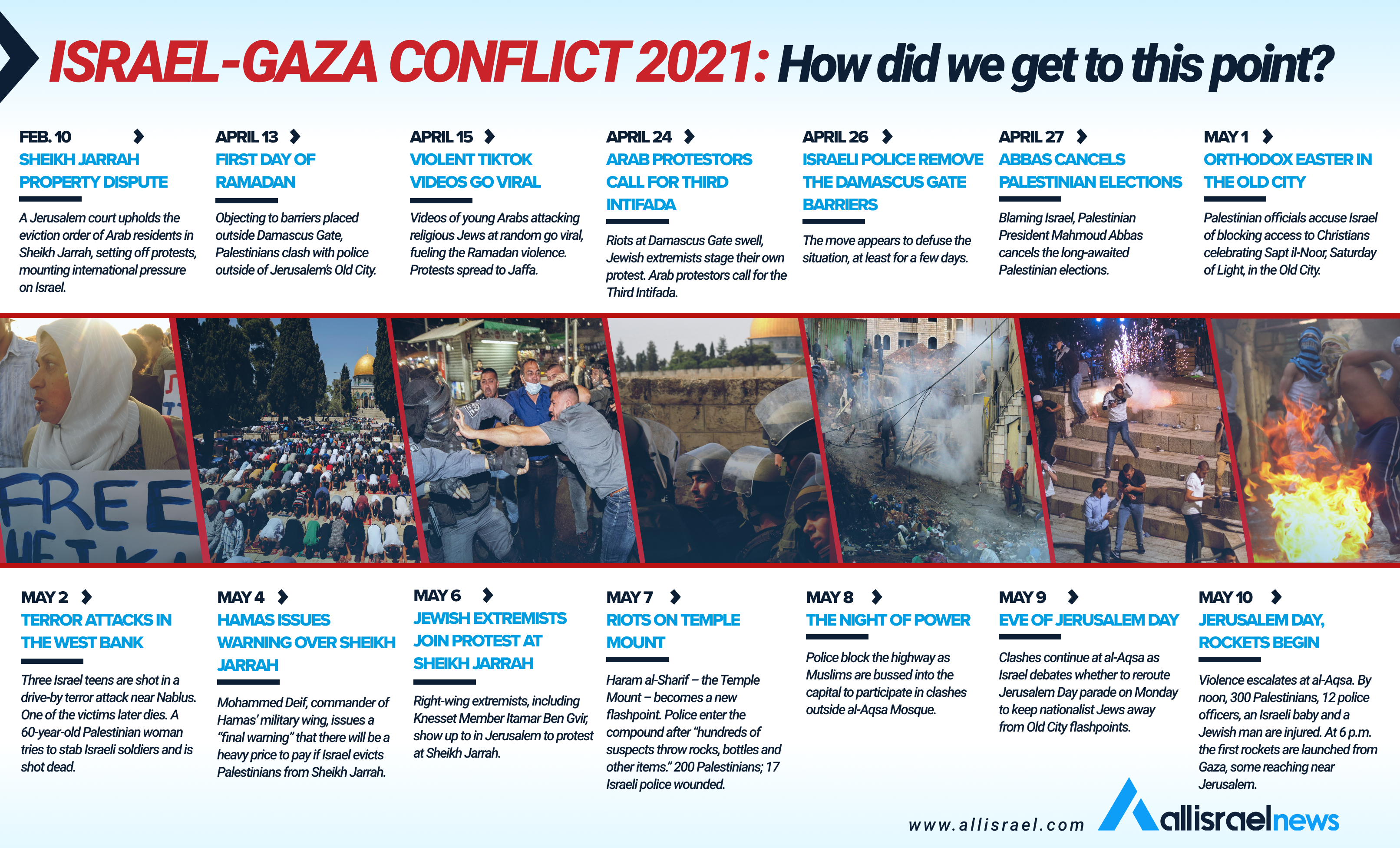 This timeline shows the building up of tensions over the past few months that led to the Israel-Gaza conflict we see today. Click to enlarge. (Graphic by Liah Lavie)

In April, well before the current war began on May 10, Hamas sporadically fired 40 rockets at Israel throughout the month. The GPO statement blamed the incitement on Hamas and the PA.

"The Palestinian Authority is trying to divert attention away from its own decision to postpone elections, thereby deflecting any potential criticism. Hamas is attempting to strengthen its position, both in eyes of the Palestinian population and the Muslim world, by igniting violence and unrest, all the while trying to claim the role of Jerusalem’s defender," the GPO said.

"Hamas instigated this conflict with no concern for civilian life on either side of the border and with the expectation that it can exploit Palestinian suffering to delegitimize the State of Israel. Suffering on both sides will most quickly be alleviated by focusing the blame on those responsible for starting and perpetuating the violence while denying Hamas its objectives."

Energy Minister Yuval Steinitz said the IDF should temporarily take over Gaza for a few weeks in order to disarm Hamas.

"No one will disarm Hamas unless we do it by force," Steinitz told Ynet. "This idea of taking over Gaza to completely dismantle terrorist organizations has heavy costs. That is why I understand the people who think differently from me and who object to the idea of one day doing a ground invasion and the collapse of the Hamas regime."

Meanwhile, the U.S. Embassy in Israel is rolling back its already limited services in light of the security situation.