As the world begins to re-engage Iran in nuclear talks, leaders must consider the genocidal rhetoric coming out of the Iranian regime and take it seriously – or pay the price.

Joel C. Rosenberg, founder and editor-in-chief of ALL ISRAEL NEWS, issued this warning during a Q&A session on his book, “Enemies and Allies: An Unforgettable Journey inside the Fast-Moving and Immensely Turbulent Modern Middle East,” at the Reagan Library on Nov. 30.

“Rhetoric from genocidal leaders can lead to terrible places and, if you assume it’s just for public consumption, they’re just trying to rile up the masses, that’s a mistake,” Rozenberg said, noting historic examples. “And it’s a mistake that (Winston) Churchill understood, and (Neville) Chamberlain didn’t.”

“Evil people lie when they're trying to obfuscate their evil, but if you look at actual writings and speeches, more often than not, evil leaders are very open … about what they want,” Rosenberg said. “Adolf Hitler may have lied to Chamberlain, but he had written 'Mein Kampf.' It didn’t take rocket science to understand what his objectives were.”

And now nations seem to base negotiations on the belief that the Iranian regime is actively seeking a “pathway back onto the highway of international community and fellowship among nations,” Rosenberg said.

Rosenberg focused on the Iranian threat and several other issues pertinent to the Middle East.

“I'm all for pursuing diplomacy because it beats war, but I think you really have to be looking at the nature of the regime: What do they say? What do they do? Is there any evidence that the Iranian regime wants peace, wants to give up a nuclear program? And I would argue the answer is there is very little evidence.”

Known as the Joint Comprehensive Plan of Action (JCPOA), the original agreement was brokered in 2015 by former U.S. President Barack Obama with Joe Biden as vice-president. President Donald Trump had a vastly different approach to Iran. First, he pulled the United States out of the JCPOA in 2018. Then he began a campaign of maximum sanctions on the regime essentially crippling Iran’s economy.

Biden has been eager for the U.S. to reenter the deal, leading to renewed talks last week in Vienna, Austria.

Rosenberg said we can learn the intentions of the regime if we look at the theology, politics, writings and speeches of Iran’s leaders, especially the Supreme Leader.

“It only really matters what he thinks. He’s the driver of the ‘Let's eliminate Israel, annihilate Israel off the map and bring down the Great Satan.’ Is that just rhetoric?

“Nobody in our part of the world where I live, in Israel, can take that type of rhetoric casually,” Rosenberg continued. “I believe that Iran wants nuclear weapons. I believe they’re willing to give up almost any other luxury to get those nuclear weapons because they believe that they won’t be stopped.”

“They don’t believe the Trump administration was going to stop them. They don’t believe the Biden administration is going to stop them. And they’re pretty sure that the American leadership – whoever they are at the time – will prevent Israel from stopping them. And therefore, I think they believe that they’ve got a clear path and they’re just looking for the moment.”

Rosenberg spoke about his book – the only one that tells the inside story of how the Abraham Accords, the historic peace agreements between Israel and the United Arab Emirates, Bahrain, Morocco and Sudan, came about.

“Basically Trump – with no national security experience whatsoever, no foreign policy experience whatsoever – said, ‘Why do we think that pursuing peace talks with the Palestinians or any other Arab country, the way it’s been done for the last quarter century, is going to create a different result? I don’t see it in business. I don’t see it in life. Why would we go down that road? Maybe we should throw out the playbook and do the exact opposite,’” Rosenberg said.

Trump took the advice of his closest confidantes and instead strengthened America’s relationship with Israel by selling Israel more weapons and moving the embassy to Jerusalem, among other actions, essentially sending a message to the Arab world: We are never breaking with Israel.

He simultaneously reached out to the Arab world and engaged states from Saudi Arabia to the Gulf states.

Trump’s approach was “the exact opposite” of conventional and traditional wisdom in American politics. He and his team assessed accurately a fundamental change in the region.

“They could see things that the other side had locked into a certain set of paradigms that they couldn’t get out of,” Rosenberg said, whereas players on the “other side” never reassessed their long-held assumptions. “The Trump team did. Trump insisted that they do it, and they were right – and they should have won a Nobel Peace Prize for it.” 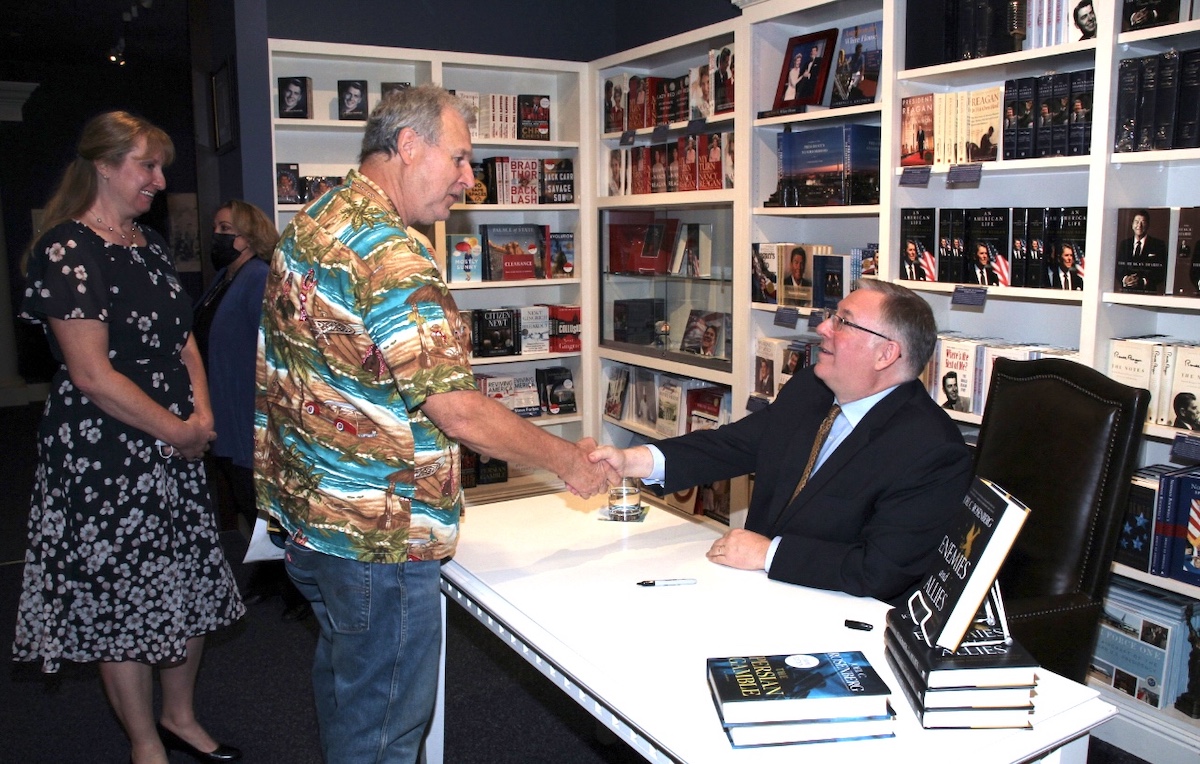 Joel C. Rosenberg at a book signing at the Reagan Library (Photo: ALL ISRAEL NEWS)

The Abraham Accords has stood foreign policy on its head and has caused a shift in international relations.

For example, Saudi Arabia’s Crown Prince Mohammed Bin Salman (MBS) “is going in the right direction … on a vast majority of domestic issues.”

"He is taking Saudi Arabia into a new world. It's the world we want. So how do you not work with them? It's a very difficult situation, and it's way above my pay grade,” Rosenberg said.

On the other hand, you have Turkish President Recep Tayyip Erdoğan, who both the Biden administration and NATO are working with despite his hardline policies and Islamization of his nation.

“Turkey is going to the dark side,” Rosenberg said, yet “there’s no talk of not working with Erdogan. Why not? Why isn’t he being kicked out of NATO? He’s buying weapons systems from the Russians.”

Then there is Russian President Vladimir Putin who Rosenberg said operates either as a czar or a mafia boss.

“He’s an authoritarian dictator, and everybody ought to bow down to him because he’s God’s man. And I think that’s a fair way to read the way he acts,” Rosenberg said.

“But there’s another way and that is the godfather scenario: he’s really a mafia boss at his heart and he’s trying to amass power and he’s trying to amass wealth,” Rosenberg continued. “But he does have nuclear weapons and he does have a world unwilling to confront him. So he plays those cards, and right now we're on the verge of a possible Russian invasion of Ukraine.”

The Ronald Reagan Presidential Foundation and Institute, located in Simi Valley, CA, is a nonprofit, non-partisan organization dedicated to preserving the legacy of the 40th U.S. president, Ronald Reagan.