JERUSALEM— Israel’s new government, sworn in Thursday, is a complex and confusing contradiction.

On the one hand, Prime Minister Benjamin “Bibi” Netanyahu has built a coalition of center-right, far-right, and extreme right-wing political parties.

Many of these parties are filled with – and led by – fundamentalist Orthodox and even ultra-Orthodox religious Jews.

On the other hand, Netanyahu wants most Israelis – and the rest of the free world – to see him as a center-right leader, not an extremist, protective of the rights of religious and ideological minorities in Israel.

But from Day 1 of re-taking power, two of his strongest supporters are on a collision course.

Netanyahu recommended Amir Ohana to be speaker of the Knesset, Israel’s parliament.

The Knesset overwhelmingly accepted Netanyahu’s suggestion and elected Ohana to that high-profile role.

So, who is Amir Ohana?

At 46, this former Shin Bet officer is an openly-homosexual politician.

He and his partner live together in Tel Aviv and are parents of two adopted children.

He is also a member of Netanyahu’s Likud Party and a loyal ally to Bibi.

In 2019, Bibi appointed Ohana as minister of Justice, making him the first openly-gay Cabinet member in Israeli history.

The following year, in a political reshuffle, Bibi appointed Ohana to serve as minister of Public Security. 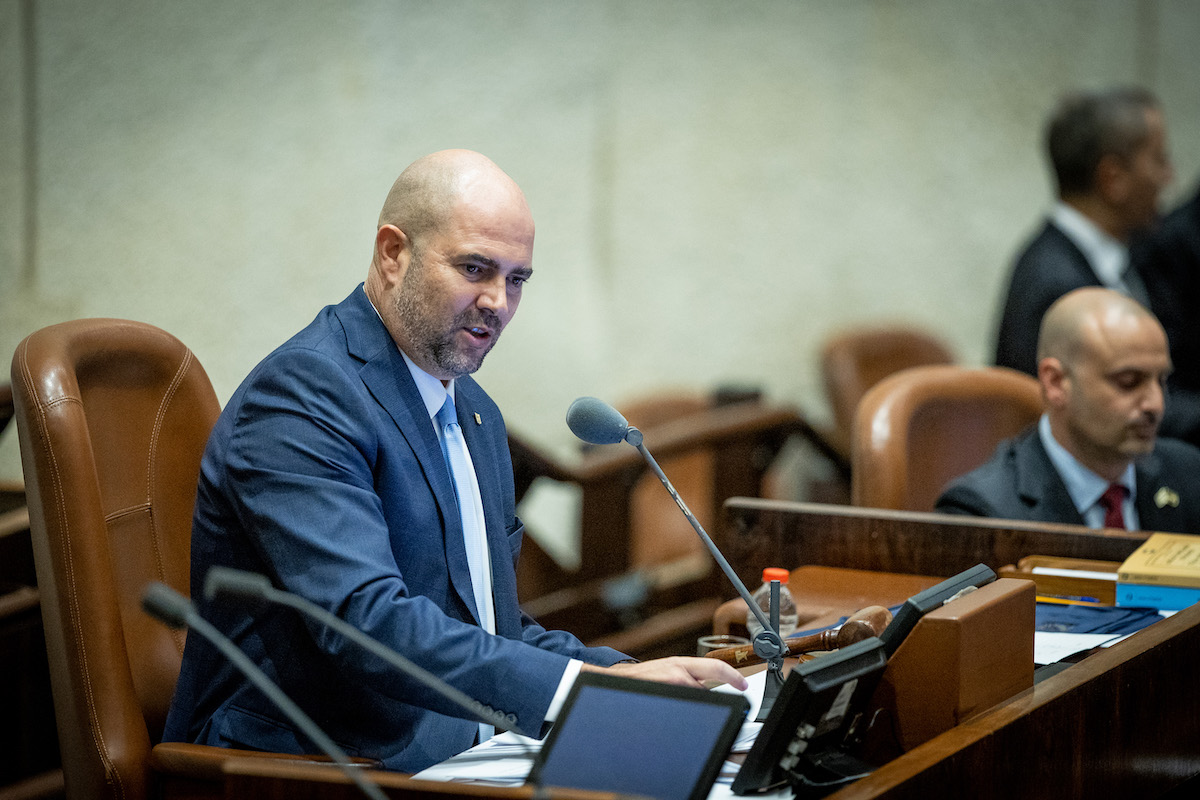 Knesset speaker Amir Ohana at the swearing-in ceremony of the new Israeli government at the Knesset in Jerusalem, Dec. 29, 2022. (Photo: Yonatan Sindel/Flash90)

At the very same time, Netanyahu appointed a legislator named Avi Maoz to serve as one of his deputy prime ministers.

So, who is Avi Maoz?

At 66, he is the leader of the Noam party, which ran together with highly controversial far-right politicians Itamar Ben Gvir and Bezalel Smotrich.

Highly religious and trained in a yeshiva, he is married, has ten children and many grandchildren, and lives in Jerusalem, in the City of David.

Maoz will be in charge of the absorption of Jewish immigrants from the former Soviet Union and promoting a stronger national Jewish identity at home and abroad. 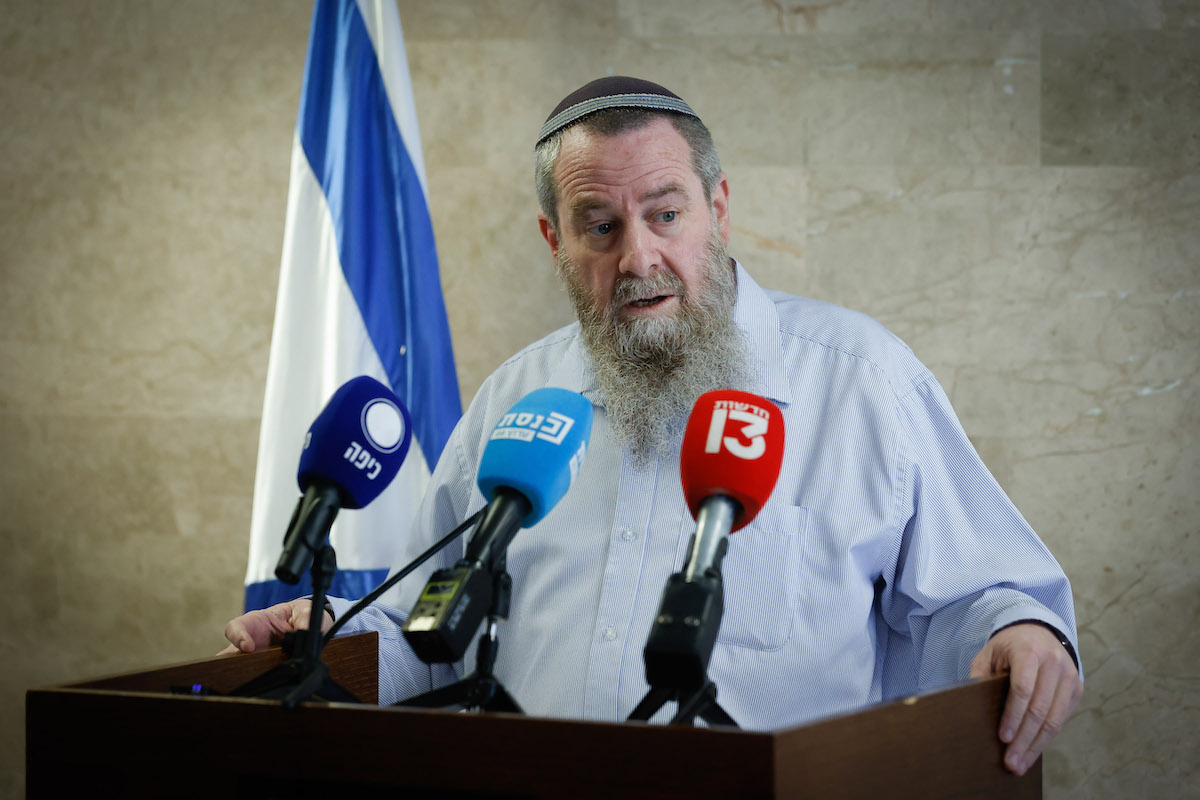 Yet Maoz is highly controversial in Israel.

Because he and his supporters believe that true marriage is between one man and one woman.

In early 2022, they launched their election campaign by marching in Jerusalem with a banner that read, “A father and a mother = a family. The courage to be normal.”

This view, of course, is a basic tenet the Hebrew Bible. In Genesis, the very first book of the Torah, Moses explains that God created the universe, created earth and everything within it, created men and women, and created the institution of marriage to serve as a blessing between a man and a woman, the only way to “be fruitful and multiply” and fill the earth with children, another blessing from God.

But this view is not well received in Israel.

To the contrary, as I wrote about in a column back in June, most Israelis pride themselves on being pro-gay rights and even supporting large annual gay rights “Pride” parades in Tel Aviv and Jerusalem.

Holding a Biblical worldview of marriage is considered an angry and intolerant position by many, particularly in the Israeli media.

Maoz – who has certainly made his share of incendiary remarks – is routinely attacked in the Israeli media as “anti-gay.”

In one 24-hour period shortly after the recent Israeli elections, when it was becoming clear that Maoz would be part of Netanyahu’s government, The Jerusalem Post reported that there were more than 300 articles about him.

By contrast, the Post reported, there were only about 180 articles about then-Prime Minister Yair Lapid in the same 24-hour period.

Almost all of the Israeli articles (and many international media stories, as well) called Maoz “anti-LGBT” rather than a supporter of the traditional, biblical view of marriage.

Here is one example from the Times of Israel: “A former leader of the movement to bring Soviet Jews to Israel, Maoz now advocates tightening eligibility requirements to be closer to the Orthodox definition of Jewishness. His Noam party campaigned its way to the Knesset on a slew of anti-LGBT, anti-Jewish pluralist and misogynistic stances.”

I’ll be honest, I haven’t met Maoz – and until this week he was such a minor figure in the country, I didn’t pay close attention.

So, I don’t have a good read yet on whether he speaks in a friendly, respectful way about those with whom he disagrees on biblical and political issues.

Is he truly angry and bitter towards the LGBTQ community?

Or is he simply trashed for holding traditional views?

We’ll definitely be reporting more on this in 2023.

HOW WILL NETANYAHU MANAGE THIS TENSION?

For now, it’s hard not to see Ohana and Maoz – both members of the same governing coalition – as on a collision course.

This is not a “problem” that can be solved.

It is a “tension” that will have to be carefully managed.

How will Netanyahu do it?

At the moment, I have no idea.

But this is Bibi’s sixth government.

He’s been prime minister longer than anyone else in modern Israeli history.

If anyone can manage the tension, it’s Netanyahu.

But it’s certainly not going to be easy.

WHAT DOES BIBI REALLY WANT?

Why, then, did Netanyahu invite this tension in the first place?

Why did he urge his fellow Knesset members to make Amir Ohana their speaker, knowing that the appointment would anger his religious allies, and not be seen well in the far more conservative Arab and Muslim world?

First, Netanyahu wants to be able to tell the broader Israeli public that while he does have some highly-controversial religious politicians in his government, “Hey, that’s democracy. That’s who the people elected. And I believe in democracy. But I will be the prime minister of all Israelis, even those who don’t agree with us and didn’t elect us. And we’ve elected the first openly-gay Speaker of the Knesset, proving that we will not be crazy and intolerant and hostile to the rights of minorities in the country.” It won’t blunt the Bibi-haters. But it might buy him some space from center-right voters who have been thrown off balance by the election results and the presence of Ben Gvir and Smotrich in his government.

Second, Netanyahu wants to be able to speak to the American and international media and blunt criticism that he has a bunch of far-right extremists in his government by saying he’s leading a government that reflects democracy and the broad consensus within Israeli society.” It probably won’t work with most of the media, but it might buy Bibi some time inside the Biden White House.

Third, Netanyahu wants to be able to go to the United Nations and say, “The Iranian regime is beating and arresting and hanging gays from lamp poles because they’re an evil regime. Israel, on the other hand, is enlightened and tolerant of gays – just look at the Speaker of our parliament.” Will that work? With some European leaders, perhaps. But Israel haters will just go on hating.

The larger challenge for Netanyahu and for Israel as a whole is this:

Thus, Evangelicals who love the Lord, the Bible and Israel, should not get weird or shrill or nasty about the rise of the LGBTQ community or its widespread embrace by most of the Israeli culture and political sphere.

But we must be willing to pray for Israel to read the Bible from cover to cover and truly embrace the God of the Bible – and to speak the truth in love about the importance of biblical marriage between a man and a woman and the spiritual, physical and social risks that come to any society that decides to do what is right in its own eyes.