JERUSALEM—David Friedman never expected to be a high-profile American diplomat in the Middle East, much less part of a White House inner circle.

He was trained, after all, as a bankruptcy lawyer, and that’s how he met Donald J. Trump who hired Friedman to help him craft deals that would make him billions of dollars, not go into bankruptcy.

Yet when Trump was elected president of the United States in November 2016, he turned to Friedman, his long-time friend and business consigliere, and asked him to serve as the U.S. ambassador to Israel.

On the last day of our “Abraham Accords Delegation of Evangelical Business & Media Leaders,” Friedman met with us at the Hilton Hotel in Tel Aviv and shared with us his remarkable story of building a friendship with Trump and going on to serve on the frontlines of the most dramatic years of Middle East peacemaking in modern history.

TAKING US BEHIND THE SCENES

After I gave him a copy of my recent book, “Enemies and Allies: An Unforgettable Journey inside the Fast-Moving & Immensely Turbulent Modern Middle East,” he graciously gave me a copy of his, “Sledgehammer: How Breaking with the Past Brought Peace to the Middle East.” 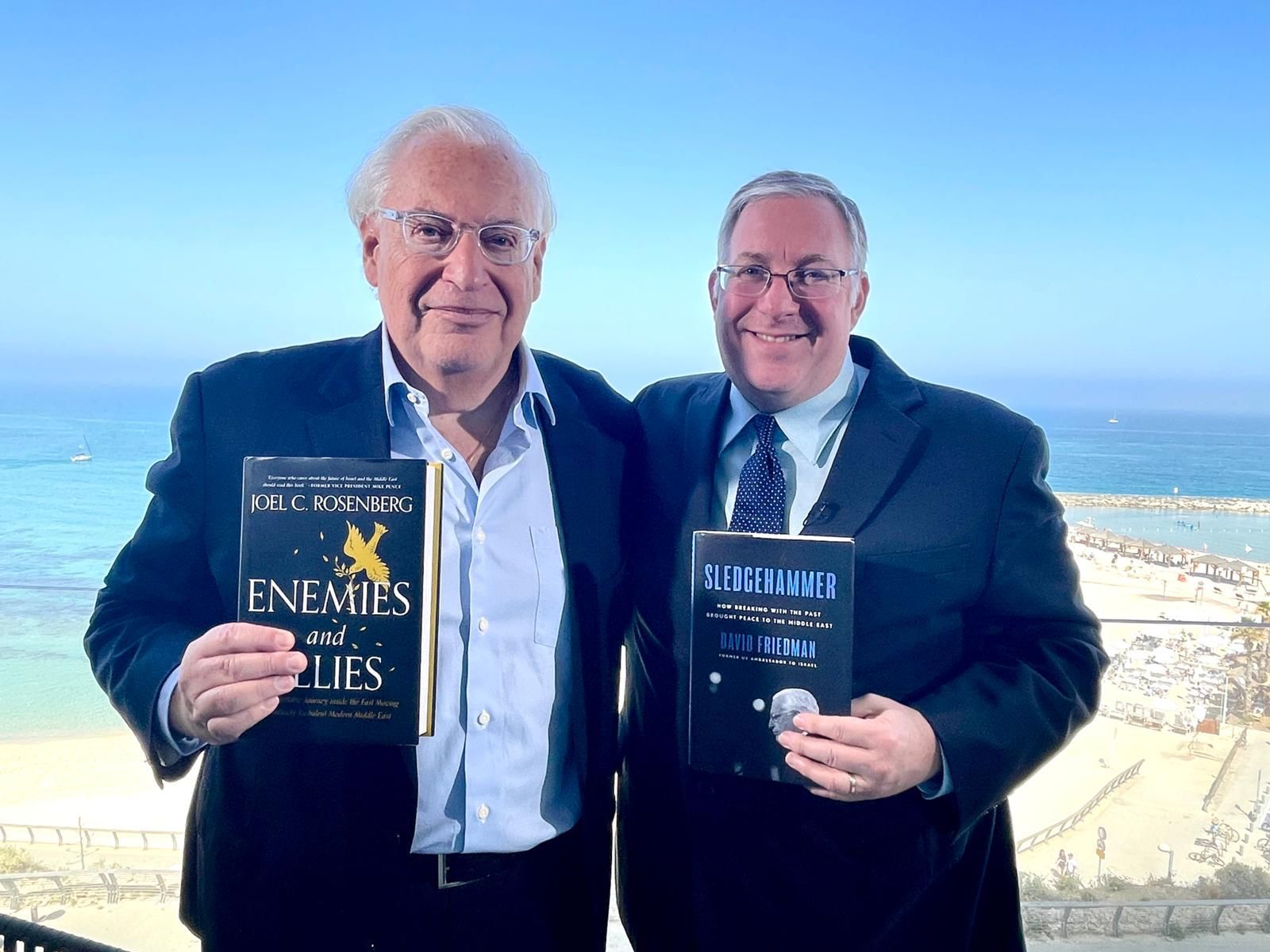 As it happens, these are the only two books published in English the tell the inside story of the Abraham Accords and the tectonic changes that are underway in the Arab and Muslim world, concurrent with the existential threat from Iran.

Drawing from his book, Friedman took the group behind the scenes into the internecine warfare inside the Trump White House over whether to move the U.S. Embassy from Tel Aviv to Jerusalem or not.

He shared with us the inside story of the failed effort to broker a final peace deal between Israelis and Palestinians.

But he also shared with us his vantage point on the extraordinary story of how the Trump team successfully brokered four Arab-Israeli peace and normalization agreements that became known as the Abraham Accords, something almost no Mideast experts in Washington thought was even remotely possible.

GOING ON THE RECORD ON IRAN AND TEMPLE MOUNT VIOLENCE

After the hour-long discussion, I sat down to Friedman on the balcony of our meeting room, overlooking the glistening Mediterranean, to ask about to hot topics in the news.

The recent explosion of violence and tension on the Temple Mount.

And the possibility of an imminent new nuclear deal between the Biden administration and the Iranian regime.

He does not trust the Biden team to broker a serious and effective nuclear deal with Tehran, though he would certainly love it if they did.

Friedman worries, however, that Biden is prepared to take almost any deal with Iran and will then lift all or most of the economic sanctions that had brought Tehran to its metaphorical knees.

This, he said, would be a disaster. 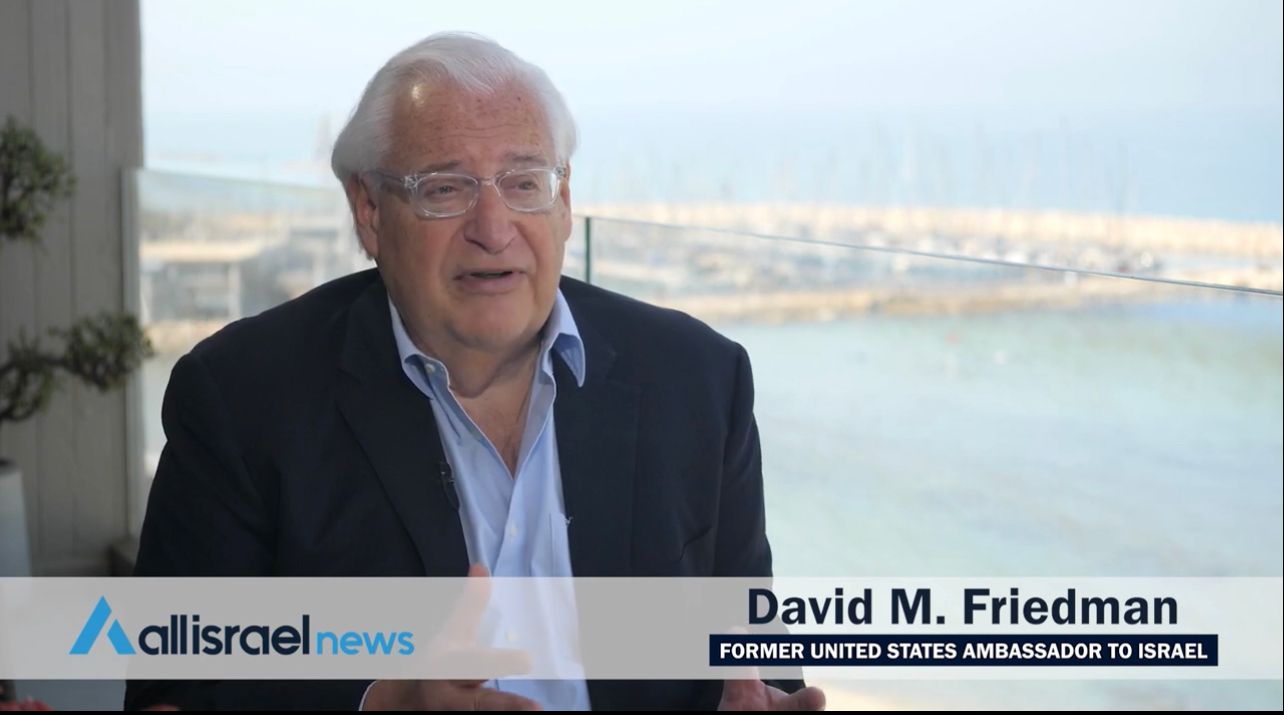 “I want them to have to choose between bankruptcy and a nuclear weapon,” Friedman told me. “I think that's the only basis upon which they might eschew a nuclear weapon. And we [the United States government] can still do that because we haven't released the funds yet.”

“Once we release those funds, they're not going to use the money to build schools and hospitals,” he argued. “They're going to use it to double down on ballistic missiles, to foment terror from Yemen to Syria, Iraq, Lebanon, Hamas.”

“I mean, these are the last people in the world you want to give money to.”

Here is the transcript of the on-the-record portion of our conversation, lightly edited for clarity.

ROSENBERG: Ambassador Friedman, great to see you – although I always feel like I should only meet with you in Jerusalem. But it's a beautiful day in Tel Aviv. Thank you for talking to ALL ISRAEL NEWS.

AMB. DAVID FRIEDMAN: Thank you, Joel. It's great to be with you. And I also like to be in Jerusalem. But I just happen to be today in Tel Aviv.

ROSENBERG: I appreciate it. Listen, Jerusalem has been an explosion in recent weeks and there's the violence, but there's also the ripple effects of pretty strong condemnations from the United Arab Emirates, from Jordan, even from Egypt, a little less from Bahrain. Tell us what you think the situation is. And connect it to the Abraham Accords. Why are we seeing pushback that feels stronger than last year when there was 4,000 rockets and violence and Sheikh Jarrah. Why is this night different from all other nights?

FRIEDMAN: Well, look, religious conflicts are always the most serious conflicts in the Middle East, so everybody wants to avoid a religious conflict. The reality, of course, that there is no religious conflict and there never has been a religious conflict. And the notion that al-Aqsa is under attack is just a lie. And it was never under attack. It hasn't been under attack, certainly not by Israel or the Jewish people in its history. But if you go back to 1929, go back that far, the Hebron massacre in Hebron, why did it start? Because of a rumor, a narrative that al-Aqsa was under attack wasn't true then. But people died. Any time Hamas wants to foment unrest, they go for the al-Aqsa under attack card. Now, the media will show pictures of people throwing stones and smoke and everything. It's a tiny fraction of the time spent by Muslim worshipers during the month of Ramadan at al-Aqsa. Tiny fraction. I mean, there are all kinds of beautiful pictures of Muslim families having picnics there, having iftar.

ROSENBERG: Are there hundreds of thousands of people having the freedom of worship?

FRIEDMAN: And there's no nation in the history of the Temple Mount and the al-Aqsa Mosque and the Dome of the Rock. No nation that has done more to preserve and protect the rights of Muslim worshippers, to pray freely at the third holiest site in Islam than the government of Israel. That doesn't sit well with Israel's enemies, doesn't sit well with Hamas, doesn't sit well even with the PA. And so, you know, during the holy month of Ramadan, when people's emotions are strong, you have this narrative, it'll go away because it's not true. Now, why do people care about it? Because nobody wants violence. Nobody wants to see their street, you know, upset. But it's unfortunate because it's all premised upon a complete lie, a complete lie that al-Aqsa is under attack by the state of Israel. It's never been the case and it wasn't the case this past week.

ROSENBERG: So why have the Emiratis and the Jordanians been much stronger, but particularly the Emiratis, because they're Israel's new peace partners in the Abraham Accords?

FRIEDMAN: I think their goal is to quiet things down. And in the short run, I think everybody would like to see things quieted down. And in fact, the last time I checked, they were pretty quiet. And I would expect that they will continue to de-escalate and de-escalate and go back to normal. So, there was a short-term goal to just deprive the extremists of the gasoline to fuel the fires.

ROSENBERG: In other words, if a peace partner is saying, “Hey, you guys [Israel] are going too far,” at least it wasn't like they [the UAE leaders] were kowtowing to Israel or not paying attention [to a very sensitive issue.]

FRIEDMAN: I didn't see it as anything more than trying to be helpful to achieve a short-term goal of de-escalating violence. But the long-term issue is still that the Muslim world needs to understand – and I hope they come and visit this  holy site – they will see, you know, there is about ten different entrances to the Muslim faithful to enter the Temple Mount. There is only one for non-Muslims. And the non-Muslims have to go through all kinds of security and metal detectors. And there's none of that for the Muslim world. And if you're Jewish or Christian and you enter the Temple Mount, and you start to move your lips in prayer, you are asked to leave. So, with all respect to, you know, all the complaints, the Muslim world really doesn't have a basis to complain. But they have to see it to believe it. And I hope that over time that comes about. 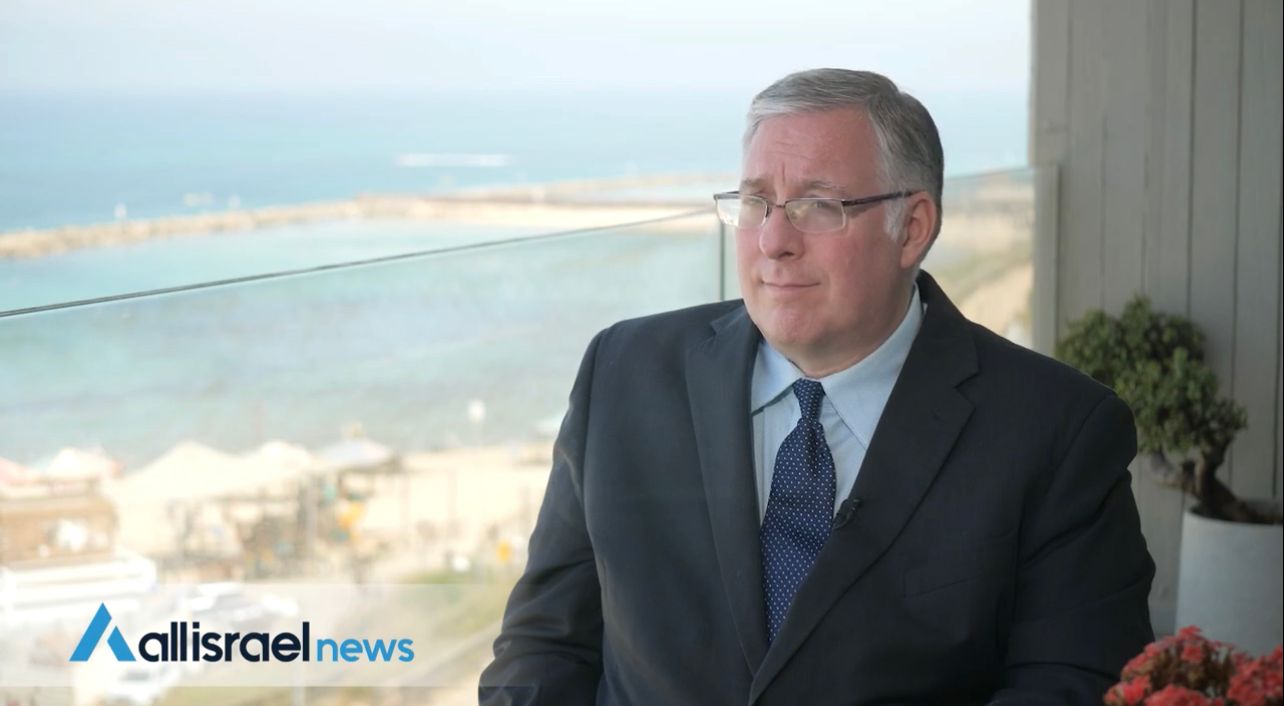 ROSENBERG: One last question – Iran. My perception is we are either headed towards a very, very, very bad nuclear deal, or there's no deal and it's just a very, very, very bad situation in which nobody has an answer on how to neutralize the Iran nuclear threat without creating a whole new war. But you can't let them get a [nuclear] bomb. How do you read the situation right now and how can Christians be praying for peace in a very difficult and delicate situation?

FRIEDMAN: Well, you know, I don't think there ever was a [serious] deal with Iran. I think the old deal was one that had far too many flaws and too many holes. The fact is that you cannot inspect the military sites in the Islamic Republic of Iran, which is the most natural place for them to store a nuclear weapon. So, I don't think it ever was there [a true, serious deal to end Iran’s nuclear weapons ambitions]. At least under the Trump administration, they [Iranian leaders and their economy] were broke. Right? So, if you have an enemy and you cannot get them to join the community of nations in peace, let them at least be broke.

ROSENBERG: You were a bankruptcy lawyer. You want to see them bankrupt if they're not going to change?

FRIEDMAN: I want them to have to choose between bankruptcy and a nuclear weapon. I think that's the only basis upon which they might eschew a nuclear weapon. And we [the United States government] can still do that because we haven't released the funds yet.

Once we release those funds, they're not going to use the money to build schools and hospitals. They're going to use it to double down on ballistic missiles, to foment terror from Yemen to Syria, Iraq, Lebanon, Hamas.

I mean, these are the last people in the world you want to give money to.

Now, how do we solve the problem?

ROSENBERG: Ambassador Friedman, thank you for talking to ALL ISRAEL NEWS. Great to talk to you.

FRIEDMAN: Great to talk with you. Thanks, Joel.