2. McAuliffe lost in a state that Biden had won by 10 points just last year.

3. McAuliffe lost even though he had previously served as governor, from 2014 to 2018, and had once served as the chairman of the Democratic National Committee from 2001 to 2005.

4. Not only did Biden and the Democrats lose the governor’s race, they also lost the lieutenant governor’s race to Winsome Sears, 57, a devout Evangelical Christian and former Marine who is the first African-American Republican ever to be elected to the post.

5. What’s more, Biden and the Democrats lost the race for attorney general to a Republican, as well.

6. If that were not enough, Biden and the Democrats are in danger of losing the governor’s race in New Jersey, as well – with 88% of the vote counted, Democrat Gov. Phil Murphy was barely holding onto a lead over Republican Jack Ciattarelli – 49.7% to 49.6%.

7. What’s stunning about how close the New Jersey race is at the moment is that Biden won the state by 17 points just last year.

The crushing defeat of Biden’s team in Virginia, and the possible defeat of his team in New Jersey, comes at a time when the American people are turning against the president.

Biden’s approval rating has plunged nearly 13 points – from a high of 55.8% in January to just 43% today, according to the Real Clear Politics average of all recent credible polls. 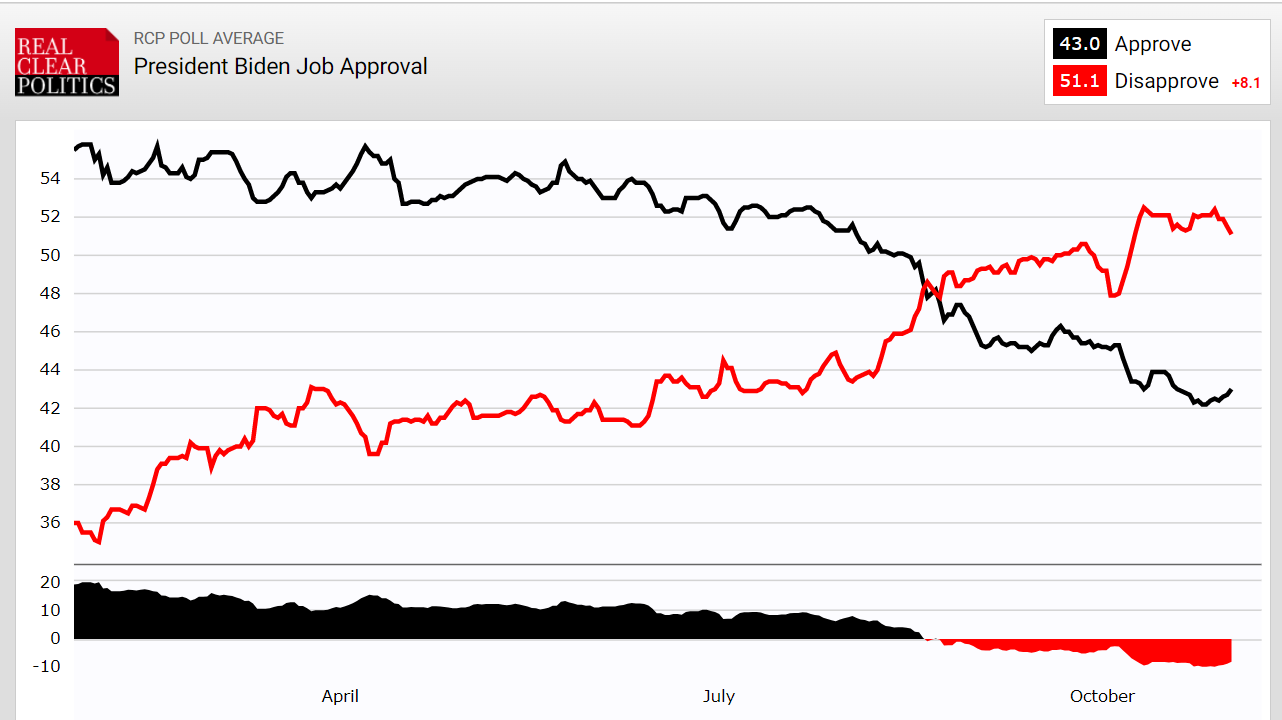 Meanwhile, Biden’s disapproval rating has skyrocketed by 15 points – from a low of only 36% in January to 51.1% today, according to the Real Clear Politics average.

There are a myriad of reasons for Biden’s political collapse, from his surrender to the Taliban in Afghanistan, his support for massive tax hikes and deficit spending, rapidly rising inflation and gas prices, and far-left social policies.

But Republican political leaders eager to retake control of Congress in 2022 and the White House in 2024 are not the only ones watching Biden’s troubles with excitement.

America’s enemies are watching, as well.

Are tyrants in Tehran likely to strike a new “Iran nuclear deal” with an American commander-in-chief who is growing weaker and weaker, week after week?

What about terrorist groups throughout the Middle East?

Are they more likely to test Biden, planning catastrophic attacks against American citizens, interests, installations and allies in the weeks and months ahead?

And what about American enemies outside of the Middle East?

Is it increasingly likely that Russian President Vladimir Putin, as well as the communist regimes in China and North Korea, will look for ways to press their advantage, believing Biden too politically weak at home to respond quickly and decisively abroad?

As America’s enemies smell blood in the water, do Israel’s enemies believe they have an open window to strike the Jewish state with impunity?

These are sobering questions.

Christians need to pray for the enemies of America and Israel to be kept at bay.

But we also need to consider carefully the dangerous global implications of Biden’s domestic implosion.