Four Hamas terrorists were killed and two Israeli soldiers were seriously wounded overnight Saturday in Jenin during an operation by the Israeli security services to arrest members of a Hamas terror cell in the West Bank believed to have been planning terror attacks.

Some media outlets are reporting that five Hamas members were killed in the clashes.

The coordinated raids took place in five separate locations across the West Bank. Israeli intelligence had been tracking a local Hamas terror cell for several days.

“Two IDF personnel, an officer and a soldier, were seriously wounded during the overnight operations in the town of Burqin west of Jenin and have been evacuated to the hospital for treatment. Their families have been notified and the circumstances surrounding their injuries will be investigated,” according to an official IDF statement.

“The security forces took action overnight in Judea and Samaria against Hamas terrorists who were about to carry out terrorist attacks in real-time,” Bennett said.

Bennett – who served in the elite anti-terrorism unit Sayeret Matkal during his time in the army – is known for his hawkish position on terrorism and threats to the Jewish state’s security.

Jenin, which is located in the northern West Bank is considered a hotbed for terrorism due to the Palestinian Authority's very limited control of the city. During the Second Intifada in the early 2000s, Jenin became a major hub for anti-Israel terrorism. Israeli security forces recently captured two Islamic Jihad fugitives in Jenin who had escaped from the high-security Gilboa Prison in northern Israel.

In a statement, the terrorist organization Hamas praised the terrorists, vowing that “the blood of the martyrs of Jerusalem and Jenin at dawn today will continue to fuel our people’s revolution against the Zionist occupier.”

“The death of today’s martyrs is the consequence of ongoing security coordination with the Zionist occupation. It is the fruit of normalization meetings which PA leaders held with Zionist ministers and Knesset members in Ramallah,” al-Qanou said.

But Palestinian Authority President Mahmoud Abbas diverted the blame and called the deaths of four Palestinians “executions” by Israel, warning they are likely to spark more violence.

“These crimes are the continuation of an ongoing series of violations and field executions of our people. Should this policy continue, it will cause the situation to explode,” Abbas’s office said in a statement, according to PA media.

IDF Spokesperson Brig.-Gen. Ran Kohav told the media on Sunday that the army was alert to possible retaliation from Hamas firing rockets from Gaza into Israel.

“This was a Hamas cell, one that we have been following for a long time with intelligence from the Shin Bet. There’s always a chance that there can be rockets, especially since this was a Hamas cell and the group is always trying to connect Gaza to the West Bank,” Kohav said.

Meanwhile, the Israeli military took down a Nazi flag that was raised in the Arab town Beit Ummar close to Hebron in the southern West Bank on Saturday. The Nazi flag was reportedly hung on electrical lines close to an Israeli military post in the area. Approximately a month ago, Palestinian rioters placed a flaming wooden Star of David with a swastika inside it close to the Arab town, Beita, and adjacent to the evacuated Jewish West Bank outpost, Evyatar. 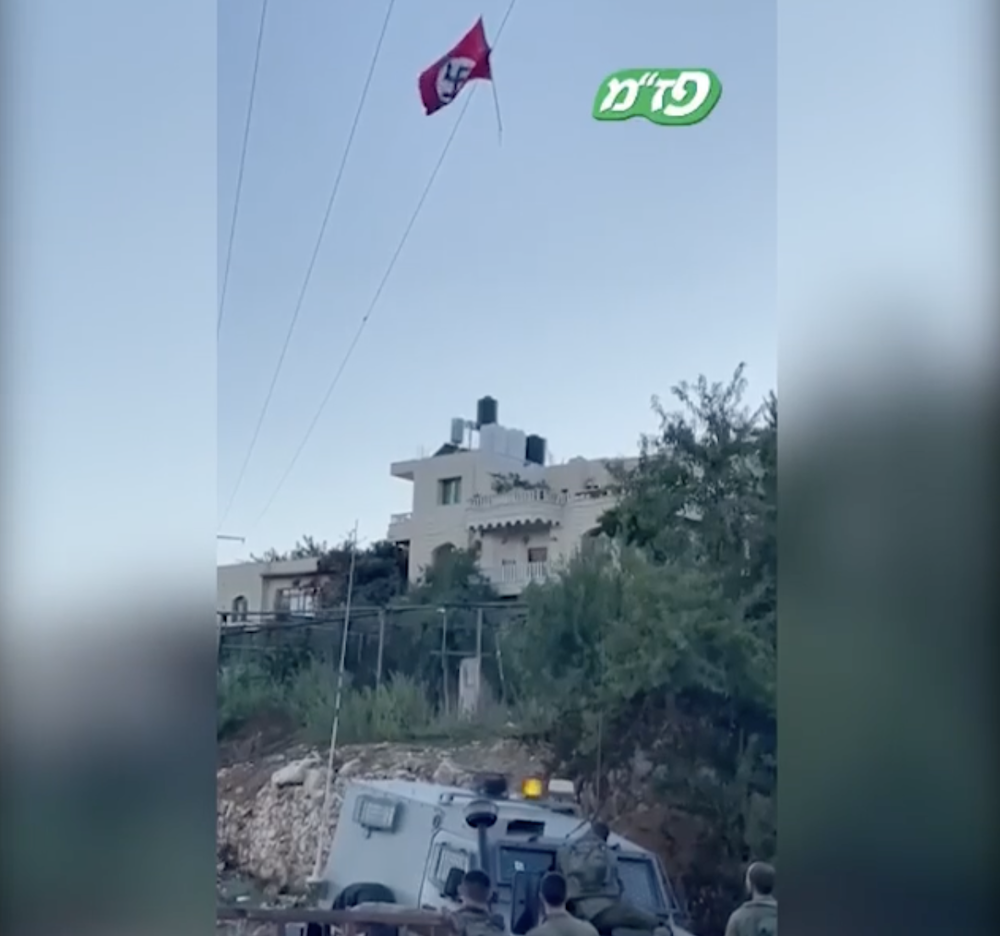 IDF soldiers shoot down a Nazi flag hung on an electrical wire by Palestinians in the West Bank village of Beit Ummar near Hebron, Sept. 25, 2021 (Photo: screenshot Instagram)

During the Second World War, Nazi Germany actively courted the Muslim world. Muslims in then-Palestine used Nazi propaganda as a political tool to undermine British influence throughout the Middle East. Some Arab leaders like the former Jerusalem Mufti, Amin al-Husseini, publicly shared Nazi Germany’s genocidal anti-Semitism and was greeted as a guest of honor by Adolf Hitler in Berlin in 1941. Al-Husseini is considered the founder of the Palestinian national movement and reportedly served as a mentor for the late PLO leader Yasser Arafat.

During their meeting, Hitler and al-Husseini discussed their shared desire to wipe out the Jews of Europe and the Middle East, including the Jewish community in the land of Israel.

While in Germany, al-Husseini and his Nazi hosts inspected the Trebbin concentration camp close to Berlin. After the Second World War, Hitler’s Mein Kampf became a bestseller in much of the Middle East.