That was the headline on Wednesday morning in one of Israel’s leading dailies, Yedioth Ahronoth, announcing that the country’s health minister wants to loosen “ridiculously outdated” abortion rules and make the process easier for women to terminate pregnancies.

Health Minister Nitzan Horowitz wants to remove as many obstacles as possible including scrapping the need for a committee for any woman up to 12 weeks of pregnancy and ending a policy that requires committee members to persuade women not to terminate.

As it is, women can easily get abortions in Israel. There is a committee that must approve applications for pregnancy terminations, but 99% of the requests are approved, Be’ad Chaim Director Sandy Shoshani told ALL ISRAEL NEWS.

But Horowitz, head of the left-wing Meretz party, told the newspaper, “The right to a woman's body belongs to the woman alone.”

“All decisions and medical procedures such as the choice of a mother to have an abortion, must be in the hands of the woman alone. We do not have the moral right to decide for her how to proceed with an unwanted pregnancy,” he said.

“As things stand today,” he continued, “women are forced to go through a degrading process and provide reasons why they want to terminate their unwanted pregnancies – this is absolutely ridiculous. These procedures are totally out-of-date.”

Here are some excerpts from the Yedioth article (link is in Hebrew):

Coming soon the Ministry of Health plans to change an archaic document from 1977 which to this day is required for obtaining approval for termination of pregnancy.

In addition to rewording questions, invasive questions will be removed that women have had to answer, and which focus on their occupation or background of pregnancy, such as: “Since the last menstrual cycle, have you or the man used contraceptives / methods?” Or “Why did you not use abortion methods / methods?” In addition, the form will go through a digitization process so that committee members will receive the full information in advance.

The Ministry of Health is also expected to support legislation aimed at allowing any woman to terminate a pregnancy by the 12th week _ without having to appear before a hospital abortion committee, as required by law today. The Ministry of Health is considering transferring some of the responsibility for the process to the HMOs so that, like other countries in the West, taking the drug to terminate the pregnancy in the early weeks will be done at the HMOs instead of at the hospitals. 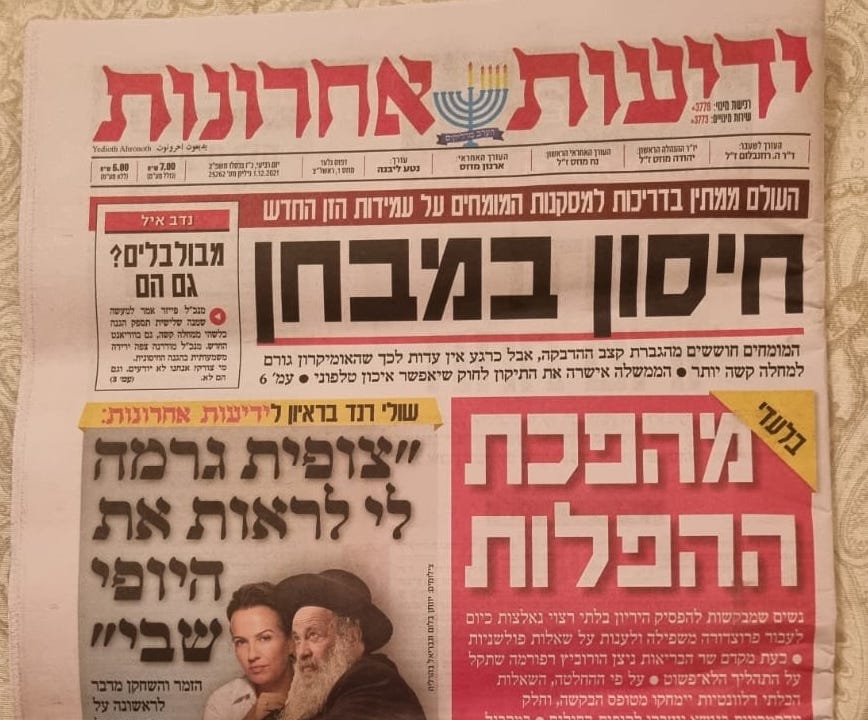 Whether this dramatic legislation can pass the Knesset is another story. Horowitz will need the support of right-wing parties in the coalition including Ra’am, an Islamist party.

Knesset Member Michal Rozin, also of Meretz, said in a statement that “Women deserve full autonomy in everything related to their bodies, and it is time to enshrine it in legislation.”

Shoshani noted that the committee members receive commission for each woman who goes through them seeking an abortion and that the process is also fast.

Most abortions are state-funded. According to this article, in 2020, 17,548 abortion requests were approved according to the Ministry of Health. And in this article, we learn that in 2019, 17,688 women applied for an abortion but only 106 were turned down. The Israel Defense Services performed 1,000 abortions in 2018 for female soldiers, costing the state 5 million shekels ($1.6 million).

The Israeli news comes on the same day the U.S. Supreme Court is considering arguments in a case that has the potential to overthrow Roe v. Wade.

The Court heard arguments from attorneys for Mississippi, an abortion provider from the state and the Biden administration. The state of Mississippi is defending a state law banning most abortions after the 15th week of pregnancy.

On the contrary, in Israel, women can get abortions for many reasons even after 24 weeks including if the baby is found to have a cognitive or physical impairment or if carrying the baby to term would damage the mother's mental or physical health.

However, the article interviewed several women whose requests were rejected by the committee.

One woman told Yedioth that she was in an abusive relationship but the committee still rejected her application.

"I explained to them that I was dealing with severe violence at home, but it did not interest them. I even came with a document from a social worker explaining the situation at home. I cried my soul out but it did not interest anyone sitting there. They sent me to bring a letter from a psychiatrist, which I could not pay for without Involving my husband," she said.