Israel’s Antiquities Authority announced on Monday that excavations near the Church of Gethsemane in Jerusalem’s Kidron Valley have unearthed a mikveh (Jewish ritual immersion bath) dating from the time of Jesus’ First Advent 2,000 years ago.

The IAA also unearthed fragments of a church that was built on the site during the Byzantine period, approximately 500 years later.

The excavations at the church - also known as the Church of the Agony and the Church of All Nations located at the foot of the Mount of Olives and just east of the Old City - are being carried out ahead of new construction intended to expand the facilities for hundreds of thousands of Christian pilgrims who visit the site annually.

The Catholic churches in Israel have invested heavily in tourism infrastructure in and around the sites it owns in Jerusalem, Nazareth, Bethlehem and elsewhere in the country. Some of the property deeds go back hundreds of years and were issued by Ottoman authorities, while some of the churches, monasteries and pilgrimage hostels were built on the ruins of even more ancient structures which date back to the crusades and earlier.

The Catholic Church's efforts to improve its facilities and encourage pilgrimage to the Holy Land have been done with the enthusiastic cooperation of the Israeli government, which benefits from the revenue and incoming tourism as well as the positive public and diplomatic relations which the arrangement provides.

However, the construction of so many buildings, tunnels, etc. in and around ancient sites also leads to many archaeological discoveries, which in turn lead to additional expenses for all parties, but also generate additional publicity and interest in these sites for tourists, archaeologists and historians. Monday’s announcement of a ritual bath from the Second Temple Period on the site is the first such archaeological evidence uncovered of activity in the area during that time. Previously, the only such finds at the site were of Byzantine and Crusader churches, which mostly occurred during the construction of the Church of All Nations which was carried out from 1919-1924. 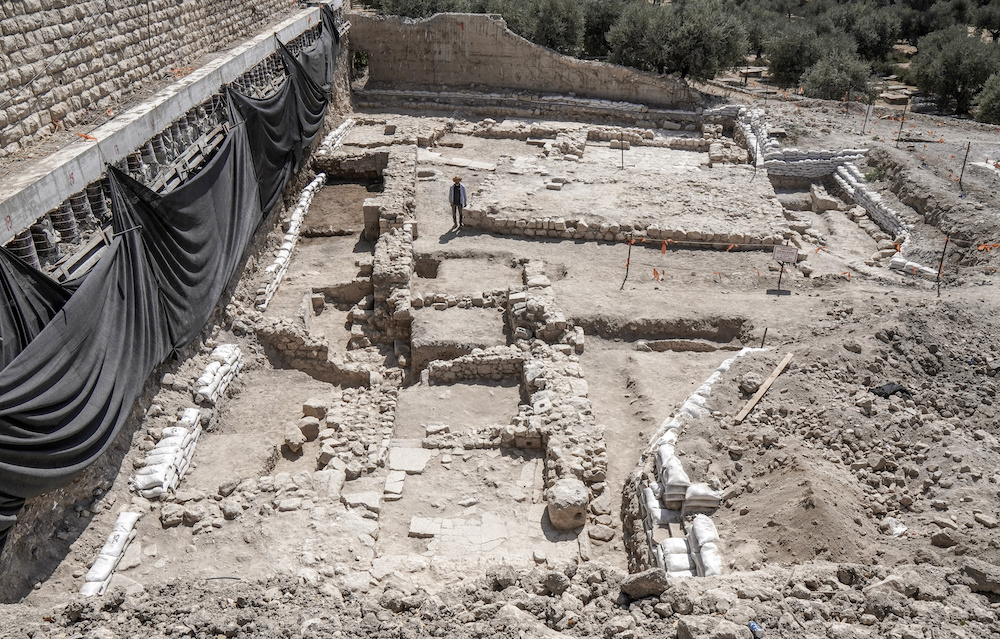 “The discovery of the ritual bath probably confirms the place’s ancient name, Gethsemane,” said Amit Re-em, Jerusalem District archaeologist for the Antiquities Authority. “Most ritual baths from the Second Temple period have been found in private homes and public buildings, but some have been discovered near agricultural installations and tombs, in which case the ritual bath is located in the open. The discovery of this bath, unaccompanied by buildings, probably attests to the existence of an agricultural industry here 2,000 years ago – possibly producing oil or wine. The Jewish laws of purification obliged workers involved in oil and wine production to purify themselves. The discovery of the ritual bath may therefore hint at the origin of the place’s ancient name, Gethsemane (Gat Shemanim, ‘oil press’), a place where ritually pure oil was produced near the city.”

“The excavation at Gethsemane is a prime example of Jerusalem’s archaeology at its best, in which various traditions and beliefs are combined with archaeology and historical evidence. The recently discovered archaeological remains will be incorporated in the visitors’ center being built at the site and will be exhibited to tourists and pilgrims, who we hope will soon be returning to visit Jerusalem.”

The IAA has been digging at the site with a team of scholars including experts from the Catholic Studium Biblicum Franciscanum and the Catholic Custos of the Holy Land, Father Francesco Patton.

“Gethsemane is one of the most important sanctuaries in the Holy Land, because in this place the tradition remembers the confident prayer of Jesus and his betrayal and because every year millions of pilgrims visit and pray in this place," he said in a statement. "Even the latest excavations conducted on this site have confirmed the antiquity of the Christian memory and tradition linked to the place, and this is very important for us and for the spiritual meaning connected with the archaeological findings. I greet with great pleasure this fruitful cooperation between the Custody of the Holy Land, the Studium Biblicum Franciscanum and the Israel Antiquities Authority and I hope that we will be able to join our scientific competences for further future collaborations.”