News of terror attacks at the Temple Mount always serve to draw our attention back to the streets of the Jerusalem’s Old City as it did again these past few weeks.

Being a Jerusalemite myself, it doesn’t take much to refocus my attention on what’s happening in my hometown.

But around a year ago, something very different drew my focus back to Jerusalem. It all started when I received a call from a stranger who told me that sacred stones were discarded and needed to be rescued, stones that were dug from no other place than Mt. Moriah – the Temple Mount.

At the end of the conversation, I felt that I relived a scene from an Indiana Jones movie, so obviously I was intrigued. A week later I found myself wandering the hills of Jerusalem with my new friend, Gary. Gary is no Indiana Jones, but shortly after we met it became obvious to me that he is all about adventure. And what an adventure it was.

We found ourselves standing near a pile of rubble.

“You see this?” Gary asked. “These are all stones dug from Temple Mount.”

There it was again, the feeling of being on the set of Indiana Jones. But this was real. I asked for a detailed explanation, and what I heard was jaw-dropping.

The Temple Mount in Jerusalem has been a crossroads of the three great monotheistic religions: Judaism, Christianity and Islam. It is the site where Abraham nearly sacrificed his son, Isaac, to prove his faith. King Solomon built the First Temple on this mountaintop at about 960 B.C., only to have it torn down nearly 400 years later.

In the first century B.C., Herod expanded the Second Temple, turning Jerusalem, according to Pliny the Elder, into “...by far the most famous city, not of Judea only, but of the East.” It is there that Jesus Christ lashed out against the money changers in the temple, and was later crucified only a few hundred yards away. This amazing temple was then destroyed by the Romans in A.D. 70.

A territorial prize occupied or conquered by a long succession of peoples including Babylonians, Persians, Greeks,  Romans, Byzantines, Umayyads, Abbasids, Crusaders, Ayyubids, Mamluks, Ottomans and British, the Temple Mount has seen more momentous historical events than perhaps any other piece of land in the world.

In the southeast corner of the compound, there are underground vaulted arches that have been known for centuries as “Solomon’s Stables” which functioned as stables during the Crusader era of the 11th century. The Waqf (an Islamic council that currently controls the compound) converted the area into a mosque and excavated two arches to create a massive entranceway. In doing so, bulldozers removed soil, stones and antiquities from the very site where the Temple once stood and discarded this sacred material in a pile of debris.

A wealth of artifacts was found in the material removed from beneath the sacred compound, ranging from scarabs from the second millennium B.C. to the World War II uniform badge of a British soldier. Examples include a bronze coin dating to the Great Revolt against the Romans (66-70 A.D.), bearing the Hebrew phrase, “Freedom of Zion,” a silver coin stamped with the image of the Church of the Holy Sepulchre, minted during the Crusader era of the 11th Century A.D. and an abundance of coins, ornamental crucifixes, and fragments of columns from Jerusalem’s Byzantine era (380–638 A.D.). Following the removal of the artifacts from the debris pile, the remaining material and stones were left forever to be forgotten.

And there we were. Staring at these discarded sacred stones that will remain there until the end of times without people knowing their origin or even their worth.

We knew we had to do something. After confirming the source of the stones with archaeologist Dr. Avraham Solomon, we decided to find new guardians for these stones, guardians who will restore the importance and respect these stones deserve.

After more than a year, like proud parents, we gaze with pride at our new venture, My Evven (which means “My Stone” in Hebrew), which aims to find guardians around the world for these stones. 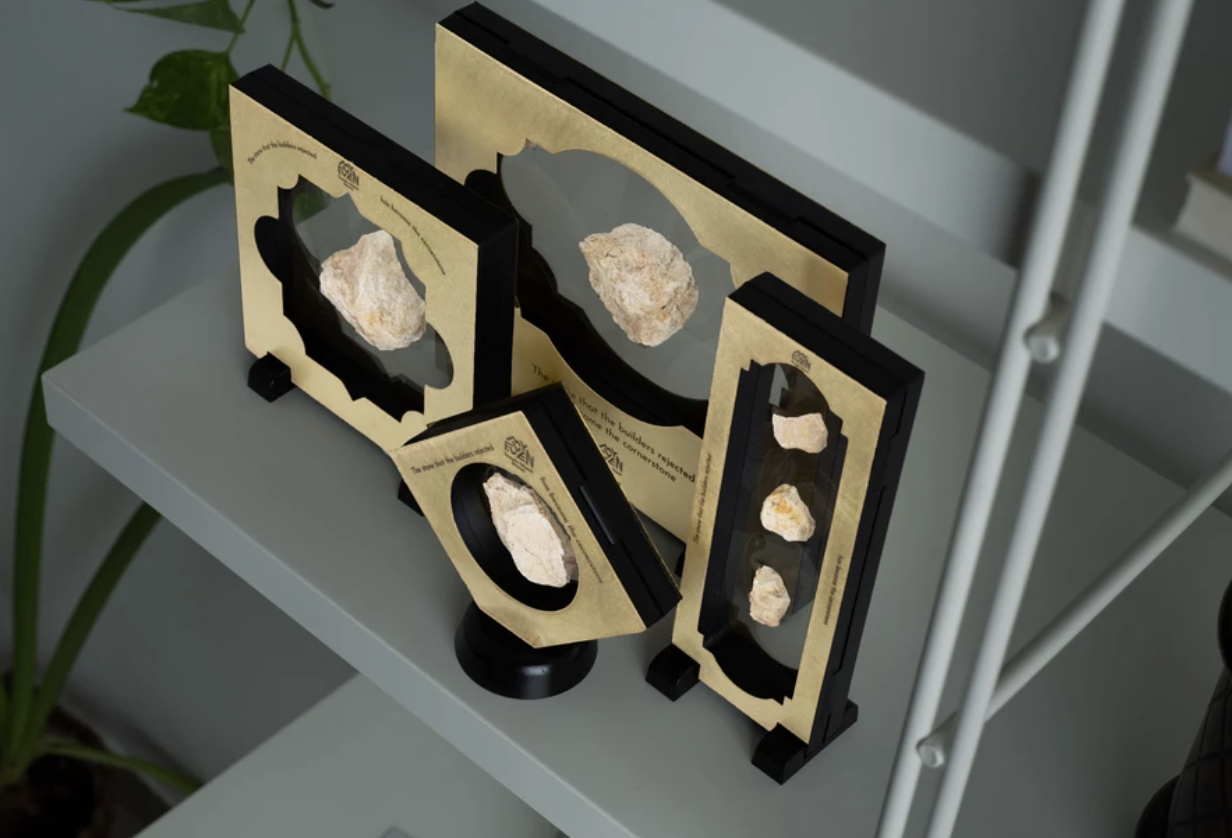 Examples of stones from My Evven

We still debate whether we gave these stones the justice they deserved. We sure did try. But you can judge for yourselves.

In the meantime we hope these stones find new homes that appreciate their ancient history.

To see what the author has done with these "rocks" that he found, visit My Evven.