The Israel Antiquities Authority announced on Tuesday the groundbreaking discovery of two dozen unique 2000-year-old biblical scroll fragments reportedly containing passages from the books of Nahum and Zechariah – located in a cave in the Judean desert.

“These are the things you are to do: Speak the truth to one another, render true and perfect justice in your gates. And do not contrive evil against one another, and do not love perjury, because all those are things that I hate—declares the Lord.” Zechariah 8:16–17

These verses were among the scriptures discovered.

It is the first time such historical artifacts have been unearthed since the accidental discovery of the Dead Sea Scrolls by Bedouin shepherds in the Qumran caves in the late 1940s. 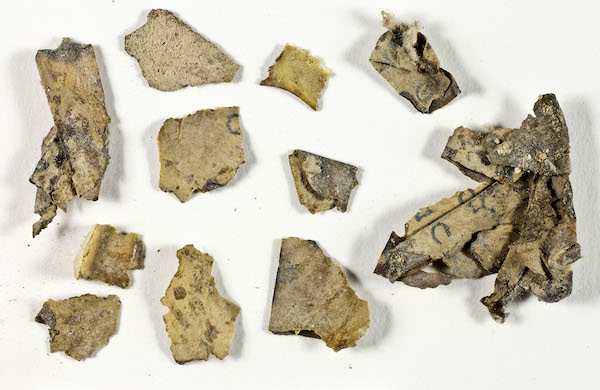 Sections of the Book of the Twelve Minor Prophets scroll discovered in the Judean Desert expedition prior to their conservation. (Photo: Shai Halevi/ Israel Antiquities Authority)

The Nahal Hever cave is nicknamed “Cave of Horror” due to its inaccessibility and because some 40 skeletons of adults and children were discovered there decades ago. The cave, which could make for an ideal backdrop to an Indiana Jones movie, is located 80 meters below a clifftop and can only be reached by rope, making for a challenging excavation.

The newly discovered scroll fragments were written in Greek, but the name of God is in paleo-Hebrew. In addition, the archaeological team discovered a 10,500-year-old well-preserved basket, one of the oldest complete baskets in the world. Even more remarkably, the team uncovered a 6000-year-old mummified child skeleton. In cooperation with Dr. Hila May from the Tel Aviv University School of Medicine and with the help of a CT scan, prehistorian Ronit Lupu estimates that the ancient child skeleton was between 6 to 12 years old.

Lupu shared about discovering the child skeleton, which was well preserved with cloth, hair and even some skin due to the arid climate conditions in the desert cave.

“It was obvious that whoever buried the child had wrapped him up and pushed the edges of the cloth beneath him, just as a parent covers his child in a blanket. A small bundle of cloth was clutched in the child’s hands,” Lupu said.

“The desert team showed exceptional courage, dedication and devotion to purpose, rappelling down to caves located between heaven and earth, digging and sifting through them, enduring thick and suffocating dust, and returning with gifts of immeasurable worth for mankind.” 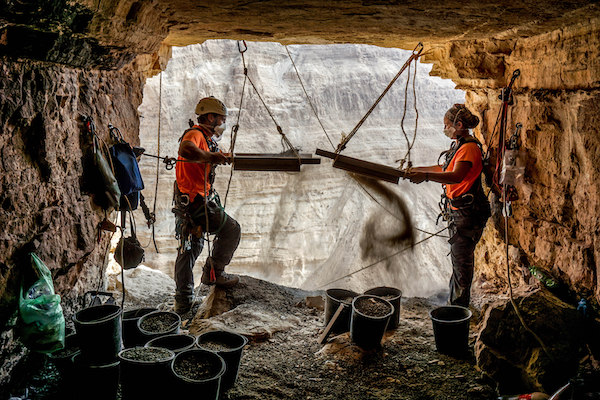 Much of the Judean desert caves are located beyond the green line, inside the West Bank and Israeli authorities face the challenge of preventing looters from stealing historical artifacts in the area.

“This is definitely an exciting moment, as we present and reveal to the public an important and significant piece in the history and culture of the land of Israel,” Hizmi stated.

In the early 1960s, an expedition led by the prominent late Israeli archaeology professor Yigael Yadin in the same area of the Judean desert, discovered ancient letters and coins proving the existence of Bar Kokhba, the renowned Jewish leader who led a revolt against the Roman Empire from 132 to 135 CE. In the 1960s, Yadin also led an extensive archaeological expedition in the famous desert fortress Masada facing the Dead Sea.

The Judean Desert contains a myriad caves and historical sites, some accessible, some not. Over the centuries, Jewish and Christian rebels and dissidents sought refuge in the Judean Desert region. Despite significant archeological work over the decades, only around 50% of the caves have so far been surveyed, leaving plenty of work and potential discoveries for the future.