After rapper and designer Kanye West posted on Twitter that he wanted to go “death con 3” on the Jews – a statement which drew widespread shock and condemnation – Bishop Glenn Plummer said he is worried that all Black Americans will be labeled anti-Semitic as well.

“What I’m concerned about is there are people who will do the same thing he’s just done – they will categorize Black people, Black Americans and say they are all anti-Semitic,” Plummer said.

On the contrary, Plummer told ALL ISRAEL NEWS that “a large majority of Black Americans have a love relationship with American Jews and Israel. And we choose to bless Israel. Tens of millions of African Americans love Israel, love Jews and condemn anti-Semitism.”

“This is one individual who doesn’t speak for anyone but himself,” Plummer emphasized.

On the other hand, Plummer – bishop of Israel for the Church of God in Christ (COGIC) – speaks for millions. Primarily comprised of Black congregants, COGIC is the largest Pentecostal denomination in the United States and has millions of members in 112 countries around the world.

Kanye West at the Givenchy show as part of Paris Fashion Week in Paris, France, Oct. 2, 2022. (Photo: Jana Call me J/ABACAPRESS.COM via Reuters)

West – known also as Ye – was banned from social media platforms earlier this month after he told his 31.4 million followers that he would go “death con 3 on JEWISH PEOPLE.”

“The funny thing is I actually can’t be Anti-Semitic because black people are actually Jew, also You guys have toyed with me and tried to black ball anyone whoever opposes your agenda,” West added in the now-hidden post.

Plummer, who lives in Jerusalem along with his wife Ruth, noted the nuances of a general statement against “Jewish people” which ignores the various racial and religious distinctions of Jews who can be American, Israeli, Ethiopian, South American, European, North African, Asian, etc. and live in almost any country.

“If you took it seriously, you would have to raise the question, ‘Which Jews are you taking about?’ Just the Jews in Israel alone are multi-cultural and multi-religious,” Plummer said pointing out the various religious streams and ethnic backgrounds of Jewish Israelis.

Plummer welcomed the largest ever delegation of African Americans to Israel in September. He noted a photo that the participants took with a female border guard serving in the Israel Defense Forces. She also happens to be of Ethiopian descent.

“When Kanye West says he’s ready to go defcon 3 on Jews, here’s a photo I just took in Hebron Israel last month. This Israeli Jew stands ready to defend her people from any threats,” Plummer said. “I think Mr. West needs to rethink his nonsensical comments and educate himself on the diversity of Jews.” 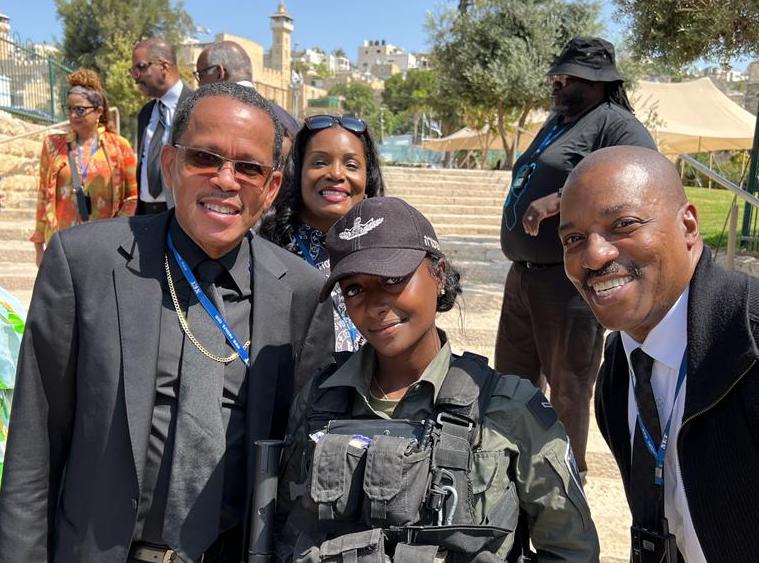 The reports that West has been diagnosed with mental illness must also be taken into account, Plummer said. While an illness doesn’t justify such statements, he said it could explain the ambiguity and lack of context in West’s screed.

“I read what he tweeted and I don’t know the back story – I don’t know what he’s mad at or what Jewish person offended him,” Plummer said. “It is absurd. It is shameful.”

“If it is true that we’re dealing with a person who has been formally diagnosed… that would help explain a lot. Many of us have people in our families that are struggling,” Plummer said. “However, we have to take (West’s statements) seriously because all that some people need to hear is something like that to fuel their fire.”

In other words, he said, people who are already prone to anti-Semitism will use a statement like this to condone their actions.

But Plummer does not believe that will be the African-American community.

“(West) has no power to change the mind of any Black American who has a strong relationship with Israeli Jews or American Jews. He hasn’t turned their thinking one iota,” Plummer assured.

“You can’t condemn a whole group of people because of extreme statements,” Plummer continued. “Let’s be careful when we hear these outlandish statements when people like Kanye West make them – he is not speaking for anyone but himself.”

“Let’s be careful not to categorize Black Americans. That’s a statement made by one individual that has been diagnosed with a mental illness and he does’t represent anyone,” Plummer said.

“He’s not apologetic or repentant – and he needs to be,” Plummer said. “He needs to take his medicine and calm his spirit because this incites other people who are looking for an opportunity to do something.”

On Monday, Parler – the “uncancelable free speech platform” – and West announced that the rapper would purchase the conservative leaning platform.

“In a world where conservative opinions are considered to be controversial we have to make sure we have the right to freely express ourselves,” West and Parler said in a statement.