The Israel Antiquities Authority (IAA) announced this week that a dig in the village of et-Taiyiba in the Jezreel Valley of northern Israel has led to the uncovering of a stone engraving with an inscription in Greek saying that the building it was on was dedicated to “Jesus, the son of Mary.”

The engraving is believed to have been mounted on the frame of the entrance door to one building before it was dismantled and the stone was put into secondary use in the wall of another building many years later. This was a common practice in the ancient world which can be observed in the walls to Jerusalem’s Old City, which were built by the Ottoman Turks in the 1600’s, mostly with fresh with stones that were quarried at the time but also with older stones from pervious structures.

The original building that the inscription in et-Taiyiba was part of is being dated to the late 5th Century AD, when the Byzantine Empire ruled the Holy Land. However, the later structure which the stone was part of is believed to have been assembled many years later, perhaps at late as the early Islamic period. 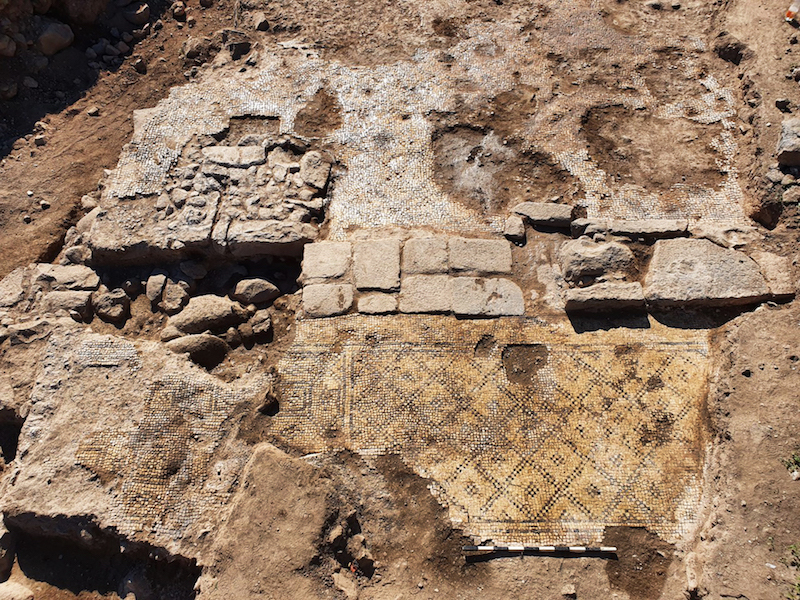 The magnificent building with the inscription incorporated in secondary use. (Photo: Tzachi Lang, Israel Antiquities Authority)

The inscription was translated by Leah Di-Segni of the Institute of Archaeology of the Hebrew University of Jerusalem, who said that it reads in full “Christ born of Mary. This work of the most God-fearing and pious bishop [Theodo]sius and the miserable Th[omas] was built from the foundation - -. Whoever enters should pray for them.”

“The inscription greets those who enter and blesses them,” Di-Segni explained. “It is therefore clear that the building is a church, and not a monastery: Churches greeted believers at their entrance, while monasteries tended not to do this.”

She went on to say that the individual referred to in the inscription, Theodosius, was probably an early Christian official, an archbishop in the area with headquarters in ancient Bet She’an and covering the surrounding area, including the site of the modern-day city of et-Taiyiba.

“This is the first evidence of the Byzantine church’s existence in the village of et-Taiyiba and it adds to other finds attesting to the activities of Christians who lived in the region,” said the IAA’s Walid Atrash. “Remains of a church from the Crusader period were previously uncovered at the site, and a monastery discovered more recently by Nurit Feig of the Israel Antiquities Authority and Moti Aviam of Kinneret College in Kfar Kama is one of a series of monasteries that were under the jurisdiction of the Bet She’an religious metropolis.”

The site in et-Taiyiba, like many others administered by the Israel Antiquities Authority, is being worked by a combination of professional archeologists, local residents, students and volunteers from around the world, in keeping with the IAA’s long-standing policy of promoting interest in archaeology and history by making hands-on experiences available to the general public.