An extremely rare quarter-shekel silver coin, minted by Jewish rebels 2000 years ago, returned to the State of Israel in an official ceremony at the Manhattan district attorney’s office on Monday.

In 2002, Arabs stole the coin from the Elah Valley – where the Bible describes the Israelites encamping during the battle of David and Goliath – and smuggled it out of Israel.

The coin dates to the fourth year of the Great Jewish Revolt, or “the First Roman-Jewish War,” which spanned 66–73 A.D.

It took two decades for Israel to trace and retrieve the coin, as it was sold and resold through black antiquities markets in Israel, Jordan and the United Kingdom. The coin’s ultimate recovery came through intense cooperation between the Israel Antiquities Authority and the Antiquities Trafficking Unit of the Manhattan district attorney’s office.

Quarter-shekel coins from the fourth year of the revolt are so rare that the British Museum in London has just one in its collection, while three other coins “circulate” in the black market and among various collectors.

The Roman Empire granted local rulers permission to mint bronze coins only; a license to mint silver coins would have been unusual, if not counter to Roman policy.

“Because of this, the minting of silver coins by the leaders of the Great Revolt was in fact a declaration of independence by the Jews in the land of Israel, a statement against the mighty empire that stood before them,” said Ilan Hadad, archaeologist and inspector in charge of commerce at the Antiquities Theft Prevention Unit of the IAA. “Many of the rebels’ silver coins were struck over imperial silver coins, covering the emperor’s face with Jewish motifs. This gave the coin a much greater symbolic value than the monetary value of the coin itself.” 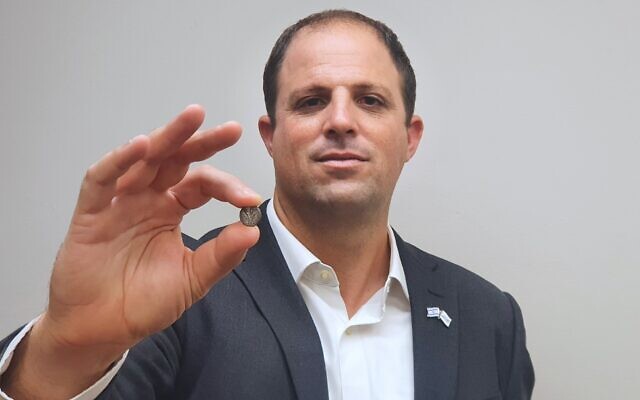 At the New York ceremony, Israeli representatives emphasized how the coin was additional proof of the Jewish people’s ties to Israel.

“This singular artifact is a stark reminder of the Jewish people’s millennia-old connection to the land of Israel. We thank the IAA and the D.A.’s office for restoring this priceless coin to its rightful home,” said Ambassador Asaf Zamir, the consul general of Israel in New York.

Also in attendance at the district attorney’s office, Israeli Ambassador to the United Nations Gilad Erdan said the coin served as proof of the truth in face of attempts to erase the Jewish identity of Israel.

“The Palestinians are working at the U.N. to hide the history of our people and erase our connection to the land of Israel. But no matter how many lies are spread, the truth cannot be erased and the truth is laid out here this evening for all to see,” Erdan said. “This coin is evidence of the eternal bond between the Jewish people and the land of Israel, and as Israel's ambassador to the United Nations, I can also utilize it in my mission to fight the lies of our enemies.”

Col. Matthew Bogdanos, prosecutor at the Manhattan district attorney’s office and chief of its Antiquities Trafficking Unit praised the cooperation of the ATU and the IAA in retrieving the coin.

“Today’s repatriation to Israel of this extraordinary coin represents a cherished piece of history finally going home. But it also represents an equally extraordinary partnership … It is a partnership that should be used as a model in recovering pillaged cultural heritage around the world,” Bogdanos said.