The earliest mosaic ever dedicated to Jesus might soon be excavated and eventually become a new tourist site, according to a Times of Israel report on Monday.

The mosaic  - discovered inside the ruins of a Christian prayer hall dating back to the third century A.D. - has an inscription in ancient Greek, “to the God Jesus Christ,” and is the oldest known place in Israel that mentions the name of Jesus as God, according to the Israel Antiquities Authority (IAA).

“This structure is interpreted as the oldest Christian prayer house in the world… and in fact, it tells the story of Christianity even before it became official,” the IAA wrote on Facebook Sunday. The mosaic, first discovered in 2004, also featured images of fish, considered a symbol of early Christianity.

“We have here archaeological evidence of an Early Christian community, whose members also included Roman army officers, from a period prior to the recognition of Christianity as a religion and years before it became the official religion of the empire,” wrote Israeli archaeologist Dr. Yotam Tepper, from the Zinman Institute of Archaeology at Haifa University. “All these factors allow us to examine questions relating to the development of the Christian religion before the Emperor Constantine, as well as issues connected with the Roman army in the eastern part of the empire in general, and the Land of Israel in particular.”

The excavations in the area have revealed other finds as well.

“Among the antiquities uncovered in the excavations were the remains of buildings and alleys, an oil press, stable, water cisterns, storage and cooking installations, ritual baths and a multitude of small finds,” Tepper wrote. “It was also determined that the site there existed from the Roman period until the latter part of the Byzantine period, with a few fragmentary and temporary remains that date to the Early Islamic period and later.” 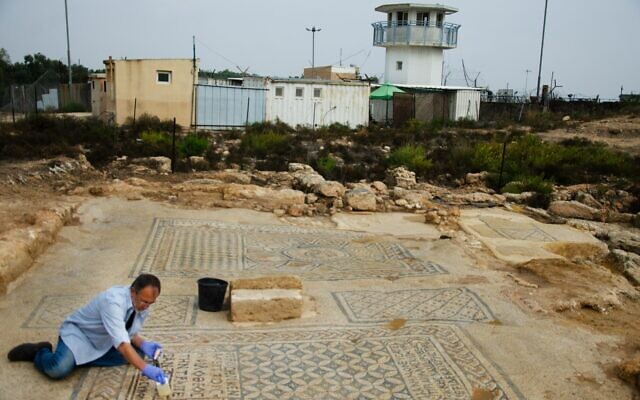 The mosaic lies hidden underneath Megiddo Prison and Detention Center, located in the lower Galilee region in the northern part of Israel. For years, Israeli authorities have been planning to move the prison to a new location to allow for  the excavations – due to begin June 2022 – which will ultimately become a new archaeological park. In addition, local authorities are planning to build hotels at the site.

Apart from preparations for the new tourist site, the Megiddo prison will be relocated due to its violation of Israel’s newly-adopted European standards for the minimum space allowance per inmate. An official from Megiddo's regional council told Haaretz on Wednesday that Megiddo inmates will be moved to a new and improved facility, along with prisoners from three other Israeli jails that were also failing to comply with the new standards.

The prison will be relocated to a location approximately 1.5 kilometers (roughly a mile) away from its current location.

The Megiddo prison site holds historical value in itself. Built by the British in the 1940s during the British Mandate, according to Tepper in a 2018 interview, the British “knew perfectly well they were erecting Megiddo Prison on a historic site.”