Major League Baseball players Jeimer Candelario, Nelson Cruz and Cesar Hernadez took time out of the offseason to play ball with an enthusiastic group of kids in the Holy Land this weekend.

The Big Leaguers were met by around 350 young ballplayers ranging from T-Ball to the National Team, all registered with the Israel Association of Baseball (IAB) at the newly opened Ezra Schwartz Ballpark in Ra’anana.

The clinic was a joint effort between the IAB, the Dominican Republic Embassy in Israel and the Philos Project’s Philos Esperanza Series.

It featured meet’n’greet autograph sessions with the pros while kids were divided into age groups to practice skills in the batting cages, and each corner of the field at the new Ra’anana complex.

The Philos Project is a Christian organization with a goal to further positive Christian engagement in the Near East, and the Philos Esperanza Series is a division of the organization that focuses specifically on building relationships between the Latino and Jewish community through baseball, to “hit anti-Semitism out of the park.” 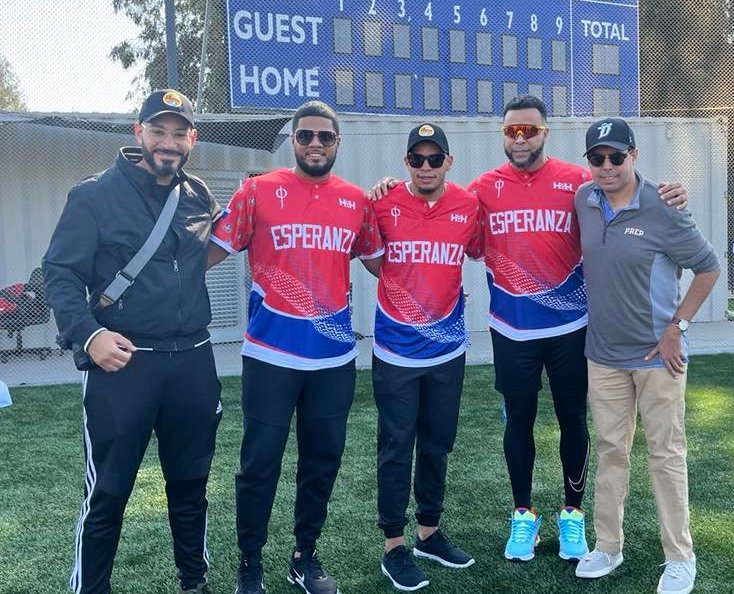 Baseball in Israel has grown with a lot of grit and heart. What happens on the field is almost always an expression of a bigger story behind the scenes, and this clinic was just that.

In 2020, when the Dominican Republic’s Ambassador to Israel Ernesto Torres Pereyra arrived, he immediately started looking for baseball and found out about the IAB. Pereyra played baseball his entire life, and also served in Korea and Japan where he learned about baseball programs in different cultural contexts.

The embassy set up a meeting with IAB President Jordy Alter and general manager of the Olympic and National Teams, Peter Kurz and Pereyra who described the relationship as “love at first sight.”

“The embassy is extremely committed to the promotion of baseball as part of our national grant and also an important element of our culture,” Pereyra said. 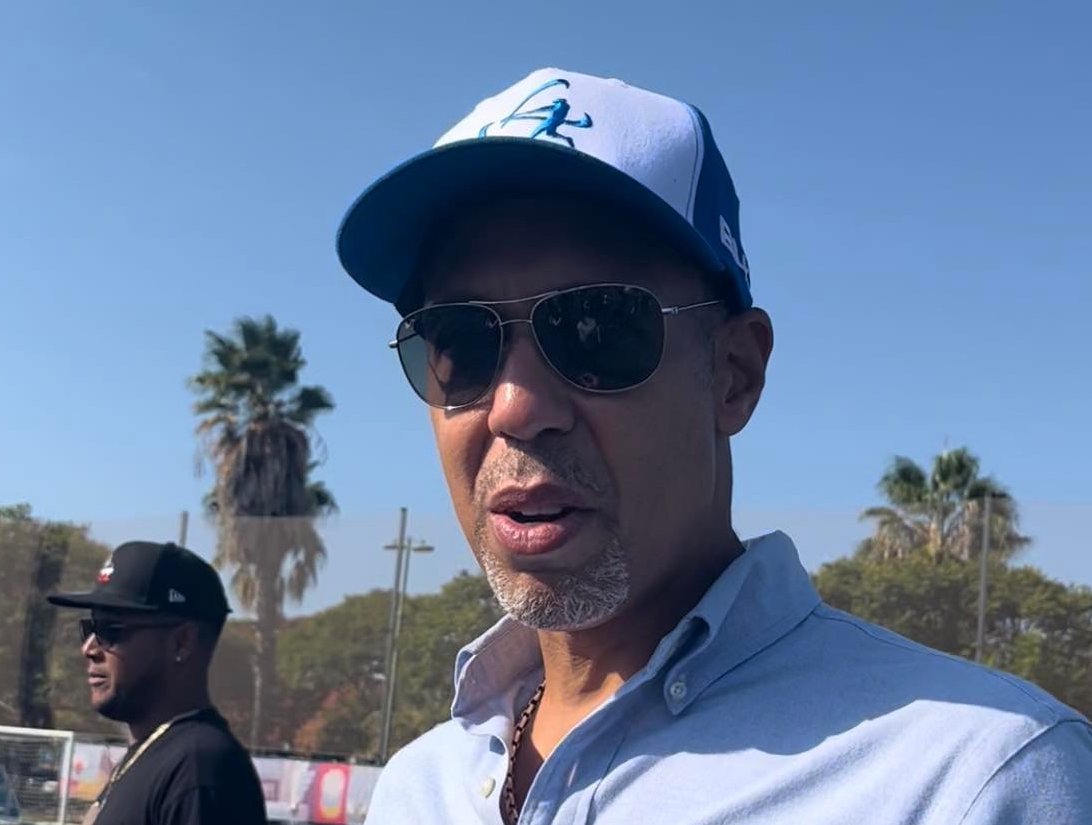 The ambassador connected the IAB with the Philos Project’s Latino division director, Jesse Rojo, and during the winter of the 2021-22 season, six elite players from the Israeli National Team went to the Dominican Republic to train with their academies.

The National team representatives also went on a cultural tour to understand the important historic connection between the two nations. In 1938 The Dominican Republic committed to receiving between 50,000 and 100,000 Jewish refugees, providing work and living space on the former Sousa Banana Plantation.

Though the motives of Dominican dictator Rafael Trujillo remain in question, the offer was greater than any other nation at that time, and served as a lifeline to Jewish families fleeing Nazi Germany.

The Jewish refugees built a synagogue and, with a lot of trial and error, eventually turned the plantation into a successful beef and diary co-op.  The dairy farm still exists and is currently being run by around 25 Jewish families today.

“The Sousa project is a monument to the Latino Jewish friendship… but the Synagogue, Jewish Museum and a Little League field have fallen into disrepair,” said Alex Jobey of the Philos Project.

It was out of a desire to see this history preserved that the Philos Esperanza Series was born.

“The idea of the Philos Esperanza Series is to take players to Israel to learn about the Latino Jewish relationship, and to further revitalize Sousa through a charity softball game in the Dominican Republic between Jewish players and Dominican players,” said Jobey. 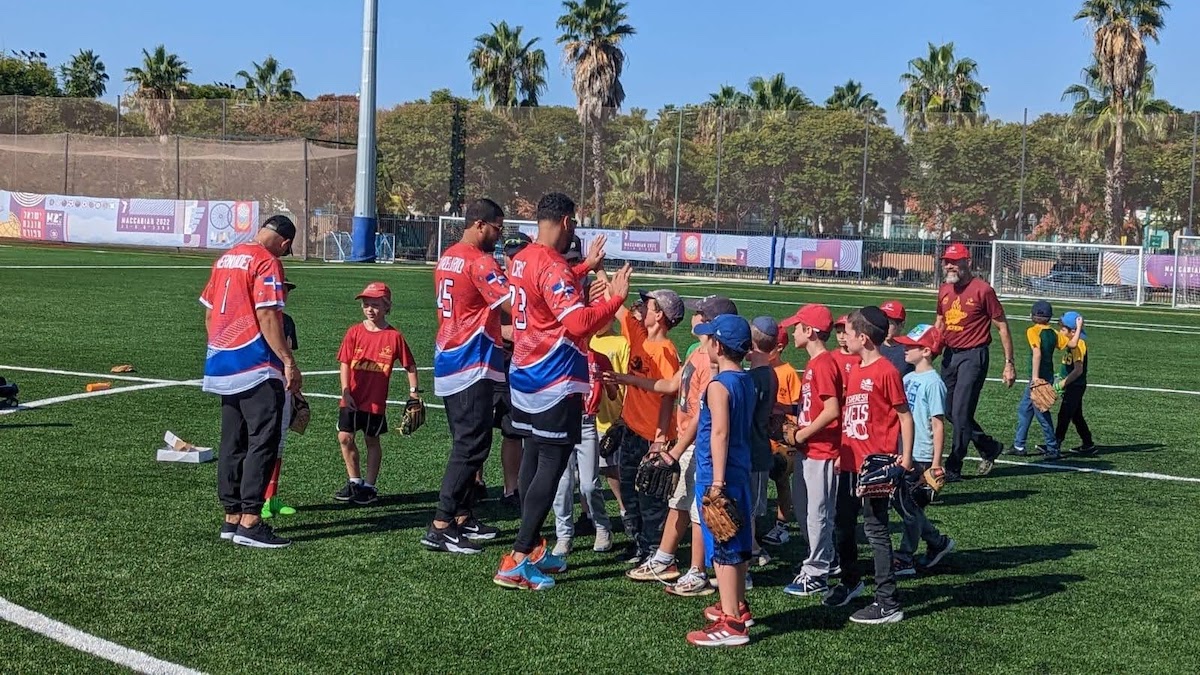 With Israel and the Dominican Republic playing in the same pool in the 2023 World Baseball Classic, the timing is perfect.

“The hope of bringing these players to Israel is an effort to restore Jewish heritage in Latin America,” Rojo added. “The Jewish community has contributed significantly to our culture and our history. In Dominican Republic there is a Jewish heritage that is dying.  We decided to combine two things that I love, Israel and baseball…. Being able to bring these baseball players to Israel to inspire them.”

Very excited to be back in Israel to host a baseball clinic with three amazing Latino MLB players, as part of our Philos Esperanza Series initiative.

Over 100 Israeli kids will have a chance to learn the game of Baseball and knock antisemitism out the ballpark. pic.twitter.com/FDSaoOcN0X

“I came for the kids, and because I love Israel,” Hernandez said. “Its really beautiful here.” 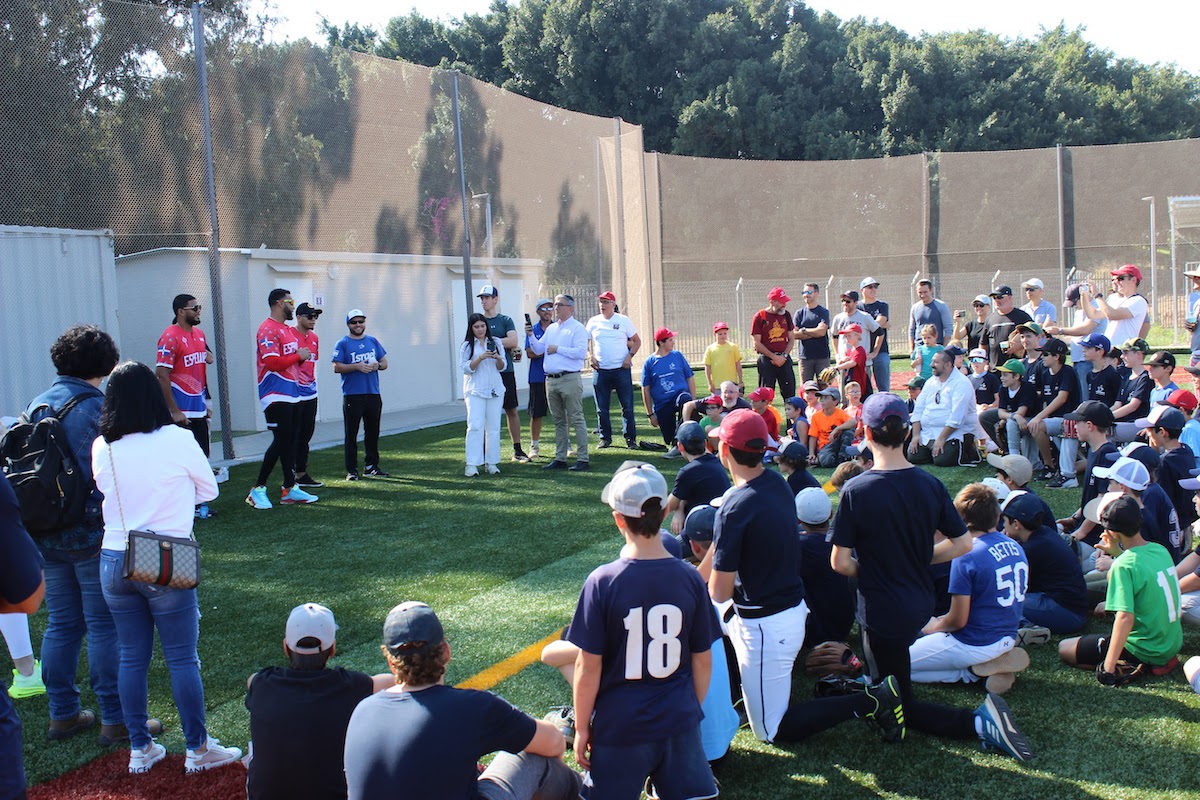 The MLB players speaking to a group of IAB players and parents. (Photo: Frankie Sachs)

The other men expressed similar sentiments between signing balls and gloves and posing for photos with excited kids.

They all seemed pleasantly surprised when some of the kids pulled out a baseball cards, all the way over here in Israel.

Lior Margulis, a 10-year-old academy member from Tel Aviv was thrilled to speak to the Major Leaguers in his native Spanish.

“It was amazing meeting three MLB players at the same time here in Israel. They inspired me to keep playing baseball and help Team Israel to win," he said. 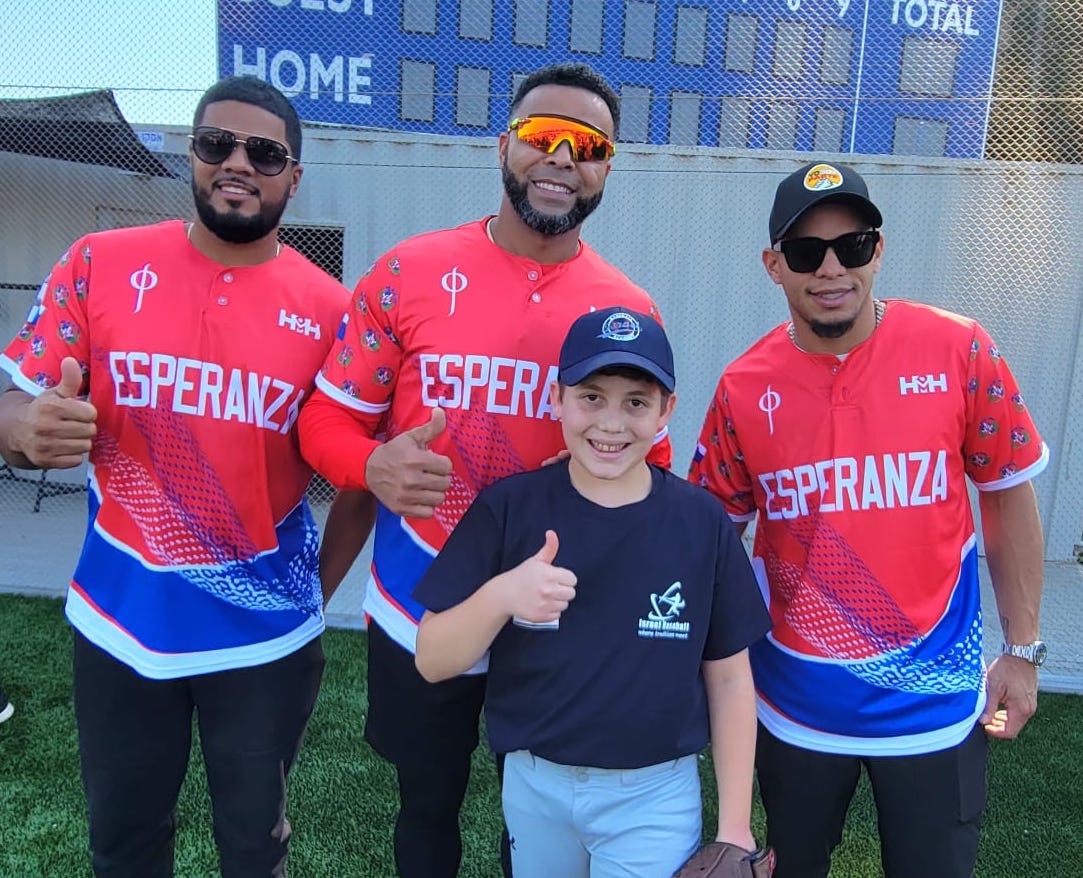 Head coach for the IAB’s Academy and local division teams Louie Miller said it was a special experience for these children.

“They let the kids see they are human and worked really hard to get where they are,” he said.

Miller made aliyah (immigrated to Israel) with his family from Pittsburg in 1998. He grew up in the IAB system and started coaching at age 16. He now works for the league full time.

Opportunities like this clinic are something that increases enthusiasm about baseball here in Israel.

“They get us connected with high-level baseball,” Miller said comparing baseball in his youth to what it is now in Israel. “These guys were untouchable, but now we have guys who can grow up here and be pro.”

Miller was referring to home-grown Israeli ball player, Alon Leichman, who played college baseball in the U.S. and then went on to become a minor league pitching coach for the Seattle Mariners. Leichman is currently playing with a team in the Dominican Republic. 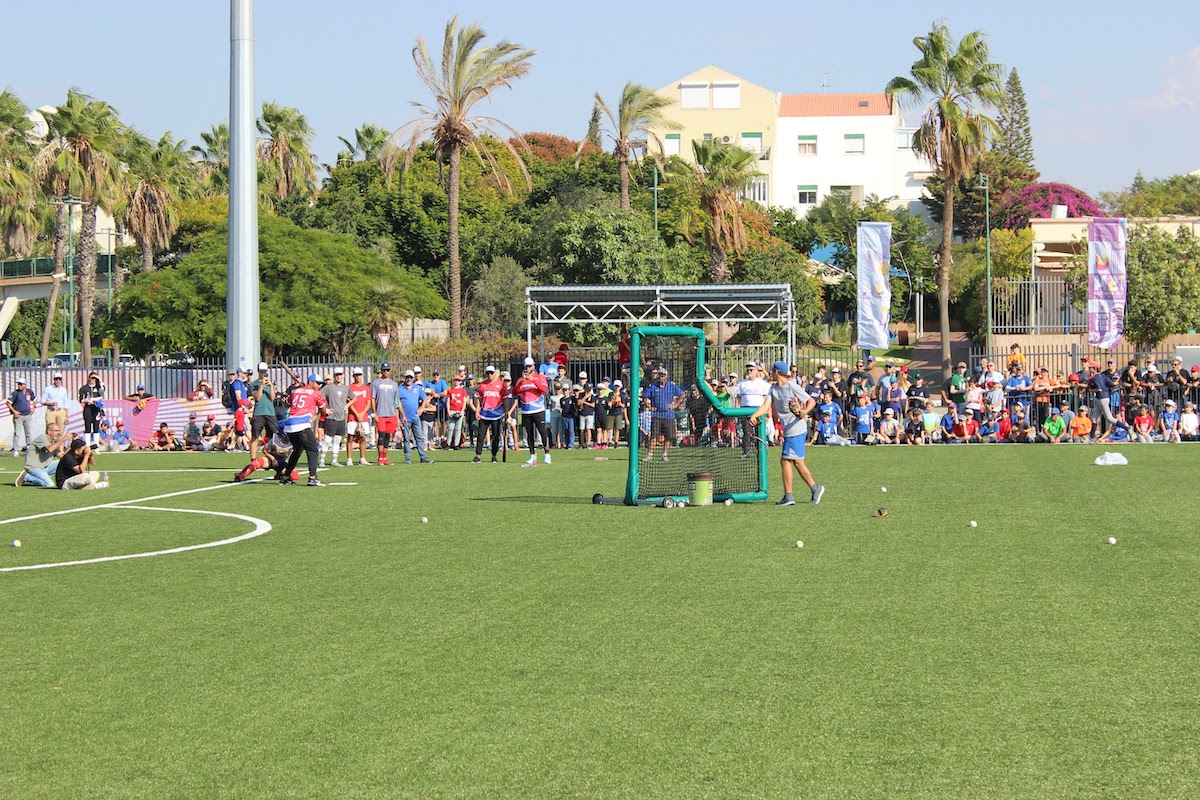 Events such as these inspire confidence in the success of the Israeli baseball program and confirms it has the right connections to help their athletes succeed. And this particular clinic was far more successful than expected.

"We had around 350 kids plus parents. We were expecting around 150,” Miller noted.

This was more than half the IAB's membership, Alter noted.

“It was a reminder for me of how exciting it is for young players to interact with professionals, and will re-energize our organization to continue to put forth programs that will help the growth of baseball in our wonderful home,” Alter said.

After some time training and getting autographs, the IAB players, coaches, and parents gathered along the Third Base Line to watch some All Star Home Run Derby style batting practice.

For a crowd of fully-committed baseball fans who rarely get to watch a live professional game, this was one of the highlights of the day.

“My favorite part of the clinic was watching the players do a home run derby,” Joey Zeff, 16 from Jerusalem, said. “They were having so much fun and so were we.” 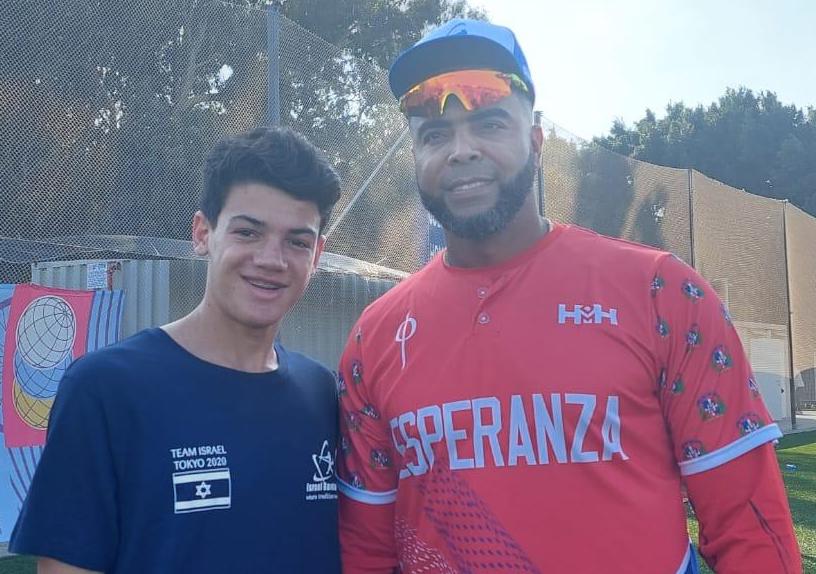 Aviel Mitchell, 12, from Jerusalem said, “It was fun to watch the guys hit.  The energy in the crowd was a big part. We were all really excited.”

Each crack of the bat was met with cheering fans while the IAB Juniors and National team players shagged fly balls in the outfield.

“These are memories the kids will have the rest of their lives,” Miller said.

“Toda raba (many thanks) to Israel Association of Baseball for hosting this event!” Zeff added. “It was a day I’ll remember!” 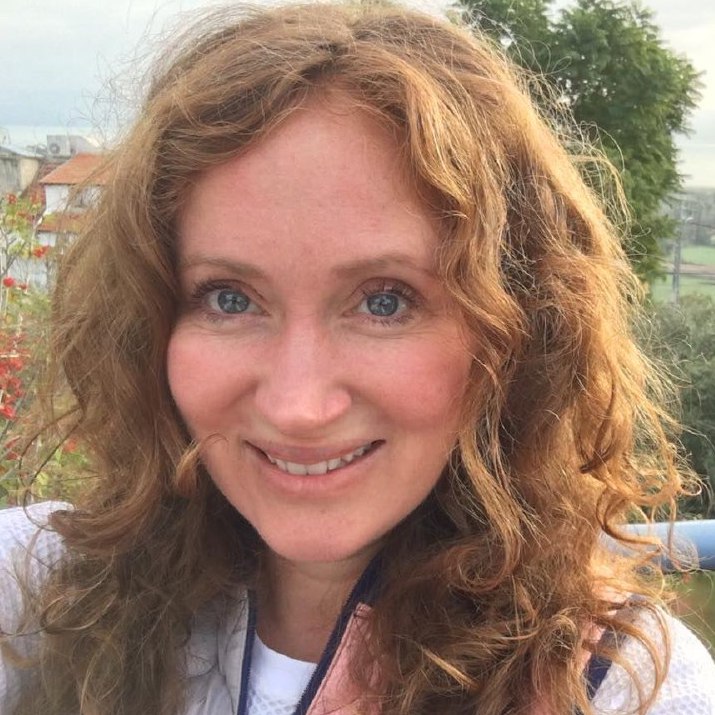 Callie Mitchell is a "Baseball Mom" in Israel. She had the unique experience of being raised in ballparks where father had a career as a player, coach and manager in Major League Baseball. She has a Master of Architecture degree and lives in Jerusalem with her husband and four children.