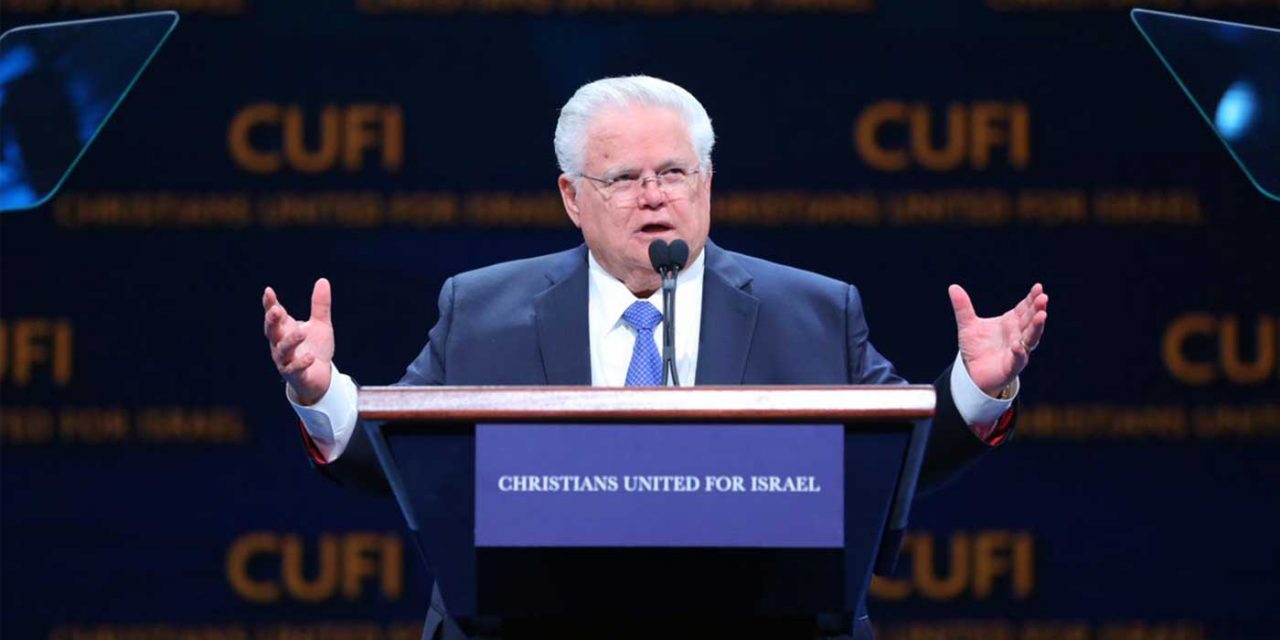 John Hagee, a leading Christian Zionist and the founder of the largest Christian pro-Israel lobby in the United States, has been hospitalized with COVID-19.

Hagee, pastor of a San Antonio megachurch, is 80.

“Pastor John Hagee is in a San Antonio hospital after being admitted with the symptoms of COVID-19. It is a mild case, but he is receiving similar treatments as provided to President (Donald) Trump,” former president of the Christian Broadcasting Network Michael Little told All Israel News.

“The 80-year-old founder of the Christians United for Israel was admitted to the hospital over the weekend out of an abundance of caution and is expected make a full recovery soon,” added Little, who is on the All Israel News board of directors.

Just over two weeks ago, Hagee attended the signing of the Abraham Accords — the historic peace agreements between Israel with the United Arab Emirates and Bahrain — at the White House on Sept. 15. He spoke with All Israel Editor-in-Chief Joel Rosenberg saying that day was “nothing short of a literal miracle.”

“This is a day that people, six months ago, would have said this could not possibly happen,” Hagee told All Israel News on the White House Lawn in this short video. “But because of the efforts of our president and (Israeli Prime Minister) Benjamin Netanyahu, the sons of Abraham are coming together for the first time in thousands of years.”

“His medical team has him under watchful care,” Matt Hagee said. “He’s feeling well enough to be frustrated with everybody in a white coat and a stethoscope.”

“He wanted me to tell you personally that he covets your prayers and that he asks you to pray for him daily, not only that he make a speedy recovery, but that he looks forward to seeing you again here at Cornerstone very soon.”

Hagee had recently given a sermon at Cornerstone Church entitled, “Coronavirus: Dress Rehearsal for the New World Order.”

“The coronavirus crisis has changed America and the world forever,” Hagee said in June. “Who would have thought that some Americans would not be permitted by our government to attend church. Only 10 of you can go — that’s shutting a church of 22,000 down.”

“Man’s law in this coronavirus issues was: ‘Stay at home and save the world. Lock down for two weeks, four weeks, six weeks until I tell you you can go loose,’” Hagee said.

Hagee criticized government rulings that deemed the purchase of alcohol and abortion procedures essential, but simultaneously “shut down the church that teaches six things God hates and one of them is those that shed innocent blood.”

“The objective of every new order is to cast God and His son Jesus Christ from the face of the earth and out of society,” Hagee said in that June sermon.

He warned listeners that to use their freedom to preserve their rights at the risk of losing more freedoms.

In July, Cornerstone Christian Schools successfully sued the county to open for in-person classes in August as scheduled while the county had ordered remote learning would be in place until Sept. 7.