Ingathering of the nations: Record 60,000 Jews move to Israel this Jewish year
Search
November 20, 2022
Current top stories
EXCLUSIVE INTERVIEW
Netanyahu ‘ready’ to attack Iran if Biden doesn’t neutralize threat soon, long-time Netanyahu confidante tells THE ROSENBERG REPORT
commentary
Greed plus woke ideology caused FTX crash from $32 billion to $0
THE WEEK AHEAD: FIFA World Cup kicks off, the new Knesset aspires to limit the Israeli Supreme Court’s authority and the Bank of Israel readies another interest rate
What does the history of slavery have to do with today’s music? Everything, according to one Israeli fifth grade teacher
IDF soldier attacked by Israelis in 'shameful' incident
U.S. archivists find oldest-known star map beneath ancient Christian Syriac manuscript
guest column
Once a Jew, always a Jew!
Looking to shore up alliances against Iran, Azerbaijan to open an embassy in Israel
Iran blamed for bomb-carrying drone targeting Israeli-owned oil tanker off Oman
Ancient Christian monastery – most likely predating Islam – discovered in the United Arab Emirates
guest column
Christians and Jews unite to bless, comfort Holocaust survivors
Historic: Israeli President Isaac Herzog to make first state visit to Bahrain
Investigators find Iranian drones in Russia’s arsenal contain Israeli-made parts
Facing US pressure, Netanyahu reportedly tells Smotrich ‘no’ to Defense portfolio
Israeli fans warned to hide their identity at World Cup in Qatar
Romania issues legislation to protect Jewish ritual slaughter, kosher food
Israeli man with ‘completely reversed’ heart receives correction by cardiologists
Qatar’s treatment of foreign workers comes into focus as soccer World Cup kicks off
Next Israeli Cabinet likely to have just two women compared to nine ministers in previous one
Russia cautiously welcomes Netanyahu’s election victory
VIDEO: Major Leaguers visit Israel in effort to 'hit anti-Semitism out of the park'
As Israel's 25th Knesset sworn in, president urges legislators to be mindful of minorities, balance of power
FBI launches probe into death of Palestinian-American journalist Shireen Abu Akleh
WATCH TBN SPECIAL: What do U.S. midterm election results mean for Israel, the Iranian threat and the 2024 presidential race?
Turkey posts ambassador to Israel after four years
It's official: Netanyahu receives mandate to form a coalition – despite being on trial, president says
UN votes to seek International Court of Justice legal opinion about Israeli ‘occupation’
Six Germans drive 4,500 kilometers to deliver humanitarian gift to Israel
Holocaust survivors warn of rising anti-Semitism on 84th Kristallnacht anniversary
New coalition anxious to reform courts, make aliyah tougher
Holocaust survivor tells her story in Dubai, marking 84 years since Kristallnacht
aliyah
VIDEO: Joel Rosenberg's take on the complicated relationship between the Israelis and Bibi Netanyahu
Social media influencer to millions launches video project on ‘How To: Never Forget’ the Holocaust
ISRAELI ELECTIONS – ANALYSIS
WATCH TBN SPECIAL: How did Netanyahu engineer his historic victory? Can he make peace with Saudis? Will he attack Iran?
The Temple Mount is the place to watch as a new government takes shape
Saliva-based pregnancy test by Israeli startup available next year
TRUMP 2024: ‘This will not be my campaign. This will be our campaign all together’
Security forces in the Republic of Georgia foil Iranian attempt to assassinate an Israeli citizen
Iranian regime reportedly feels encircled by ‘Zionist threats’
Israeli pop star answers Kanye West with Jewish-inspired outfit at MTV music awards
guest opinion
Evangelicals should be the first to care about the environment
Trump needs to 'read the room' and 'exercise humility' if he wants his base to support him in 2024
Human rights NGO says Iran has killed more than 320 civilians, including 43 children, 25 women
guest column
Does small Israel have outsized solutions for global food shortages?
KitePride founders create opportunities, value for victims of sex-trafficking, prostitution
guest opinion
Why the Law of Return must not be changed
Israel, Jordan, UAE replace ‘intent’ with ‘commitment’ to solar energy, desalination exchange
guest column
Why Kanye’s anti-Semitism matters
guest opinion
Should Israel be participating in the world’s climate change agenda?
Tehran residents back Iranian minorities against regime violence, protests being named ‘full-fledged revolution’
Ethiopian Jews arrive in Israel as a part of the government initiative Operation Zur Israel (Photo: Maayan Hoffman)

Israel absorbed 60,000 new immigrants over the past Jewish year 5782 and expects to reach 64,000 by the end of the secular year 2022, the Ministry of Aliyah and Integration reported on Monday ahead of Rosh Hashanah.

That’s more immigrants in one year than any year in the last two decades and close to a 130% increase compared to 2021, when 28,500 Jews immigrated to the country.

“It is amazing to see the rising aliyah figures for 2022 and over recent years,” David Parsons, vice president and senior spokesman for the International Christian Embassy Jerusalem (ICEJ) – which has heavily supported aliyah for the past several decades – told ALL ISRAEL NEWS.

“The global pandemic could not stop the return of the Jewish people to the land of Israel, and neither can the Russian government’s threats to close the door to Jewish immigration to Israel. In fact, it is only stirring more interest in Aliyah from all the former Soviet republics.”

In fact, the highest number of immigrants came to Israel as a result of the Russia-Ukraine war, according to the ICEJ – roughly 40,000 people since February. Forty-seven percent of new immigrants were from Russia and 25% from Ukraine.

Immigrants also came from the United States (6%), France (4%) and Latin American countries (4%), as well as from Ethiopia (2%). Another 12% came from various different countries.

As part of Operation Zur Israel (Rock of Israel), roughly 3,500 Ethiopian immigrants arrived in the country – a number which is supposed to reach 5,000 by the end of 2022.

Zur Israel is the latest government initiative to bring Ethiopian Jews back to Israel, following Operations Moses and Solomon. It is supported by the Jewish Agency through donations made by Jews and Christians throughout the world, including from the United States, Canada, U.K., Singapore, Hong Kong, South Korea and others. 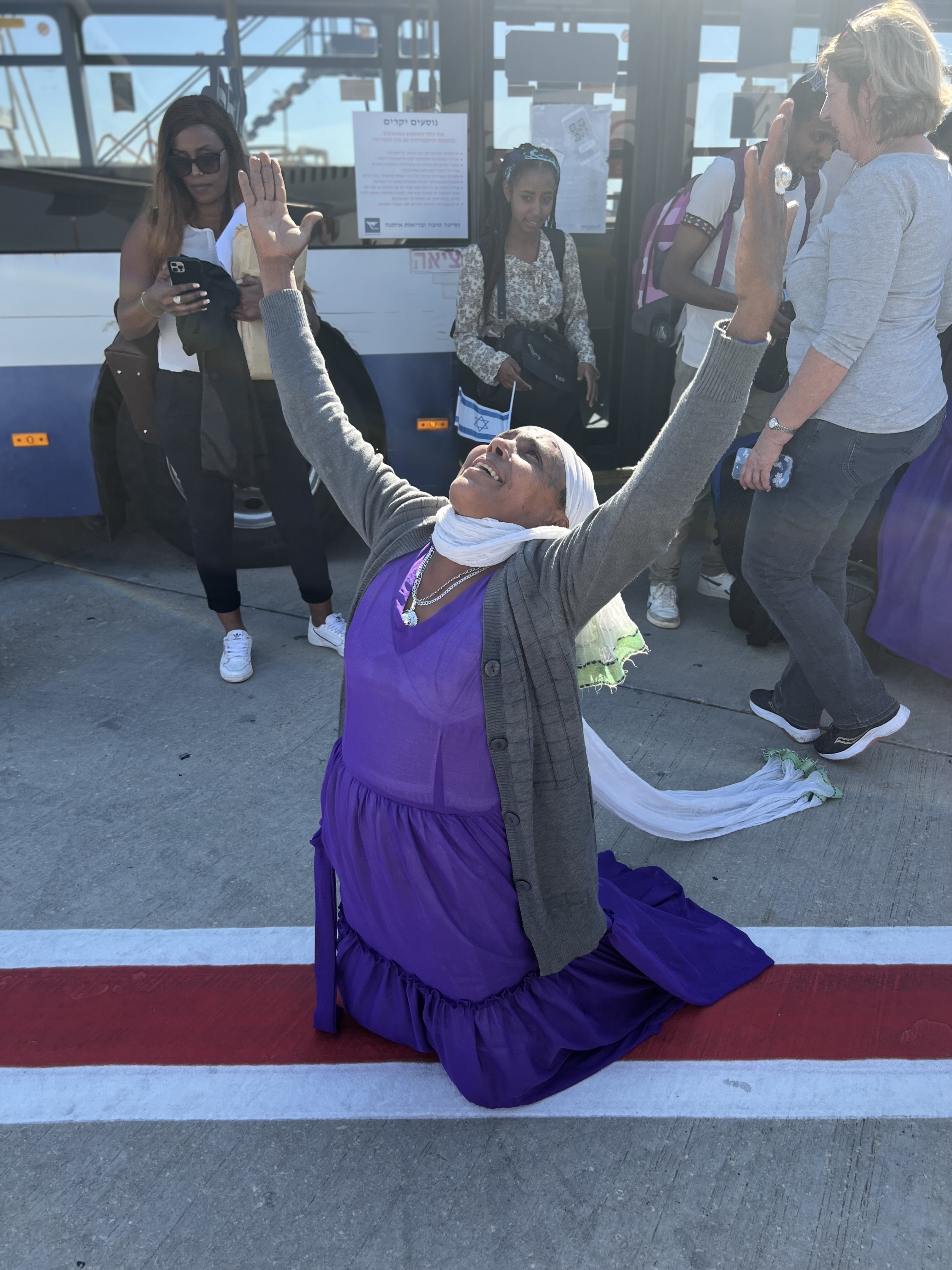 In total, 5,000 Ethiopians have been brought to Israel in the past two years, all of whom have first-degree relatives in Israel, Aliyah and Integration Minister Pnina Tamano-Shata said. But she added that there are “2,000 more immigrants to come from Ethiopia who are first-degree relatives of Israeli citizens, and others who are more distant such as those who are grandparents or grandchildren of Israelis.”

She said that “the Ministry of Aliyah and Integration took upon itself the burden of leading two significant aliyah operations and did so with great dedication and success. I am proud to head a ministry that has proven beyond any doubt that it is capable of leading national missions with great success.”

Tel Aviv took in the highest number of immigrants at 6,327, followed by Haifa with 6,182, Netanya with 6,069 and Jerusalem, which took in 4,300 people. Other popular immigrant destinations included Bat Yam, Ashdod, Rishon Lezion, Nahariya, Ashkelon and Beersheba.

In total, some 323,000 Jews immigrated to Israel in the last decade. 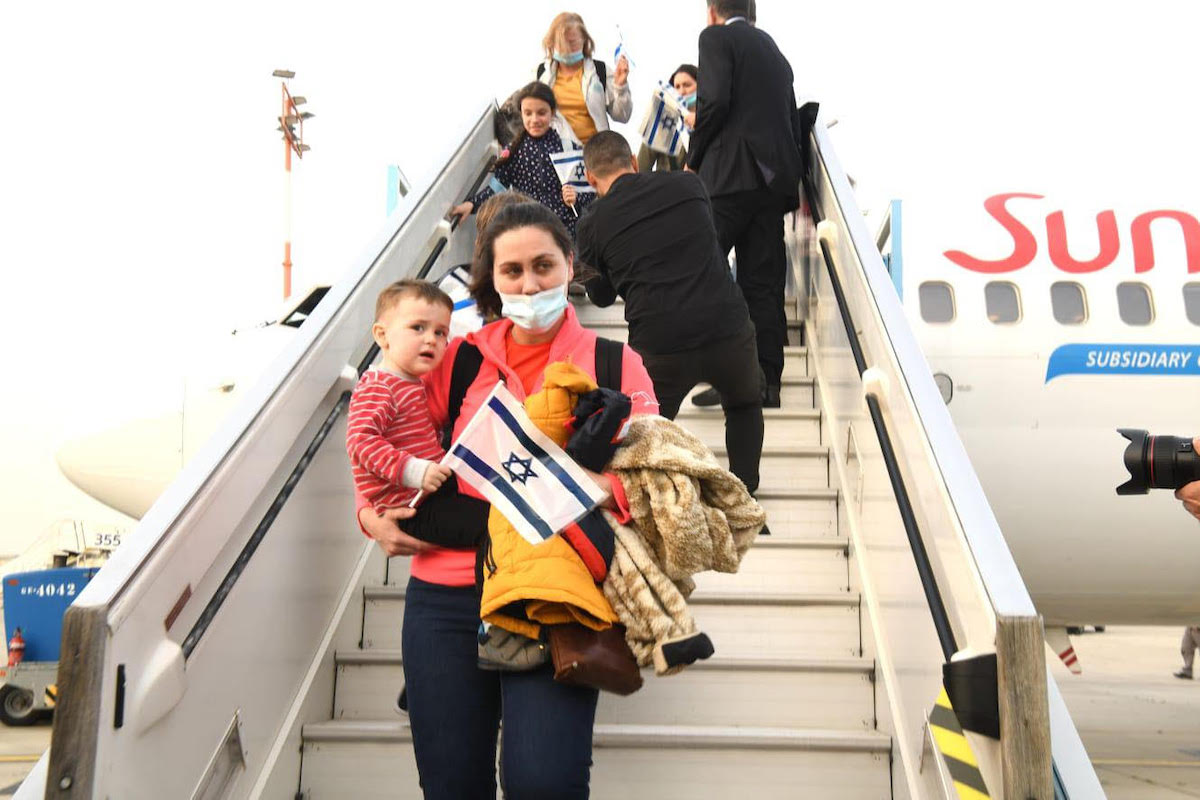 Aliyah – immigration to Israel – is considered the fulfillment of the biblical “ingathering of the exiles” from the four corners of the earth, which is spoken about in the books of Isaiah and Jeremiah.

For example, Isaiah 11:12 says, “He will raise a banner for the nations and gather the exiles of Israel; He will assemble the scattered people of Judah from the four corners of the earth.”

Jeremiah 30 states, “The days are coming, declares the Lord, ‘when I will bring my people Israel and Judah back from captivity and restore them to the land, I gave their forefathers to possess.”

While Jews have lived in Israel for centuries, including after the destruction of the Temple and the Jewish exile in 70 A.D., there have been large waves of aliyah beginning in the late 18th and early 19th century. Some of the most significant waves occurred during and immediately following the Holocaust between 1939 and the founding of the State of Israel in 1948, when around 700,000 Jews immigrated to the fledgling state, the majority from Europe. 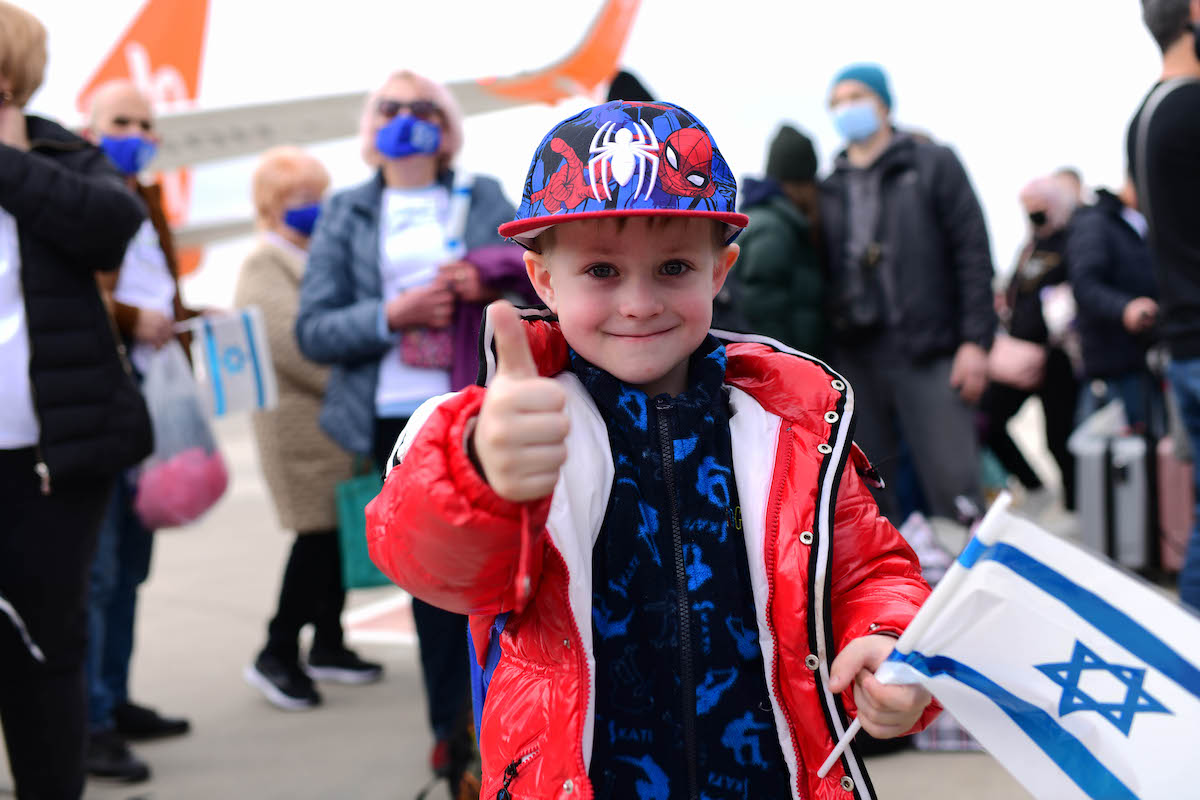 On one hand, increasing aliyah poses a challenge to the State of Israel, which need to provide a safe haven and services to support the integration and absorption of new immigrants, many of whom do not know the language. On the other hand, the ministry said, it infuses the country with new talent.

The ministry on Monday said it planned to open five new absorption centers to house new immigrants from Ethiopia, whose lifestyles are vastly different from Israelis. The government earmarked more than $160 million for the absorption of Zur Israel immigrants.

On Monday, the ministry accused Sderot Mayor Alon Davidi of racism for being “strongly opposed to the opening of the absorption center” for Ethiopian immigrants – a center that “is supposed to be operated by the Jewish Agency, where he serves as a member of the board of trustees,” Ministry Director-General Dganit Sankar-Langa said.

“I had a conversation with Mayor Davidi who said … that he is not interested in accepting immigrants from Ethiopia in his city and will not allow it,” according to Sankar-Langa.

Tamano-Shata was quoted as accusing the mayor of “pure racism” during a press conference on aliyah on Monday. She said, “This is racism. It is very sad and it should not be the face of Sderot. Being on the border with Gaza does not allow you to be racist.”

The municipality pushed back in a statement stating that the reason for refusing to build the absorption center was not racist but practical, in that the building in which the Jewish Agency hoped to house the center received a permit to build sheltered housing and the planning authority does not allow it to be turned into an absorption center.

“Any other claim made here is tantamount to libel,” the Sderot Municipality said.

It added that the city opened a cultural center for Ethiopian immigrants with the municipality's funds earlier this year. 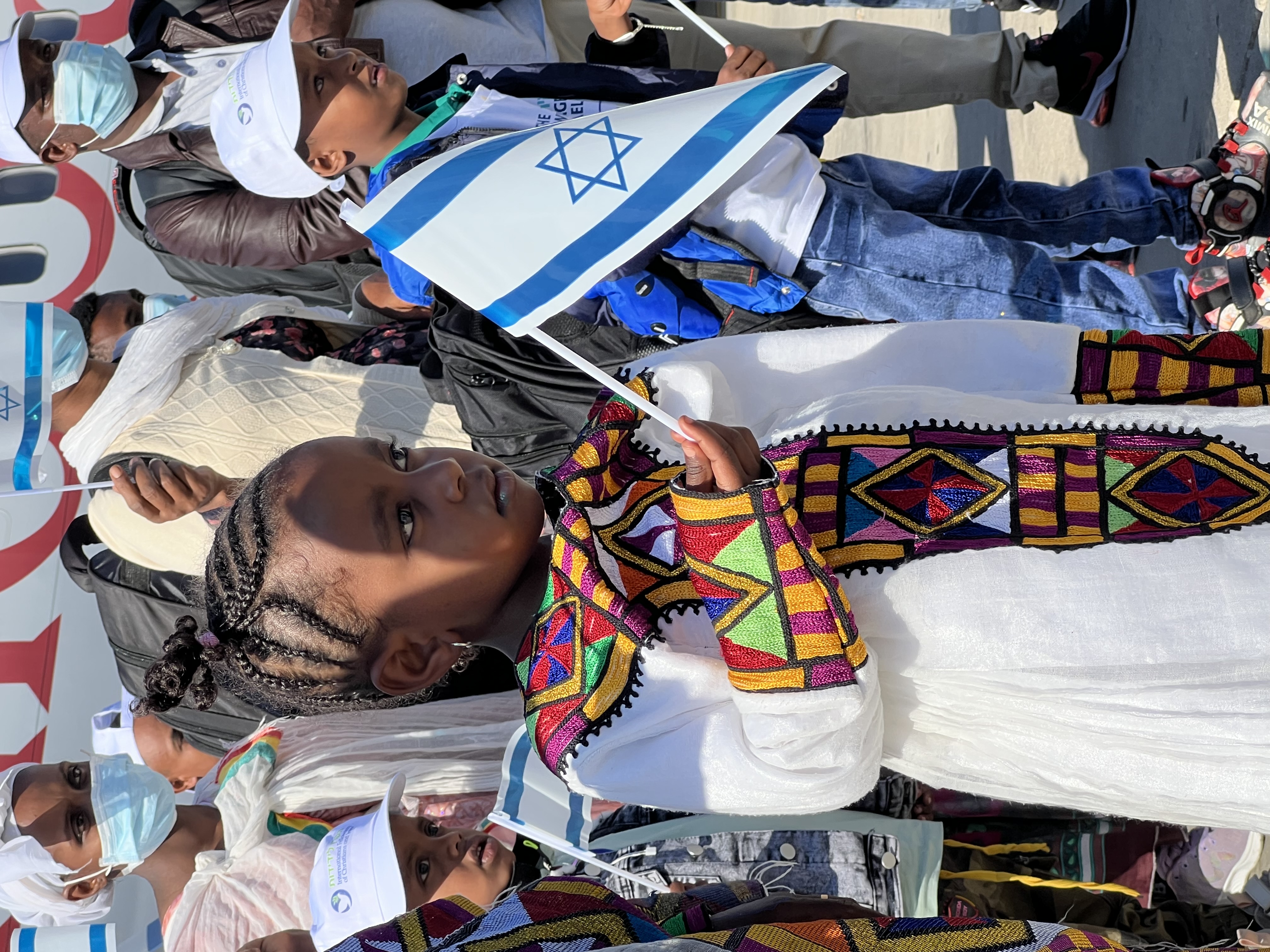