The annual Global Day of Prayer for the Peace of Jerusalem (DPPJ), organized by Eagles' Wings, kicked off the day Sunday welcoming 500 million believers from 175 nations who pledged to participate in prayer for Israel.

DPPJ has become the largest Israel-focused prayer event in history, according to the organizers. Eagles’ Wings Founders Robert Stearns and Pastor Jack Hayford led the prayer event for “sustained fervent, informed global intercession for the plans and purposes of God for Jerusalem and all her people” in keeping with the command in Psalm 122:6 and Isaiah 62 to pray for the peace of Jerusalem.

Hayford and Stearns have hosted the Day of Prayer on the first Sunday of every October for nearly 20 years now. The group's mandate to set aside one day each year to raise global awareness and intercession for God’ purposes in Israel, especially at this critical juncture in history.

This year, “WE ARE PRAYING” was launched at 2 p.m. in Israel on Facebook, 7 a.m. EDT with leaders from all over the world pledging to pray for the land and its people. Among those highlighted in the video were Kathy Lee Gifford and Gordon Robertson, CEO of the Christian Broadcasting Network. Throughout the day, videos and posts were made available on social media, including Instagram, to encourage Christians around the world to pray.

Prior to the COVID global pandemic, Stearns and Hayford hosted the prayer meeting each year at the Haas Promenade in Jerusalem. Last year, the gathering was streamed virtually and broadcast on God TV. 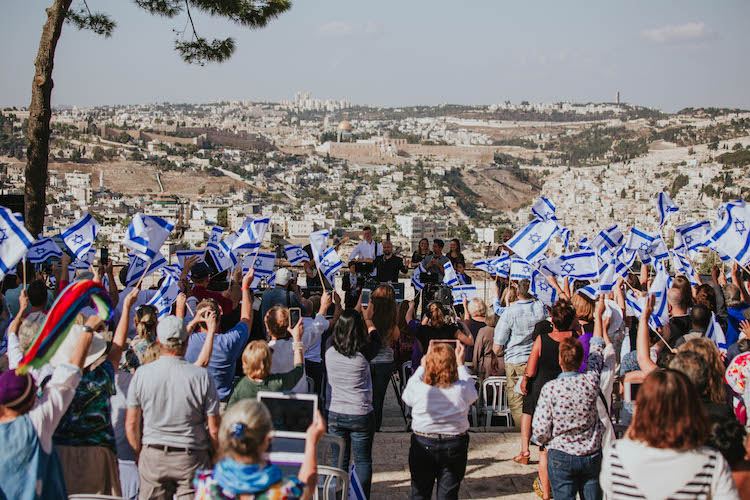 The Day of Prayer for the Peace of Jerusalem, 2017 (Photo: Wikimedia Commons)

“Even though we cannot physically be in Jerusalem this year, our hearts are always in Jerusalem,” Stearns said at the time. “Prayer knows no boundaries or time restraint. All around the world, nations are tuning in together, united in prayer, to pray for the peace of Jerusalem.”

The DPPJ first began in 2002 in a meeting with leading political and religious leaders from Israel and the United States. It has since become the largest prayer movement of its kind, with over 1,400 key leaders within the Evangelical Christian world actively supporting Israel in prayer.

According to the DPPJ website, the pledge for prayer is meant “to unite believers around the world in raising a cry to Heaven on behalf of this troubled, but strategic land and its people. We believe in God's promises for His beloved nation and fervently pray to hasten the day when He brings fulfillment to His word.”

In his article, “Why Stand with Israel Today?” Hayford writes, “Israel is a land about which G-d says - uniquely, prophetically, redemptively, and repeatedly in the Bible –‘This is Mine.’ G-d refers to Israel as He does to no other land on Earth. Israel was raised up to be a light to the Gentiles.”

Underground churches in countries such as China, Pakistan, the United Arab Emirates and Indonesia, the largest Muslim nation in the world, were also praying for the peace of Jerusalem.

Eagles’ Wings is a New York-based non-profit, evangelical ministry. Go to the DPPJ page to take part next year or to learn more.