Tomorrow we celebrate the birthday of the late Coretta Scott King, one of the most influential and transformative leaders in 20th-century U.S. and world history.

When King died in 2006, flags flew at half-mast and her body laid in honor at the Georgia State Capitol in Atlanta – a far cry from what would have been 38 years prior.

But what many may not know is that King was not simply an accessory of her husband, Dr. Martin Luther King Jr. Her own activism complemented and, at times, led Martin’s politics. The memorialization of her life, as wife and helpmate, and her lifelong political commitments, misses the wider critique of social injustice that underlay her life’s work.

While she was praised as being kind and gentle, obedient and beautiful, and was defined principally as her husband’s “help meet,” King was an influential peacemaker and social justice activist for her entire life.

And many people are unaware of the King’s love for Israel – something that inspires my work in the Holy Land today.

CORETTA KING’S IMPACT ON SOCIETY – AND ON ME

King’s life is a great example of faith in action. She carried on the efforts of her husband to bring America together, not knowing whether her struggle would succeed, but sure that it was too important not to try. Her exemplary leadership was carried out with integrity, courage and wisdom.

During the mid-to-late 1950s, King performed concerts and recitals throughout the South. She also conceived and organized a series of Freedom Concerts to raise funds to benefit the Southern Christian Leadership Conference (SCLC). These concerts combined poetry, narration and music to tell the story of the Civil Rights Movement.

From the time of her husband's assassination in 1968, King devoted much of her energy to building and developing programs for the Atlanta-based Martin Luther King, Jr. Center for Nonviolent Social Change. She was one of the most influential American leaders of our time and received honorary doctorates from more than 60 colleges and universities.

She campaigned hard for her husband’s birthday to be made a national holiday. After 14 years of lobbying, she finally succeeded when President Ronald Reagan signed the 1983 bill establishing Dr. Martin Luther King, Jr. Day as a federal holiday.

She also solidified her husband’s connection to Israel. King wrote a message to the Knesset (parliament) acknowledging the actions taken by the Jewish state to commemorate her husband.

“On April 3, 1968, just before he was killed, Martin delivered his last public address. In it, he spoke of the visit he and I made to Israel. Moreover, he spoke to us about his vision of the Promised Land, a land of justice and equality, brotherhood and peace. Martin dedicated his life to the goals of peace and unity among all peoples, and perhaps nowhere in the world is there a greater appreciation of the desirability and necessity of peace than in Israel.”

Before she married Martin, she was a political activist and organizer in the Black Freedom Movement, the campaign to abolish nuclear weapons and the global peace movement. She became a national and global leader of nonviolence and racial justice after his assassination.

Understanding the tremendous work to be done in the wake of her husband’s assassination, she committed to carrying on the fight for racial and economic justice. While her husband had kept a distance from welfare rights, King linked the struggle for economic justice to the need for a real safety net for poor families. In the months leading up to his assassination, Martin's final focus was on poverty and economic injustice.

Sherry Frank, executive director of the Atlanta office of the American Jewish Committee (AJC) and member of the National Council of Jewish Women quoted King: “In 1984 when my community was responding to Minister Louis Farrakhan’s vile statements calling Judaism a gutter religion and Israel an outlaw state, Mrs. King joined the Black-Jewish Coalition press conference and denounced these statements.”

She was a consistent and strong voice against all forms of bigotry and prejudice. Her warmth and commitment to peace and understanding was unwavering. At critical moments, she stood up for Israel and joined the AJC efforts to urge the United Nations to treat Israel more fairly.

It was actually the Kings' love for Israel that inspires our work in the Holy Land now.

I am honored that my husband, Bishop Glenn Plummer, and I have been assigned by our church to show our support for Israel and to be intricate bridge builders as a result of the prophecy given by Dr. Martin Luther King Jr. at our church in his last famous speech, “I've Been to the Mountaintop.”

Our vision is to build a bridge – not just for the Church of God in Christ (COGIC) – but also for Black America. We feel that it is vitally important that African Americans have a relationship with Israel. I feel it’s important for our people to understand Israel – the culture, the country, the people, the land of Israel, the God of Abraham, Isaac and Jacob.

We take inspiration from the God of Israel and the story of the Israelites’ freedom which has not only been a source of hope for the Jewish people, but for African Americans who faced slavery in America and for oppressed people everywhere.

For many slaves, the conversion to Christianity was directly related to identifying with the enslavement and freeing of the Hebrew people.

Might this same God have the power to free me and my people?

This question led many to look to the Bible as a source for both hope and comfort, and to the traditions of Christianity to form both coping mechanisms and methods for retaliation against slavery.

My love for Israel goes back to my childhood. Born in 1965, just after the end of the Jim Crow laws, I was raised in a small town in northern Louisiana. I was born into a Christian home raised by my grandparents and my father, primarily my grandmother.

I remember when my grandmother, Mary, bought us a set of encyclopedia Bible stories "full of animated pictures and all the stories of the Hebrew people from beginning to end” from a traveling salesman.

She used the last of her money to purchase those books and from that day, my grandmother would have us read one of those stories every day – and this shaped me into who I am as an adult. The stories gave me love and admiration for a land and people that I did not know. Those stories revealed a faithful, loving and merciful God that shaped my person and directed my future.

King was an uncompromising leader who possessed confidence, elegance and unique strength and was a true role model for all women.

I will continue to be a keeper of the dream of both the Kings' and to witness the pilgrimage of many African Americans as they journey to the Promised Land. 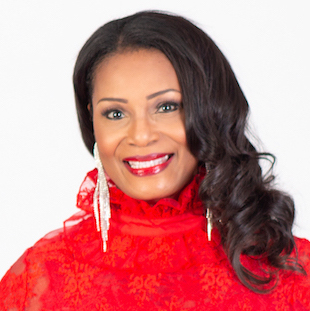