JERUSALEM – Most Christians around the world are not paying attention.

But today was one of high political drama here in Israel.

Hoping to head off the threat of a fifth round of elections, Israeli President Reuven Rivlin on Wednesday morning asked the leaders of every political party in the Knesset for their written recommendation of whom they would back to be the next prime minister.

Naftali Bennett – whose Yamina (“Rightward”) party has 7 seats – recommended himself.

That said, Lapid and Bennett have been negotiating behind the scenes for weeks.

Lapid has offered Naftali Bennett to form a political alliance and serve in a rotation with him as the nation’s premier – even to go first.

That is, Bennett would serve as prime minister for the first two years.

During this time, Lapid would serve as foreign minister.

Afterwards, they would switch roles.

Bennett appears to be ready, potentially giving Lapid 63 seats – but the devil remains in the details.

Today I asked a senior political official at the heart of the negotiations whether the deal between Lapid and Bennett was done.

“This is the time to stop and reconsider a new path,” Bennett told reporters Wednesday evening. “Whoever cynically takes the State of Israel to fifth elections based on personal interests, in complete opposition to the needs of the nation and state, the people won’t forgive him. This is the time for a unity government.” 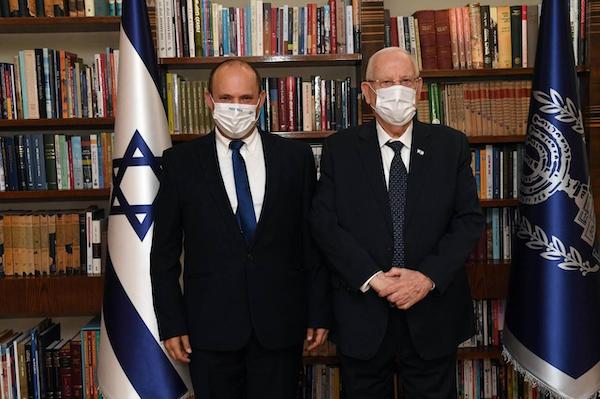 Rivlin officially announced his decision this evening that he is giving Lapid the mandate to form the next government.

This alone is a huge accomplishment for Lapid, who founded and leads the centrist party known as Yesh Atid (“There Is A Future.”)

It is also a dramatic moment that will test Lapid’s skills as a political negotiator.

Can he seal the deal with Bennett and create a 63-seat majority government?

Does he want to – and can he – also woo another Arab party known as Ra’am, led by Mansour Abbas, to bring his 4 seats into such a government?

That would create a 67-seat majority?

That would also be a game-changing moment in Israeli political history, since no Arab party has ever joined the government.

This leads to a different, but perhaps, more urgent question.

If the Arab members of the Knesset will not formally join the government, can Lapid persuade them to let him create what is known as a “minority government”?

In this case, Lapid would not have 61 members actively backing him, but would have to persuade at least five Knesset members not to actively oppose him when the official vote is taken on who will be prime minister.

Israelis have not seen anyone other than current Prime Minister Benjamin “Bibi” Netanyahu form a government in 12 years.

There is, understandably, a considerable degree of skepticism as to whether Lapid can get it done.

If he does not, Israel will go to a fifth round of elections.

But Lapid is counting on Israelis’ electoral exhaustion – even anger – to persuade small and disparate parties with significant ideological differences to back him.

He is also being quite creative – and some would say generous – in trying to stitch together a working coalition.

Significantly, Lapid today persuaded several parties who did not back him last month to recommend him to be prime minister.

Right-wing politician Gideon Sa’ar and his 6-seat New Hope party, for example, backed Lapid in his letter to President Rivlin.

Remarkably, five of the six members of the Arab Joint List party backed Lapid as well.