Below is a short excerpt from the book "Abraham Had Two Sons: What Did Go Wrong? : God's plan for Isaac and Ishmael."

Then they lifted their eyes and looked, and there was a company of Ishmaelites, coming from Gilead with their camels, bearing spices, balm, and myrrh… So the brothers pulled Joseph up and lifted him out of the pit, and sold him to the Ishmaelites for twenty shekels of silver. And they took Joseph to Egypt.

Let us read this Scripture in the context of the Isaac-Ishmael story. The brothers are Isaac's grandsons and Abraham's great-grandsons – but already, only two generations after Isaac, in the descendants of Ishmael that happened to pass by, they see complete strangers: they identify them as "Ishmaelites" in the same matter-of-fact, detached way that they would recognize any other tribe or nationality: as foreigners and strangers who had nothing to do with them. In the lifespan of two generations, Isaac's and Ishmael's families have become completely estranged from one another!

This is the first – the discouraging – lesson of this Scripture. How can we expect any feelings of kinship or family between us today if already back then, two generations after the time when Isaac and Ishmael were part of the same family, their descendants were absolute strangers to each other? Obviously, this huge gap between Isaac's and Ishmael's descendants goes all the way back to the very moment Ishmael was banished from the family. If we want this gap to be filled, if we want this fracture to be healed, evidently, we have to start from the very beginning and go all the way back.

However, there is the encouraging lesson as well that we can learn from this story. We all know that it was God's plan from the beginning to take Joseph – and then all Israel – to Egypt. Only now, however, have I realized that this plan would not have been fulfilled if those Ishmaelites had not "happened" to pass by.

Now Joseph had been taken down to Egypt. And Potiphar, an officer of Pharaoh, captain of the guard, an Egyptian, bought him from the Ishmaelites who had taken him down there. The Lord was with Joseph.

Was it just an accident that those Ishmaelites “happened” to pass by? There are no accidents in the Word of God: If it says that Ishmaelites brought Joseph to Egypt, then it was important to the Lord that they were there, and that we know about it. Joseph had to get to Egypt – it was God's plan to begin with – but this plan was implemented through the Ishmaelites. Can you imagine? The Exodus –the most magnificent, the most significant, the most defining event of Israel's history – would not have happened were it not for the Ishmaelites. The paths of Isaac and Ishmael are intertwined:  Ishmael's descendants have a part in carrying out God's plan for my people, for Isaac's descendants. In order to come into the fullness of our destiny, in order to arrive at the place that God intended for us from the beginning, we need the help and involvement of "Ishmaelites."

You might object that we cannot draw such far-reaching conclusions based on just a few verses.  However, this is, in fact, the very same conclusion that we have arrived at in every part of this book and on every level that God has been guiding us through, whether in Peshat, Remez, Derash, or Sod. Abraham had two sons, and they both belong in Abraham's family and in God's plan. Neither can be excluded, whether from the family or from the plan. They are both essential. Both sons have a part to play in Abraham's family and in God's plan. Certainly, it's not the same part; as we saw earlier, the sons were very different and their destinies were very different, as well. We know by now that the fact that Abraham had two sons, a natural one and a supernatural one, was a prophetic picture of God having two sons as well: the natural son and the supernatural son. I have already written a book seeking to restore the place of God's natural son, Israel, in His plan. Possibly, through this current book, the Lord is seeking to restore the place of Abraham's natural son: Ishmael.

Of course, I am well aware of the fact that many Arab people do not see themselves as Ishmael's descendants. However, I strongly believe that there is a biblical basis and a spiritual reality beyond our complicated visible reality. We have to learn to recognize this biblically based, spiritual reality in the everyday lives of these two different peoples who are incredibly close and incredibly hostile at the same time. Definitely, real life is much more complicated and multi-faceted than a biblical story, but isn't that always the case? A person is much more complicated and unique than his or her X-ray: You don’t see any personal features on an X-ray; you can't recognize the specific individual there – yet, an X-ray is definitely needed in order to see what must be healed: to see where the fracture is and what should be done to heal it. I do believe that through this book, through these four levels that the Lord has guided us through, He has given us a clear spiritual X-ray of our incredibly complicated situation. We need to make sure that we see the spiritual reality beyond our everyday lives. He wants us to see the invisible through the visible, and for this purpose, He wants us to see this biblical X-ray.

Abraham had two sons – and the family picture will not be complete until they both are there! Everything that the Lord has revealed to me on these pages, He has revealed for one purpose only: to heal! To heal that torturous fracture that started almost 4,000 years ago and has been bleeding and oozing endless pain ever since. There is much suffering on both Isaac's and Ishmael's sides. He wants to restore the broken relationship and make the family whole.

Moreover, I truly believe that it is our task to restore Ishmael's place in God's plan. As Messianic believers, those standing between Christianity and Judaism, I believe we are to restore the lost son to the family picture. Then, and only then, will this picture become complete. This is my hope, and this is my prayer: “Not by might nor by power, but by my Spirit," says the LORD of hosts. 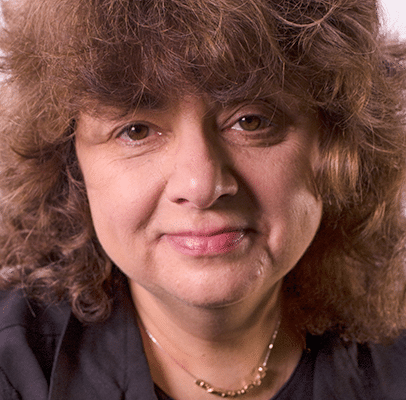 Julia Blum is a teacher and writer working for Israel Institute of Biblical Studies, as well an independent writer and lecturer. She regularly speaks at international Christian and Messianic conferences and writes Bible commentaries for different websites.