JERUSALEM — When tourists come back to the Holy Land they will soon be able to catch a glimpse into a never-before-seen ancient and comprehensively Christian collection that will set it apart from all museums in the city, if not the world.

The upcoming section of the Terra Sancta Museum will also provide a perspective of Jerusalem that has been missing from the Holy City’s cultural scene: the Christian one.

“As we are three communities in Jerusalem, it is also important that there are three museums, one for each community,” said Father Stéphane Milovitch, referring to the city's “beautiful” Israel Museum, which showcases Judaica from around the world, and the Museum for Islamic Art.

“Usually people come to see the shrines, to pray in the shrines,” Milovitch told reporters during an exclusive tour of the site. “But in the 21st century we think it is important to welcome the people also in a cultural way, not only for liturgy and prayer.”

A sharp left turn upon entering the Old City’s New Gate brings you into the headquarters of the Custody of the Holy Land, where few knew a cornucopia of centuries-old treasures – from religious icons to royal gifts – had been amassed over the years.

The Custody said the time is ripe to display these to the world.

“Jerusalem is the center of the world for us Christians and even for the Jews. All the countries are satellites from the center place and so they send gifts,” Milovitch explained. “Now we are ready to show them to the public." 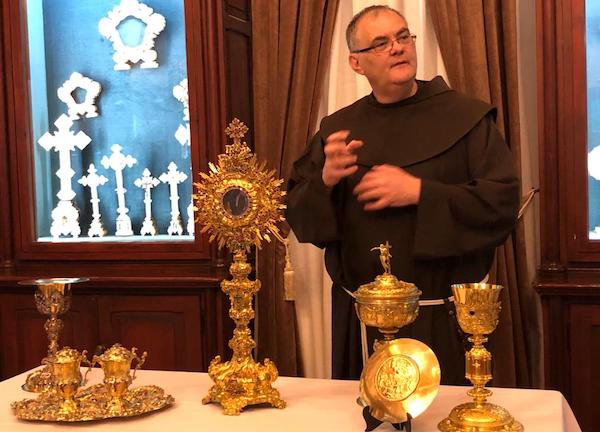 Father Stéphane Milovitch shows reporters some of the items that will be displayed at the Terra Sancta Museum in Jerusalem. (Photo: All Israel News)

During a tour, organized by the Israeli Tourism Ministry for journalists from various media outlets, ALL ISRAEL NEWS got a sneak preview of the facility and some of the stunning pieces that will be on display.

Indeed, the latest section of the Terra Sancta Museum – being built under the St. Savior Church in a 16th-century Georgian monastery – will become a destination for history lovers as well as Christians. (A multimedia and an archaeological section have been partially opened and are located in the Monastery of the Flagellation, on the Via Dolorosa, a 5- to 10-minute walk from the church.)

The museum’s collection is comprised of priceless gifts sent as homage by royals who could not physically leave their thrones to make their own pilgrimage to the Holy Land.

Some of the gifts are from kings Louis XIII, Louis XIV and Louis XV – plus the very vestments worn by Napoleon at his wedding.

“There is nothing equivalent, even in France,” Milovitch said.

“Everything that will be presented in the museum we didn’t buy, we already had here,” he continued. “It’s funny to think you need to come to Jerusalem to see the original textiles of Versailles.” 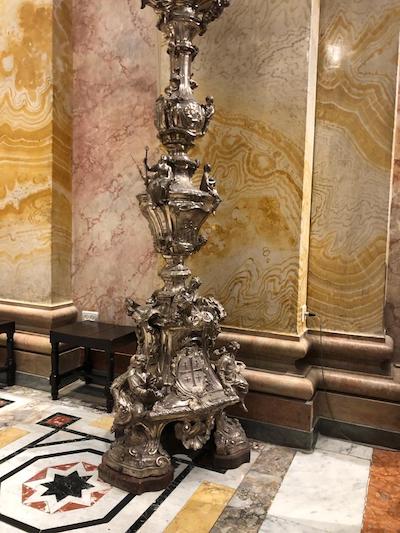 18th-century candlestick from Venice at St. Savior's Church in the Old City of Jerusalem. (Photo: All Israel News)

Another amazing feature, a music room, will house what could be the world’s oldest known organ – a 12th-century specimen from the Crusader period, unearthed in 1906 in Bethlehem. Milovitch said a facsimile will recreate music so guests can hear how churchgoers worshipped during that period.

The Custody of the Holy Land is run by the Franciscans who have had a presence in Jerusalem since the early 1200s. In 1342, a papal order made the Franciscan Order the official stewards of the holy places on behalf of the Catholic Church. The priests were charged with preserving the shrines and also the Christian community – which has dwindled over the ages – through peaceful means as opposed to the warring Crusaders.

Though by no means the only or longest-running Christian representation in the city, the Custody has endured centuries of conflicts and various rulers during the era of the Mamluks, the Ottomans, the British Mandate and the State of Israel.

The museum will tell the historic and often untold story of the Christian presence in Jerusalem and will dedicate space to other local denominations that choose to participate, including the Greek and Armenian Orthodox churches.

“We will show the Resurrection from different witnesses, denominations,” Milovitch said. “We have one faith in the risen Christ, but we have different cultural tongues and mentalities. So it seems to be in conflict, but we are different sides of the same diamond.”

Vincenzo Zuppardo, the architect in charge of the site, said the building process has been a balance between preservation and progress. It has also seen fits and starts depending on donations, which took a hit during the COVID pandemic. But with recent financial support from Hungary, Zuppardo said the work on the 1,200 square meters of exhibition area was picking up again this spring.

All tourism came to a halt over the past 14 months due to COVID-related travel restrictions. That came after a record year of 4.5 million tourists in 2019 – of which Christians made up more than half, according to Israeli Tourism Ministry figures.

The first tourists since March 2020 will start coming through the borders on May 23, a welcome sight for the tourism sector. While the museum will not be completed yet, visitors who are interested can visit St. Savior’s Church which sits above the future museum and view its ornate and unique architecture, including towering silver candlesticks from 18th-century Venice.

The church was built in 1885 and is the home parish of local Catholics, mostly Arab Christians born in Jerusalem.

Ironically, the Custody headquarters is situated at New Gate and, as Milovitch notes, they would not have known when they chose the location that the Christian facility would become a crossroads between East and West in modern Jerusalem: Muslim and Jewish.