Four new inscriptions that point to evidence of early Christianity in the land were discovered this summer during an excavation in the Greco-Roman city of Hippos (Sussita) of the Decapolis, located above the Sea of Galilee.

The inscriptions were found while cleaning a set of Byzantine mosaics in one of the ancient churches – the Martyrion of Theodoros – commonly referred to as the “Burnt Church,” due to the church being burned down before the Islamic era, according to Director of Excavation Michael Eisenberg from the Zinman Institute of Archaeology at the University of Haifa.

The inscriptions shed “rare personal light on actual people,” according to Arleta Kowalewska, excavation director at the Zinman Institute

Two of the four inscriptions were revealed while archaeologists began removing dirt and soot from the mosaics, when they saw colors and images begin to appear.

“Suddenly, two concentric black lines appeared in front of the main portal of the church. We realized there must be an inscription here,” according to field supervisor, Jessica Rentz.

One of the inscriptions found on the chapel reads, in Greek: “Offering in favor of salvation and succor for Urania and Theodoros. Lord God, accept! Amen! In the time of indiction 4 and year 619.”

According to an interpretation by Prof. Gregor Staab, an epigraphist from the Institute of Classical Studies at University of Cologne in Germany, these two individuals – Urania and Theodoros – established some sort of private chapel as a final resting place for themselves in an adjoining room. 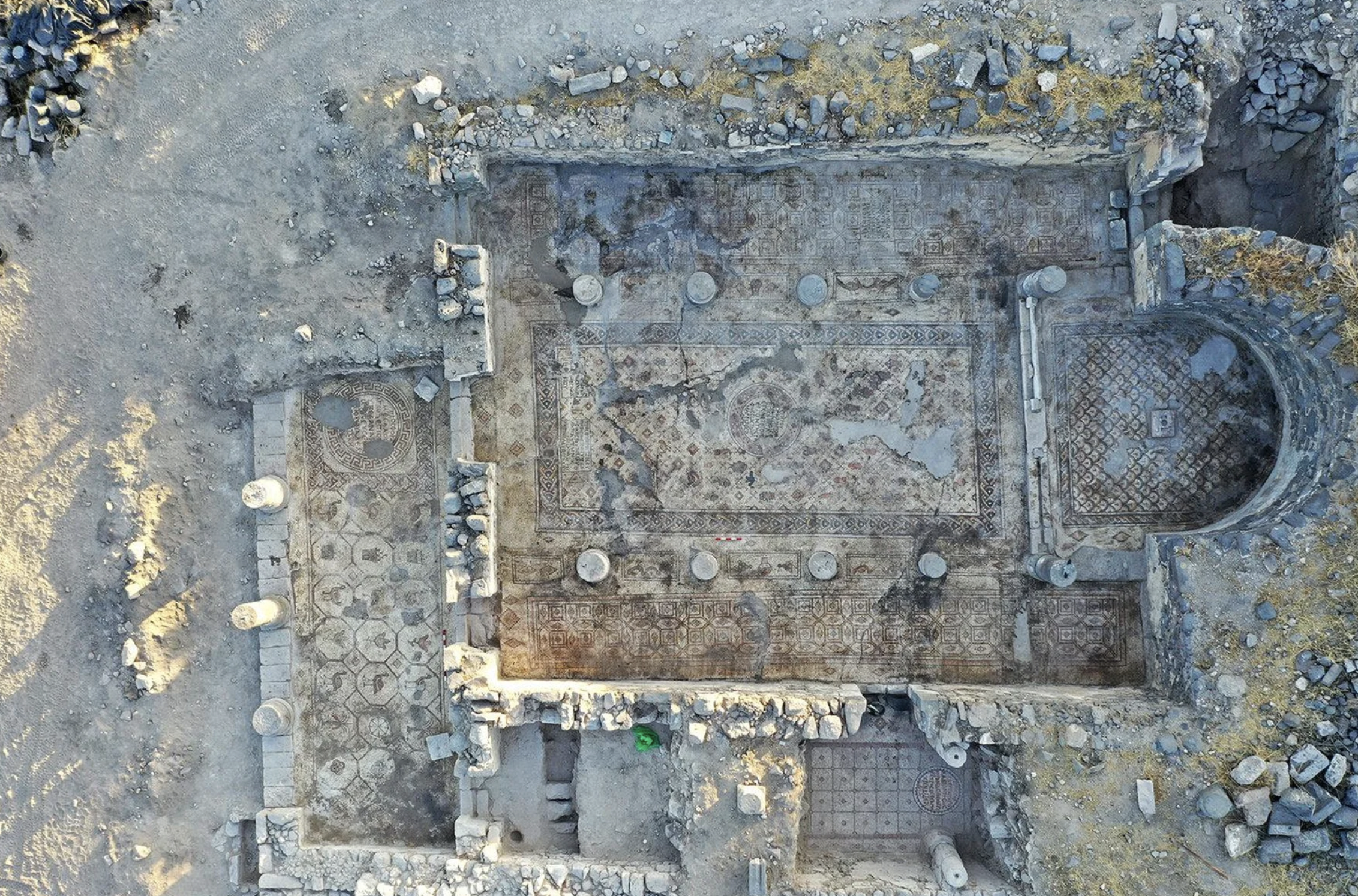 The Martyrion of Theodoros at the end of the 2022 excavation season. (Photo: Michael Eisenberg)

At the entrance hall of the church, Staab explained, archaeologists identified another inscription (damaged but legible) which read, “Offering of Megas, the most holy bishop, for the peaceful rest of Eusebiοs and Iobiοs, his brothers, in the year 620, indiction 4.”

Staab explained that this is the first time the names of people who lived in the city were revealed, giving insight into the lives of these early Christians.

Another recently-discovered mosaic translated by Staab read: “Offering of the priest Symeonios, goldsmith, custodian [?], He [the Lord] will protect him and his children and his wife.”

All coins and the other artifacts discovered predate the Islamic period, according to Eisenberg, which supports a theory that the church was destroyed by fire during the Persian Sasanian conquest of Jerusalem in 614 A.D. 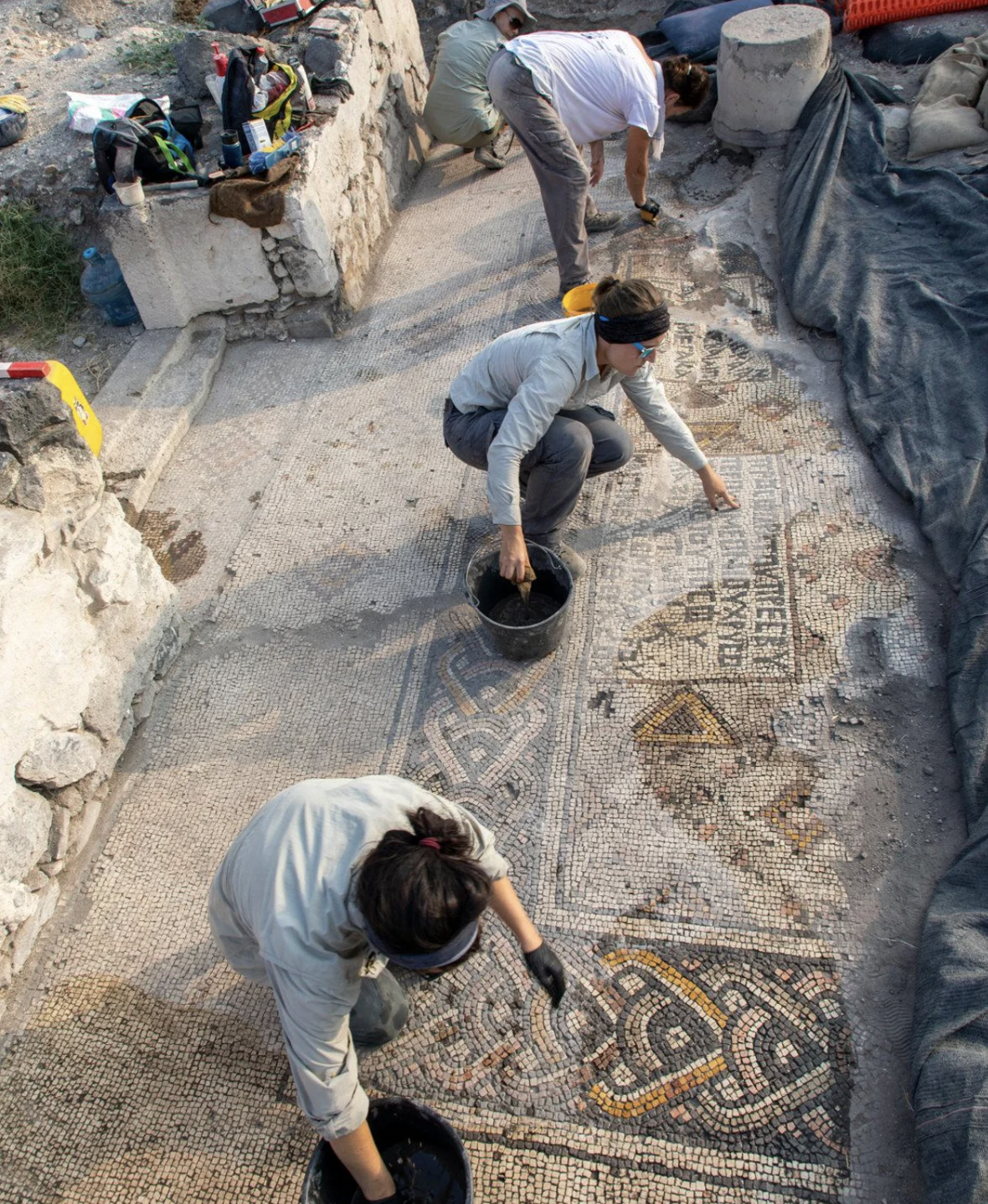 Final conservation efforts of two inscriptions in the western part of the church. (Photo: Michael Eisenberg)

The spelling and grammatical errors of the mosaic inscriptions suggest that the Greek language had become mixed up with local tongues, Staab explained.

“The language of the mosaic inscriptions shows a remarkably strong decline both in the phonetic rendering and in the grammatical rules,” Staab says. However, he qualifies: “It is difficult to draw clear conclusions from this, such as whether the people of Hippos – up to and including the clergy – no longer practiced Greek in its pure form and whether their language in everyday life was more or less blended with local influences such as Aramaic.”

Staab believes, however, that Greek was likely used on inscriptions specifically because, “it was unthinkable to come up with the idea of using a language other than Greek – even if one was aware that this language was no longer mastered to the extent actually required. The original language of Christian liturgy and prayer to God was Greek, so it had to be considered impossible to deviate from using it in the Christian context.”

Regardless of the language spoken, archaeologists believe men and women were possibly segregated during their worship at the Burnt Church.

“We know where the people stood. We know the doorways were left open during the ceremony,” Eisenberg explained. “We find the ashes of the main portals, on which were the beautiful lion-head door-pulls [found in a previous excavation] – and the chain keeping out the people who were not yet full Christians, not yet baptized. They stood in the portico of the court, where one of the new mosaics was found. They would stand outside the ecclesia looking into the Eucharist.”

A total of seven inscriptions have been found during excavations of the Burnt Church so far. The relatively small neighborhood church was built in the late fifth or early sixth century in the westernmost part of the city, overlooking the Sea of Galilee – the site where Jesus performed many miracles – in an area known today as Sussita. 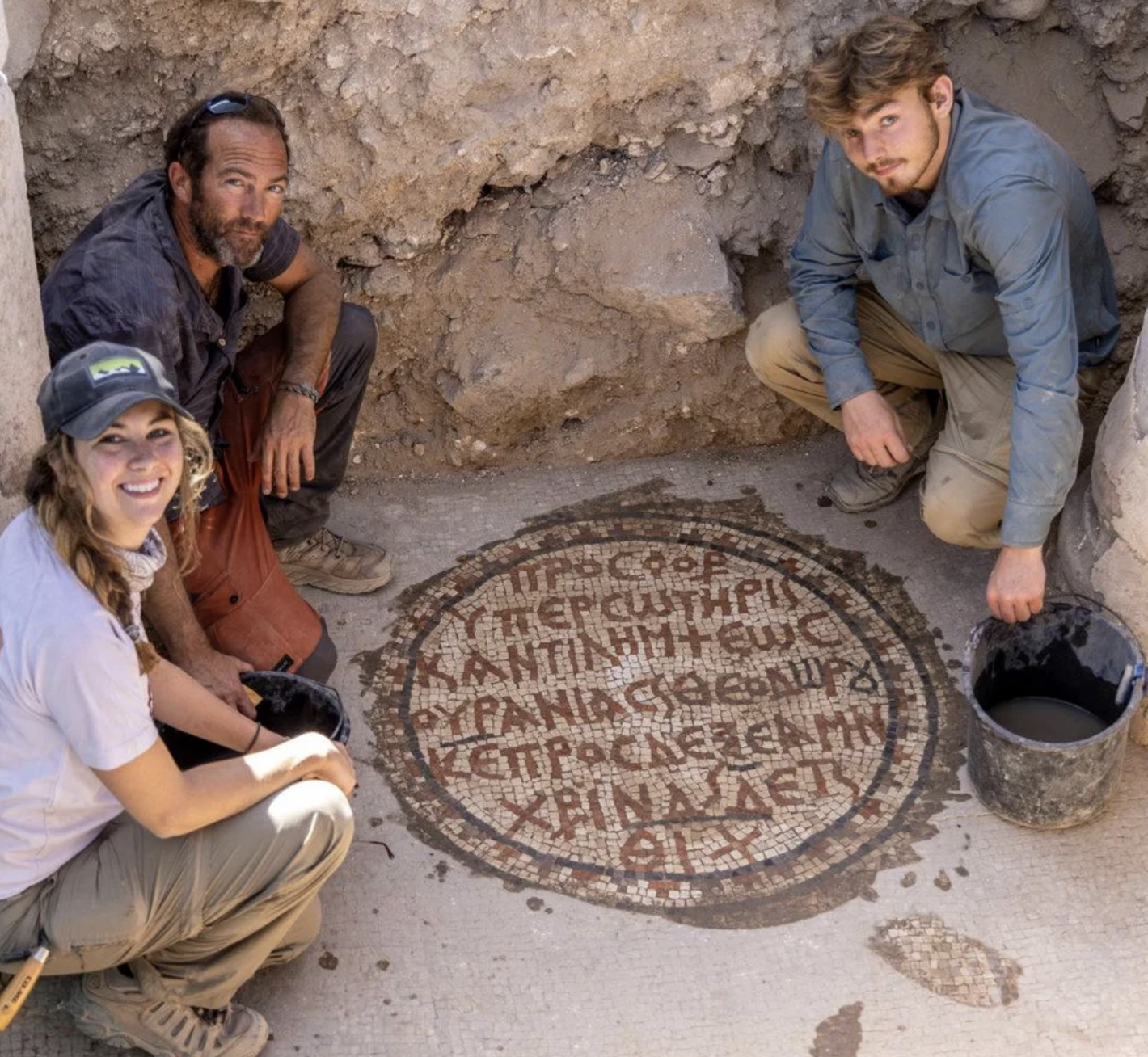 The first cleaning of the medallion inscription in the southern sideroom at the Martyrion of Theodoros. (Photo: Michael Eisenberg)

While the mosaics are considered “somewhat crude” in quality – suggesting that the community was too poor to afford a high-quality artisan – the images reflect Christian symbolism.

One mosaic on the church floor shows 12 baskets, each one containing five pieces of bread or possibly five pieces of fruits. These baskets are believed to represent the leftovers following Jesus’ miracle of Feeding the Multitude next to the Sea of Galilee, according to Eisenberg.

Other mosaics found in the church feature fish and some other birds that do not and did not exist in the Holy Land. There is also a rare image of a date palm tree.

Hippos of the Decapolis ruled the southern part of the Golan and most of the lake’s eastern shore during the Christian era. The city is believed to have been established during the Hellenistic period, but some of the oldest inscriptions in the city are three from the second or third centuries C.E. They have also discovered  remains of a base on which a statue of Emperor Septimius Severus (193-211) had been worshipped, most likely part of a Roman Basilica.

At least seven churches from the early Christian period have been found in Sussita to date.

The inscriptions from the Christian period include eight in the cathedral, Staab says, one rebuilt, approximately 35 years after the Burnt Church. Other mosaics found in the northwest portion point to the ministry of deaconess Antonia from the sixth and seventh century.

The Hippos Excavation project wants to pursue further excavation of the Martyrion of Theodorosin order to both preserve it and to open the site to the public. Our readers are invited to join the effort to dig with the team at Sussita National Park. Click here to read more about the project and to register.