WASHINGTON, D.C.—Next week, U.S. President Joe Biden will make his first visit to the Middle East since being sworn in as the American chief executive and commander-in-chief.

From July 13 through 16, Biden will meet with leaders in the State of Israel, the Palestinian Authority and the Kingdom of Saudi Arabia.

According to a White House statement, Biden is going to the region “to reinforce the United States’ iron-clad commitment to Israel’s security and prosperity and attend a summit of the Gulf Cooperation Council plus Egypt, Iraq and Jordan.”

The White House statement further noted that in Saudi Arabia, President Biden will “discuss means for expanding regional economic and security cooperation” and that he “looks forward to outlining his affirmative vision for U.S. engagement in the region over the coming months and years.”

When Air Force One flies from Israel to Saudi Arabia, it will be the first such presidential trip in that direction in history.

During the last administration, former President Donald Trump flew the other direction, taking Air Force One from Riyadh to Tel Aviv. That, too, was a first.

That Biden wants to visit Israel as president is wonderful but not particularly dramatic. Biden has always described himself as pro-Israel and even as a “Zionist.”

That Biden wants to visit Saudi Arabia is big news.

Biden and his team were extremely hostile towards the Saudis during the presidential campaign – calling the kingdom a “pariah state” – and have been far more eager for a good relationship with the Iranian regime than with the Saudi leadership for much of the first year and a half of the administration.

I have been consistently urging Biden to take a different approach towards the Saudis, to strengthen the U.S. alliance with Riyadh and even to push for a Saudi-Israeli peace agreement.

In August of last year, I made the case that Biden’s best – and maybe only – opportunity to win a Nobel Peace Prize was by brokering a Saudi-Israel normalization agreement.

In May, I reported that I was finally seeing a “big shift” in how Biden was approaching the Saudis.

The big question I’m watching for is this: Is it possible that Biden and his team are laying the groundwork for a major announcement – even full peace and normalization – between the Israelis and Saudis?

The American people certainly hope so.

Ahead of this important trip, ALL ISRAEL NEWS and ALL ARAB NEWS commissioned an exclusive poll. One of the questions we asked was this:

“Do you agree or disagree with the following statement: Now that the U.S. has helped the United Arab Emirates, Bahrain, Sudan, and Morocco sign full peace and normalization treaties with Israel, I believe that Saudi Arabia should be the next country to make peace with Israel and that President Biden should make brokering an Israeli-Saudi peace treaty one of his top foreign policy priorities.” 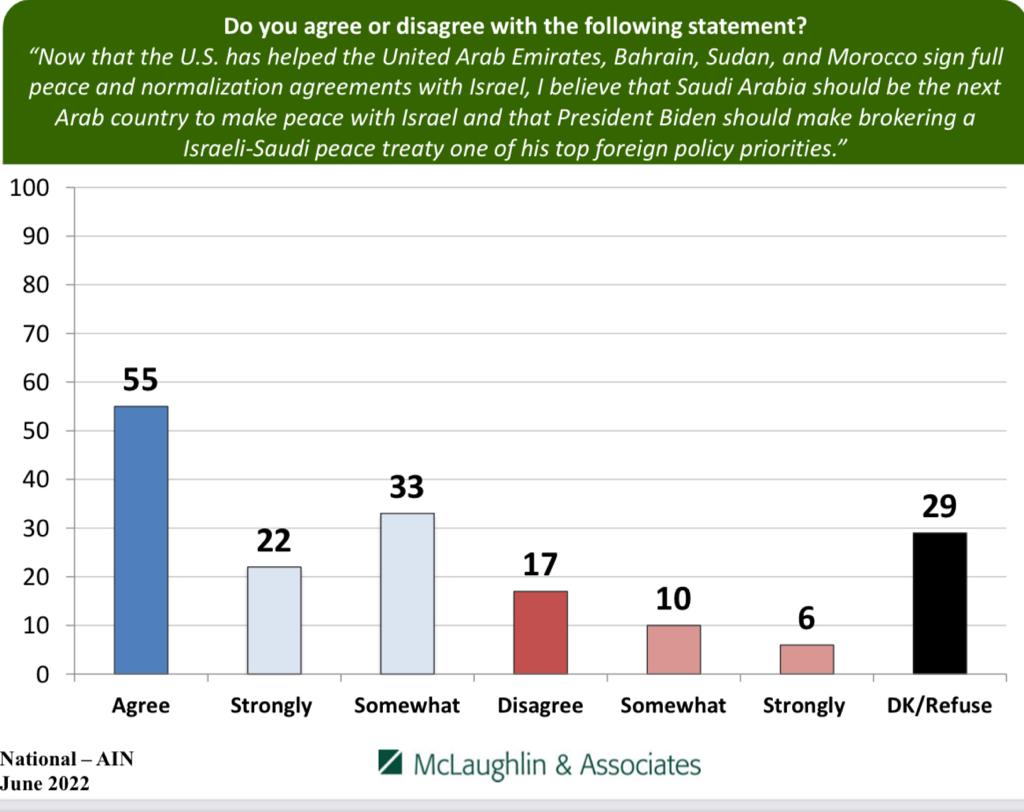 WHO CONDUCTED THE POLL?

The poll was conducted by McLaughlin & Associates, a nationally known and widely respected polling firm that has conducted scientific opinion surveys over the years for corporations, non-profit organizations, Members of Congress, and American presidents, as well as for foreign leaders, including in the State of Israel.

Near East Media – which oversees ALL ISRAEL NEWS and ALL ARAB NEWS – is a non-profit, non-partisan, and non-political organization. The results of this poll, therefore, are not intended for partisan political purposes, or to influence legislation at the international, federal, state, or local levels. Rather, this survey was taken to better understand how the American people view events and trends in Israel and the Arab/Muslim world.

COMPARING THE RESULTS FROM TWO YEARS AGO

In November 2020, ALL ISRAEL NEWS and ALL ARAB NEWS commissioned McLaughlin & Associates to do an exit poll of the U.S. presidential and congressional elections.

We asked the following: “Now that the U.S. has helped the United Arab Emirates, the Kingdom of Bahrain and the Republic of Sudan sign full peace treaties and normalization agreements with the State of Israel, I believe that the Kingdom of Saudi Arabia should be the next Arab country to make peace with Israel. The next president, whoever it is, should make brokering an Israeli-Saudi peace treaty one of his top foreign policy priorities.”

Here were the results back then:

Interestingly, 84.6% of Trump voters wanted to see the Saudis be the next Arab country to make peace with Israel.

Yet 72.5% of Biden voters also said they want to see an Israeli-Saudi peace deal and want the next president to give it a big push.

Fully 82% of white “born again” Evangelical Christians want to see a Saudi-Israel peace deal happen and want the next U.S. president to make it a priority

Nearly two years later, a majority of Americans – including a majority of Democrats – want to see the Saudis make peace with Israel and want Biden to make a major push for such a deal, but clearly the numbers have dropped.

The most likely reason for this drop is how hostile Biden and his team have been towards the Saudis.

Biden has accused Crown Prince Mohammed bin Salman (MBS) as responsible for having ordered the murder of Saudi dissident Jamal Khashoggi, even though the administration has offered no proof that MBS actually issued such an order, or even that he definitely knew ahead of time that Saudi operatives were going to Turkey with the intention of killing Khashoggi.

Biden has refused to talk to MBS since taking office.

Biden has been refusing to agree to new arms sales.

Even in recent days, Biden has hedged on whether he will speak directly with MBS, even though King Salman is ill and MBS is the de facto ruler of the country.

What’s more, Biden has done little to signal that he is working hard to expand the number of Arab countries who will sign onto the Abraham Accords.

Thus, Americans have less enthusiasm or even optimism for a Saudi-Israeli deal than they did in the fall of 2020 when one Arab country after another was making history by making peace with Israel.

Still, the important thing is that a solid majority of Americans – including a majority of Democrats – do want to see a Saudi-Israeli peace agreement.

And they want Biden to take the lead and make it happen.

Let’s dig deeper into the data.