Colombia has opened a trade office in Jerusalem which Israel considers implicit recognition of the sacred city as the Jewish state’s de facto capital.

Brazil, Hungary and the Czech Republic also have trade offices in Jerusalem, while the United States, Guatemala and Honduras have embassies in the city.

However, Colombian President Ivan Duque Márquez who arrived in Israel on Sunday for a three-day state visit, did not attend the opening of iNNpulsa, the government's entrepreneurship and innovation agency.

Though his visit was characterized by warm interactions with Israeli leaders, Duque told The Jerusalem Post that not attending the trade office opening “doesn’t mean anything,” and when asked whether this represents Colombia’s recognition of Jerusalem as Israel’s capital, he said, “We have to be very practical.”

“I am visiting Jerusalem, staying in Jerusalem, visiting the Prime Minister’s Office, the President’s Office in Jerusalem,” Duque said. “Our presence here, a state visit, is a symbol that we are here to strengthen the bilateral relationship.”

Israel’s President Isaac Herzog received the Colombian head of state at the president’s official residence in Jerusalem on Monday and praised his decision to open its first innovation office abroad in Israel’s capital.

“I welcome your inauguration of an innovation office in Jerusalem, the first of its kind outside of Colombia,” Herzog said. 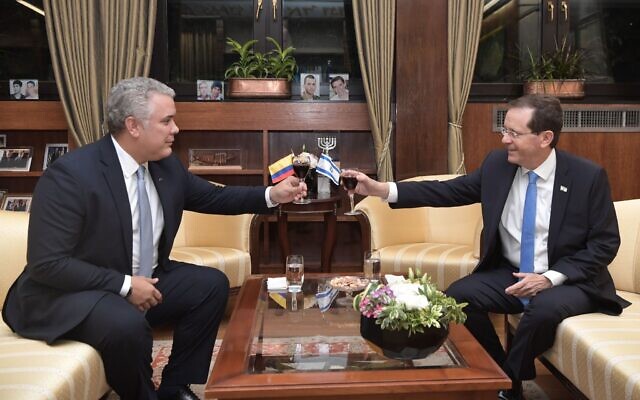 The Israeli president stressed the mutually beneficial emerging bilateral trade between Colombia and Israel following the signing of a free trade agreement in 2020 and said both countries want to increase trade.

“We want to triple exports in the next few years. We want to boost connectivity, artificial intelligence, internet of things, agricultural technology and attract more Israeli technology in our country,” Duque said.

Turning from shared opportunities to shared threats, Herzog urged Colombia to confront Iran, which threatens the borders of both countries.

“Like Israel, I know that Colombia is concerned about Iran and Hezbollah’s terror cells being established on your border with Venezuela. From many years of experience, it is clear that these forces must be stopped swiftly – if not a minute sooner,” Herzog said.

The powerful Iranian-backed terrorist proxy Hezbollah has a strong presence in Colombia’s neighbor, Venezuela, and is backing the Venezuelan regime, which enjoys close ties with Iran. The growing Islamist presence in Venezuela concerns not only Colombia but also the United States and its allies like Israel. In addition, it also poses a security threat towards Jewish communities in South America. In 1994, the Jewish community center in Argentina’s capital Buenos Aires was bombed by Hezbollah, killing 85 people and wounding hundreds of civilians. 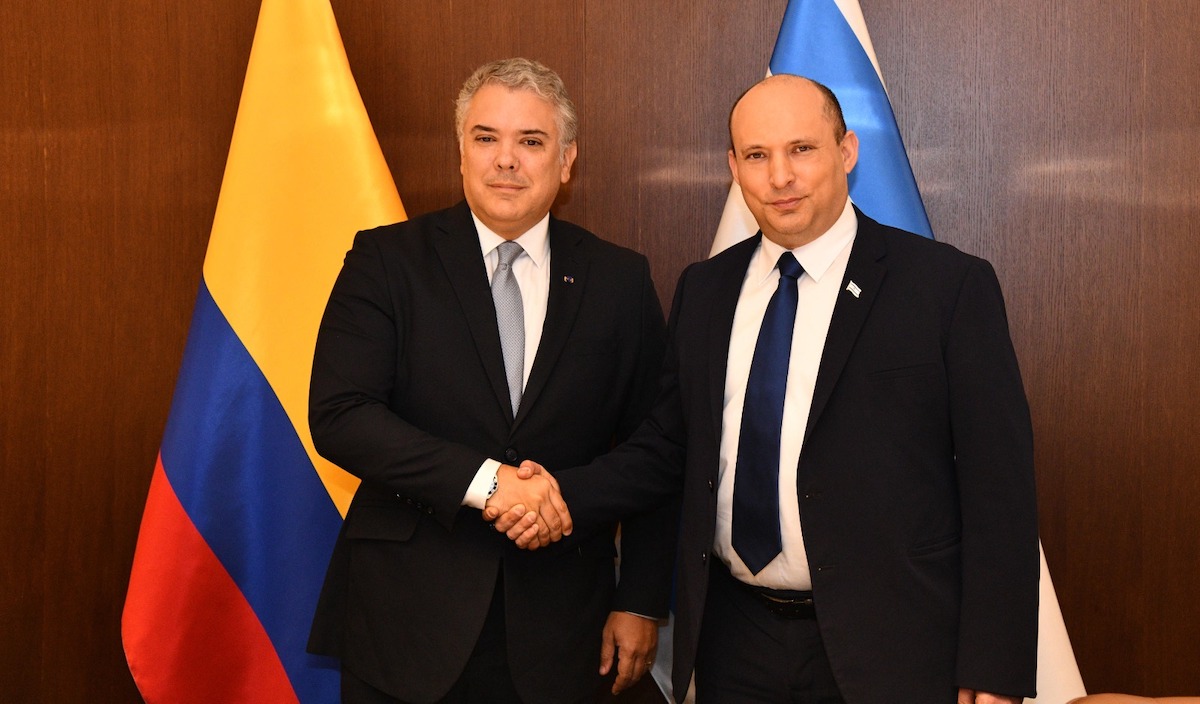 “Over the years, the relationship between Israel and Colombia has evolved greatly, and having you here in Jerusalem to open the first Colombian innovation office is a sign that our relationship is growing stronger than ever,” Bennett said. “Technology and innovation can do remarkable things, not just for both our countries, but for the entire world.”

In 2019, bilateral trade between Colombia and Israel amounted to approximately $450 million. Israel’s main export items to Colombia were machinery equipment while the Jewish state mainly imported mining products from Colombia. Given the signed free trade agreement in 2020, the sky appears to be the limit for future bilateral trade between the countries.