Israeli President Isaac Herzog opened the seventh Global Forum to Combat Antisemitism in Jerusalem last week saying that timing of the conference was especially poignant because “the challenge is becoming much more difficult and bigger.”

“All of a sudden the ground exploded in a very disturbing way all throughout the world, and we have seen things that we haven’t seen for many decades – direct physical violence against Jews in London and in other places in Europe and the United States,” he said.

The GFCA is considered the “premier biennial gathering for assessing the state of anti-Semitism globally, and formulating effective forms of societal and governmental response.”

But Israel’s Foreign Minister Yair Lapid drew fire for his speech in which he equated anti-Semitism with other forms of hatred. 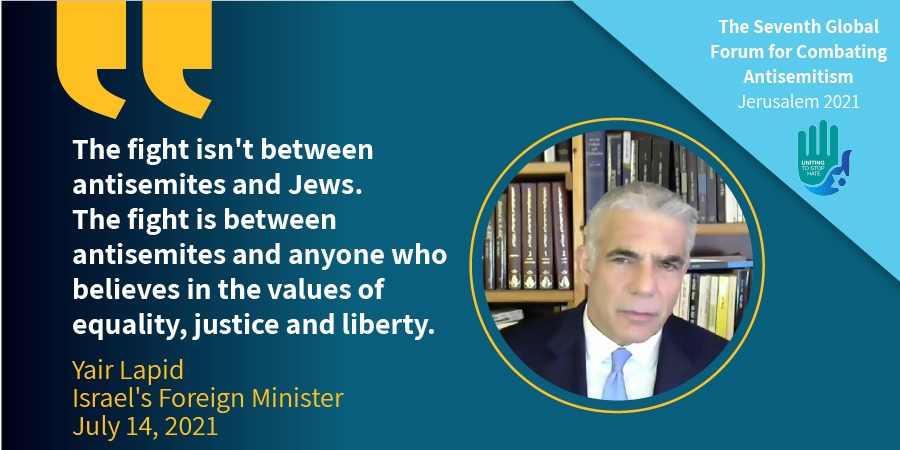 “Yair Lapid erred in minimizing and stretching the concept of anti-Semitism this week … . If this is what the foreign minister says, how will the State of Israel go on demanding that the countries of the world continue to invest special effort in protecting Jewish communities abroad from anti-Semitic attacks?” Netanyahu said on Twitter.

“Even though anti-Semitism, hatred of Jews, is part of the general human phenomenon of hatred of the foreigner, it is different from that in its strength, its durability over thousands of years and its murderous ideology that has been nourished throughout the generations in order to pave the way for the destruction of Jews,” Netanyahu said.

Chairman of the World Zionist Organization and Acting Chairman of the Executive of the Jewish Agency Yaakov Hagoel noted that “anti-Semitism is hatred of Jews because they are Jews.”

“Millions of Jews have been massacred in the name of anti-Semitism … The hatred of man against man exists today, but it does not detract from the unique phenomenon called anti-Semitism which is defined in every dictionary as hatred of Jews,” he said.

Lapid responded to critics which he called “members of the extreme right.”

“Turns out not only do they seek to destroy Israeli society but are even willing to help anti-Semites for the sake of a political blow,” he said.

But Lapid’s comments are reflected in what seems to be a new Israeli strategy, long recommended by the Organization for Security and Cooperation in Europe (OSCE), to tackle anti-Semitism alongside other general racism and discrimination, not as a stand-alone issue.

The conference dealt with strategies for handling the escalation in anti-Semitic incidents which rose 75% in the U.S. and 591% in the United Kingdom after the Israel-Gaza conflict in May which lasted 11 days, according to the Anti-Defamation League.

This latest military conflict led to “a paradigm shift” in how anti-Semitism manifests and “provided a license to discriminate against and target Jews for their possible association with the Jewish state,” said William C. Daroff, CEO of the Conference of Presidents of Major American Jewish Organizations.

“It has been clearly demonstrated in the past few months that the line between anti-Zionism and anti-Semitism has almost ceased to exist,” he said.

A rise in progressive politicians in both the U.S. and Europe has also served to popularize anti-Israel sentiment in government.

“This is a new global trend that we are witnessing in many capitals,” said Sharon Nazarian, the ADL's senior vice president of International Affairs. “It’s about color power issues, about privilege, and yet that movement was put on the Palestinian-Israeli conflict. This was the first time we were seeing much more pervasive, much more mainstream.”

Nazarian said that violence against Jews does “not occur in a vacuum,”and that attacks “are partly fed by a growing mainstreaming of anti-Israel approaches within certain parts of American society and in parts of Congress.”