JERUSALEM – Israel is not only waging a war against terrorists in Gaza but against a barrage of slanderous lies being told in the mainstream media, on cable news networks and on social media all over the world.

That’s why ALL ISRAEL NEWS Founder and Editor-in-Chief Joel C. Rosenberg has been doing interviews all week from Israel’s capital to explain exactly what is happening here and why it matters.

On Wednesday night, Rosenberg was a guest on “Just the Truth,” a new program broadcast on a new cable and digital news platform known as Real America’s Voice.

Rosenberg told host Jenna Ellis that it was imperative that U.S. and other world leaders tell the truth about who the aggressor is in this conflict – Hamas and Islamic Jihad – not Israel, which is trying to defend its citizens and did not start this war.

“That's the highest moral responsibility of any government, to defend its people,” Rosenberg said. “And that's what Israel is doing.”

He also explained that “the Palestinians are living under slavery – under hostage conditions – in Gaza by the Hamas regime. They're suffering.”

At the time of the interview, U.S. President Joe Biden had not made any public, on-camera remarks about the war in Gaza.

On Thursday, Biden briefly answered a question about the war at a press conference, but did not mention the words “Hamas” or “Islamic Jihad” and did not condemn the terrorist organizations for their attacks against Israel or for being guilty of war crimes.

Here’s the full transcript of the 8-minute interview:

Former President Trump issued a statement yesterday afternoon saying this: “When I was in office, we were known as the presidency because Israel's adversaries knew that the United States stood strongly with Israel and there would be swift retribution if Israel was attacked. Under Biden, the world is getting more violent and more unstable because of Biden's weakness and the lack of support for Israel is leading to new attacks on our allies. America must always stand with Israel and make clear that the Palestinians must end the violence, terror and rocket attacks, and make clear that the U.S. will always strongly support Israel's right to defend itself. Unbelievably, Democrats also continue to stand by crazed anti-American Rep. Ilhan Omar and others, who savagely attack Israel while they are under terrorist assault.” 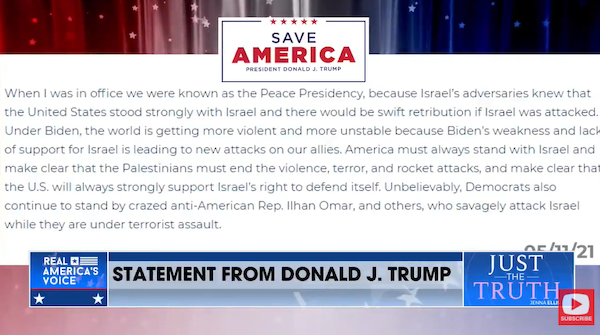 In case you're wondering, this is what real leadership looks like. So where is our supposed current president Earth to Joe Biden? Will he also reiterate that America stands with Israel?

Joining me now live from Jerusalem to discuss is Joel Rosenberg, founder and editor in chief of ALL ISRAEL NEWS. Joel, thanks so much for joining me tonight. And first, I'm very glad that you are safe.

ROSENBERG: Thank you, Jenna. I appreciate it. It's been a very, very hard several days.

ANCHOR JENNA ELLIS:  Yes. So, what is the update there from Jerusalem?

ROSENBERG: Well, even since you and I have been texting throughout the afternoon, we're close to 1,500 rockets having been fired at us. Each one of these, Jenna, is a war crime. It's a double war crime. And what I mean by that is that these rockets that are being fired from the Gaza Strip – by either Hamas or their partners in crime, the Islamic Jihad – these are fired from civilian population centers, from schools, from playgrounds, from hospitals, from mosques, from factories. And they're using Palestinians in Gaza as their civilian shields, their human shields. And so that's one war crime. Then, when they fire at Israeli civilians – at our schools, our kindergartens, our playgrounds, our homes, our apartments, our businesses, that's a second war crime.

ELLIS: Yeah, and so what does it say to you when former President Trump was the first to issue this strong of a statement and Joe Biden has still not made any specific public declaration?

ROSENBERG: Yes, well, I wrote about this at ALL ISRAEL NEWS today. It was our lead story for most of the day until it got overwhelmed by so many other things that are happening. It's a dereliction of American leadership. Now, listen, you and I have talked about this. Joe Biden is the best the Democratic Party has when it comes to being pro-Israel. You know, I don't say that he's not pro-Israel. And he claims that he's a Zionist. And he's got crazies in his party. Congresswoman Omar is one of them. Rashida Talib is another, radical Palestinian congresswoman. And there are others who hate Israel and actually side with the forces of terror.

So, Joe Biden – President Biden – is the best that the Democratic Party has. But up until just about an hour and a half ago, he hadn't even called the Prime Minister of Israel to provide support, to provide encouragement, to provide solidarity. He hasn't gone on camera, so far as I'm aware – as you and I talk – even to condemn Hamas and Islamic Jihad. And he has affirmed, at least in this phone call – we understand – with Netanyahu, Israel's right to self-defense. Okay, thank you.

The point [that needs to be made] is to condemn and make it clear that Hamas and Islamic Jihad are the terrorists and Israel is defending itself. You have to make that clear because the whole world is watching. All the other terror groups – including the terror regime in Tehran, the Iranians – they're watching. And they're watching not just to see how Israel handles this crisis, but how President Biden handles it. And so far, he looks he's not saying anything. And his team is making mealy-mouthed statements like the State Department spokesman, saying “both sides need to de-escalate.” What does that mean when a terrorist is shooting at you? What does it mean to de-escalate? We're not supposed to defend our people? That's the highest moral responsibility of any government – to defend its people. And that's what Israel is doing. And unfortunately, the Palestinians are living under slavery – under hostage conditions – in Gaza by the Hamas regime. They're suffering, too.

ELLIS: Yeah, well, this is coming from the president who also claims to be Catholic, yet won't stand up for pro-life. He claims to understand national security, but won't protect America's borders. And so, you say he claims to be a Zionist? Well, if it follows all of the other trends with President Joe Biden, he's not going to be very strong either. But in the last minute that we have here with you, Joel Rosenberg, why is it so important – beyond just the obvious reason that defense is very different than being an aggressor – but why is it so important from a biblical perspective that America stands with Israel?

ROSENBERG: Well, from a biblical perspective, God says very clearly in the Scriptures – and I'm from a Jewish background on my father's side, but I'm a follower of Jesus Christ. I'm an Evangelical and am unabashed on that. And the Bible makes it clear that God says, “I will bless those who bless you – meaning Abraham, Isaac, Jacob, the nation of Israel – and I will curse those who curse you.” So, that's a pretty fundamental principle that you don't want to get on the wrong side of. But just from a regular geopolitical perspective, for America to be strong against enemies like Iran, North Korea, Russia, China, you have to stick close to your allies. And when your ally is under attack by almost 1,500 rockets and you sort of can't quite find your moral compass, that is a bad message to everybody. And it makes Americans in more danger, not just Israelis.